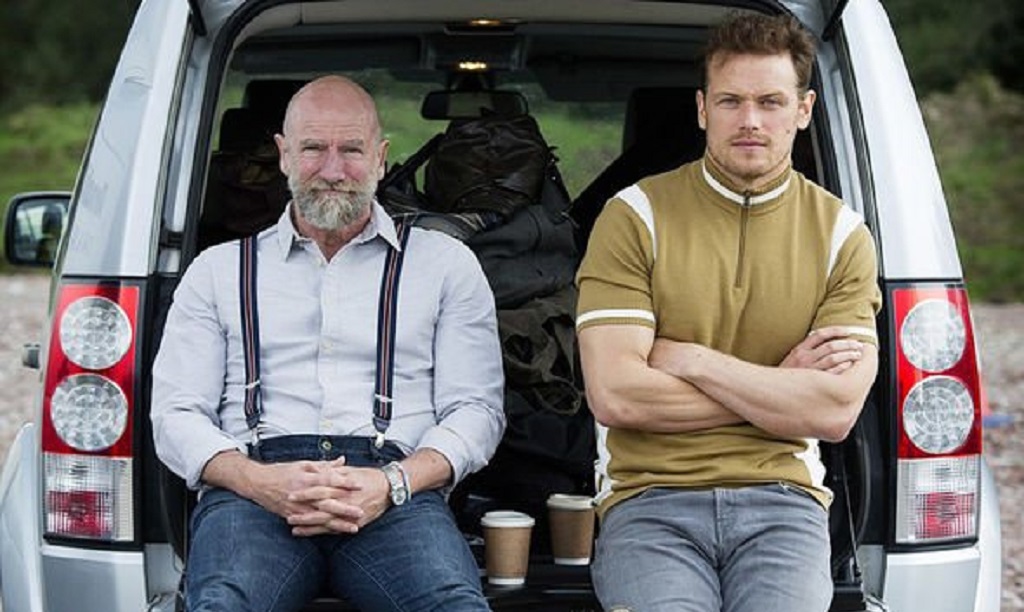 For Starz series Men in Kilts, Sam Heughan got behind the wheel as he and Graham travelled across Scotland exploring the history, food and culture. However things didn’t get off to the best of starts as Sam struggled with driving their camper van, which left Graham questioning his driving abilities. Speaking exclusively to Express.co.uk, Graham opened up about the series and how Sam loved to “torture” him on set.

Asked if the Outlander star was really bad at driving, Graham laughed: “It’s difficult to know I mean, the whole situation with getting into the van for the first time, I really did assume that he knew what he was doing.

“I was basically too hungover to drive. He seemed fine.

“He got in and immediately crashed the gears. He forgot to take the handbrake off.

I was like, ‘Have you driven one of these before?’

“He was like, ‘Well, I’ve never driven one of these before and it’s been about six years since I’ve driven a stick shift.’

“I thought, ‘Well what could possibly go wrong?’”

Speaking fondly of Sam, Graham continued: “He’s quite cavalier, and for Sam consequences are just fun things that haven’t happened yet.

“So he doesn’t think maybe that’s a bad idea. He thinks let’s see how much fun I can get out of this.

“That goes with the driving, with terrifying me at Greyfriars Kirkyard, with insisting that I absail off the side of a 320 foot cliff, you know, surfing in the North Atlantic.

“Yeah. His goal was, essentially, to torture me.”

It’s not the first time Sam’s driving has been questioned as earlier in the year, he admitted he made a few enemies on the road trip. Appearing on Live with Kelly and Ryan, the actor was asked who was a better driver. “Well this is a really great point and I’m glad you brought it up,” Sam smiled.

“Because Graham didn’t do any of the driving. I mean, that’s how he likes it.

Going on to detail how he angered marathon runners, he continued: “We were driving into a castle which managed to be somehow on the course of a marathon and the marathon runners were trying to get past us and I kind of got the camper van stuck in the gate of the castle.

“No one could get past us thereby ruining everyone’s personal best time on the marathon. They weren’t best pleased.”

Sam added it “wasn’t one of my proudest moments” and could understand how frustrated they would be.

“As a keen marathon runner myself, I know how frustrating it is,” he told the hosts.

Maybe for the second season, if there is one, viewers could see Graham get behind the wheel of the camper van?