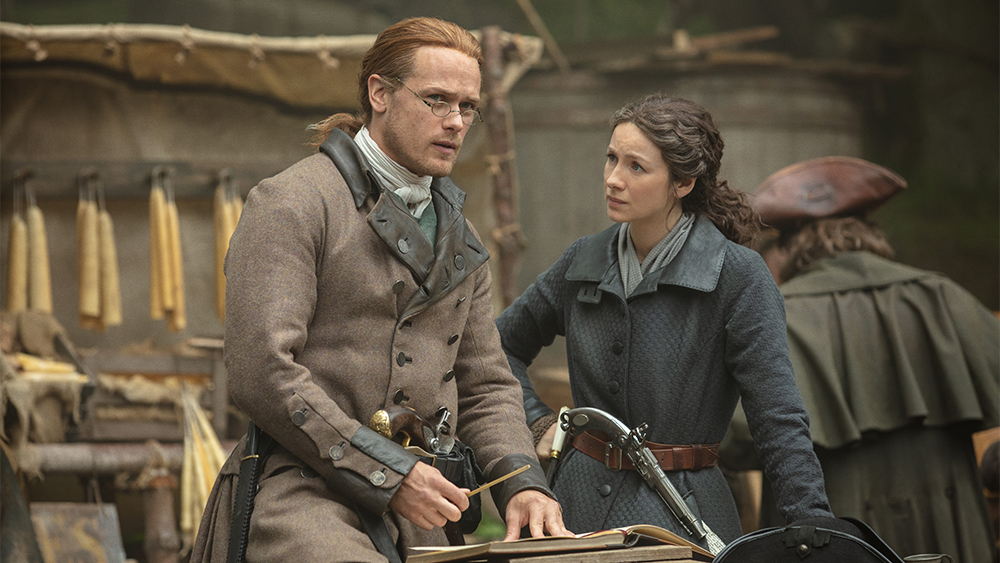 Outlander fans haven’t seen any new episodes in nearly a year, and the season 6 premiere is still months away. To help fans get through this extra-long Droughtlander, the Starz time-traveling drama has launched an official podcast.

Filming for ‘Outlander’ season 6 is well underway
After a nine-month delay due to the pandemic, the Outlander cast and crew began filming season 6 in February. They are filming in Scotland inside a production bubble with everyone getting tested regularly.

This approach to on-set safety has allowed them to keep those steamy scenes between Jamie (Sam Heughan) and Claire (Caitriona Balfe). As well as those epic battle scenes with a large cast.

As a rule, it takes about ten months to make an entire season. If they keep a similar schedule for season 6 production, fans can expect new episodes in late 2021 or early 2022.

Sophie Skelton (Brianna Fraser) and Richard Rankin (Roger McKenzie) have also been giving fans a peek at the set and the hair and makeup room. They’ve also posted selfies from Fraser’s Ridge.

César Domboy (Fergus) and Lauren Lyle (Marsali) play husband and wife on-screen. But off camera they are BFFs who enjoy posting mirror selfies and giving fans a look at places like the prop room and wardrobe department. John Bell (Young Ian) and his dog Rollo are also big stars on TikTok.

“Introducing the Official #Outlander Podcast: Droughtlander edition! Over the coming months, @TheMattBRoberts and guests will give you the behind-the-scenes scoop on what goes into making the show” the official Outlander account tweeted.

The first episode has been posted
On May 4, Roberts posted the first episode of his new podcast that featured his discussion with executive producer Maril Davis. During the 20-minute episode, Roberts and Davis talked about what it takes to build a show like Outlander and get new episodes on the air.

The duo answered questions about their own careers, how Outlander has affected film and TV production in Scotland, and how difficult it is to translate the original source material to television.

According to Davis, it’s “become 10 million-thousand-gabillion times harder” to bring Diana Gabaldon’s books to the screen as the seasons have progressed.

“The first book, first season was by far the easiest because that book just translated really well,” Davis said. “It was a clear point of view. There’s just some very clear storytelling routes that I think as the books go on it becomes a little more difficult.”

The ‘Outlander’ podcast features questions from fans
Because the podcast was made for “thirsty” Outlander fans who are needing new content, Roberts is getting them involved. Before each episode is recorded, the Outlander twitter page asks fans if they have any questions for upcoming guests.

Episode two will feature Elicia Bessette and Michael O’Halloran, who are part of the Outlander post-production team.

“The next podcast will cover post-production AKA all the magic that happens between filming being wrapped and the final, beautiful #Outlander you see on screen. Drop your questions for Elicia and Michael below,” the show tweeted on May 5.

My name is Damyan Ivanov and i was born in 1998 in Varna, Bulgaria. Graduated high school in 2016 and since then i'm working on wordpress news websites.
News, outlander, Outlander podcast, TV Series