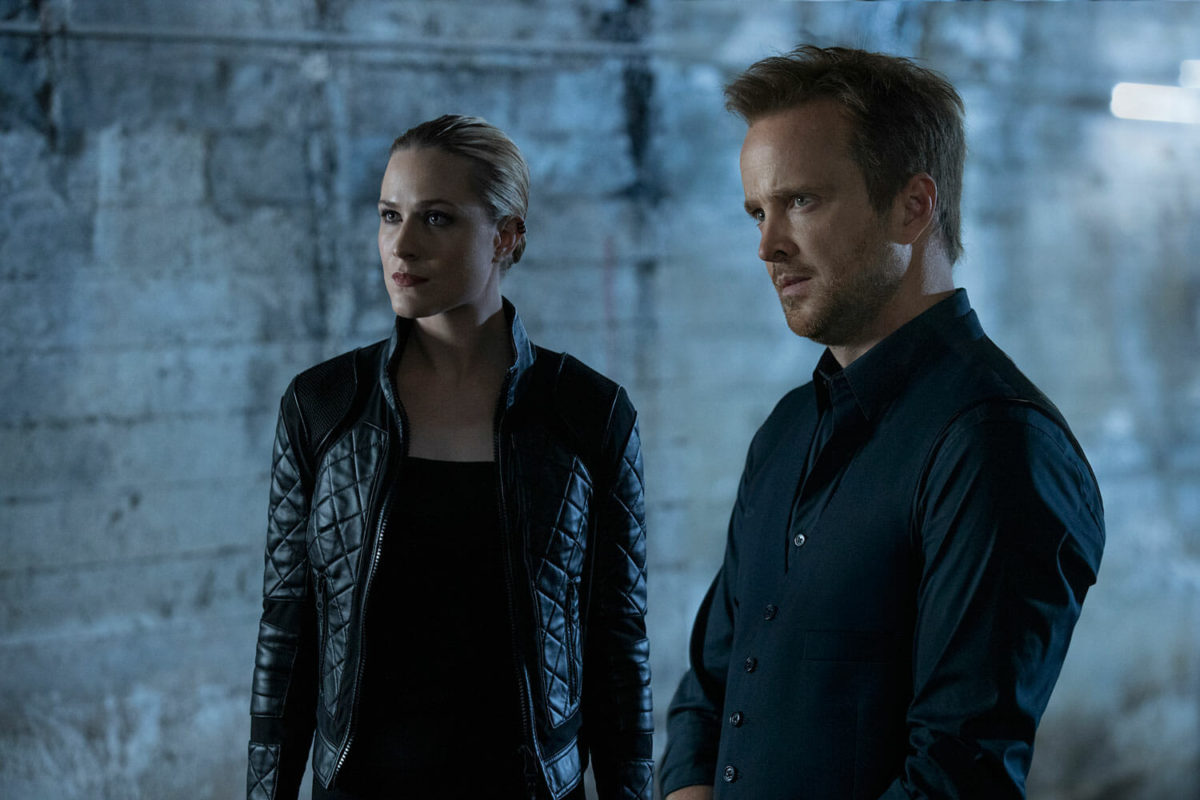 SPOILER ALERT: Do not read if you have not yet watched the seventh episode of “Westworld” Season 3.

The penultimate episode of “Westworld” Season 3 finally gave viewers the Dolores-Maeve showdown that had been teased all season long, and it did not disappoint.

DO NOT MISS:
* ‘The Vampire Diaries’ star Paul Wesley directed an episode of Batwoman (Pictures)

But prior to that, Dolores (Evan Rachel Wood) and Caleb (Aaron Paul) arrived at Serac’s (Vincent Cassel) facility in Mexico where he imprisoned those who he deemed outliers to his world view. It was also where he had been keeping his old super computer Solomon under lock and key. After wandering through the halls and engaging in a long conversation with Solomon, Caleb managed to piece together the fragments of his memory to make one whole, traumatic picture.

It turned out that he had been identified as an outlier after being discharged from the military. He was taken to this facility and reprogrammed by Serac’s sick psychiatrists to hunt down other outliers with his partner Francis (Kid Cudi), using Serac’s Rico application. All this time Caleb thought that Francis was died in an attack on their army unit, but now he remembered that he killed his best friend in a dramatic, almost Western style shoot-out after Rico offered both men an exorbitant amount of money to kill each other.

During this whole epiphany, Bernard (Jeffrey Wright) and Stubbs (Luke Hemsworth) freed William (Ed Harris) from another twisted Serac facility, and together they set off to find Maeve (Thandie Newton) and Dolores. However, William still despised hosts and trusted them even less after being betrayed by host Hale (Tessa Thompson).

Got all that? It is admittedly, a little confusing, so without further ado, Variety presents five of the most burning ones from an action-packed episode.

Which other hosts will Serac bring to the table?

The very beginning of Episode 7 saw the return of two hosts, namely Clementine (Angela Serafyan) and Hanaryo (Tao Okamoto), who were now under Serac’s control. The Big Bad had them take out the Musashi (Hiroyuki Sanada) version of Dolores, beheading him in a restaurant in Indonesia for good measure. But this led to the question of which other hosts Serac will reanimate to do his bidding? He already had Maeve and now these two under his little finger, so clearly he was taking a page out of his own outlier hunting playbook, sending more and more hosts after each other.

When will William do something useful for once?

After almost an entire season of being disoriented and mentally scarred, it appeared that William had finally been jolted back to reality by the not-so-conventional therapy he received while in captivity. Surely that means he’s now thinking logically and has realized that humans are his real enemies, not hosts, right? Wrong. He, Bernard and Stubbs barely set foot outside the facility when William found a shotgun on the floor and turned it on his rescuers. For crying out loud, William, these men just rescued you from an eternity trapped in mind prison hell, is pumping them with lead really how you’re going to repay them? This seemed like an ideal opportunity for William to learn to trust someone for the first time in his life, not to betray them for his own gain. One can always hope, right?

What happens when an unstoppable force meets an immovable object?

At the same time as Caleb was having his deep, meaningful conversation with Solomon, Maeve and Dolores were engaged in an epic battle across the Mexican compound. Interestingly, they both brought a fellow piece of tech to the party, with Dolores using a drone-controlled sniper rifle and Maeve, a flying transport machine with considerable firepower. After some Katana action in the kitchen — and a tense final knife fight in a barn — Dolores got her arm blown off and crawled back to Solomon’s hangar. Maeve followed, looming over her, about to deliver the final blow when suddenly Dolores pulled the plug…

How long will Dolores and Maeve be out of commission?

Just as it seemed Dolores was about to become spare parts, she smashed the “on” button of a massive EMP device that was being used to keep Solomon in check. All three machines present (Dolores, Maeve and Solomon) immediately shutdown. Caleb emerged from the vast underground chamber where all the outliers were suspended in pods to find a one-armed Dolores lying motionless on the ground. While it would seem logical that Caleb would try and find a way to revive Dolores, he seemed to have other, more pressing plans.

What is Solomon’s final strategy and can Caleb enact it?

Not only has Caleb learned the truth about his past, but Solomon has also given him the final strategy to defeat Serac and free humanity from Incite’s controlling narrative. But there was still no indication from Solomon or Caleb what this supposedly devastating plan entailed. We know that Dolores described it as her final hope to ensure the hosts’ survival, yet so far Serac has been one step ahead at every turn. Perhaps the finale will give some insight as to how the tables will be turned. In the final shot of Episode 7, a mysterious voice told Caleb that it had instructions for him. Who could it be? Guess we’ll have to wait until next week to find out.

DO NOT MISS:
* Could ‘Riverdale’ Adapt ‘Afterlife with Archie’ Horror Comic Series.