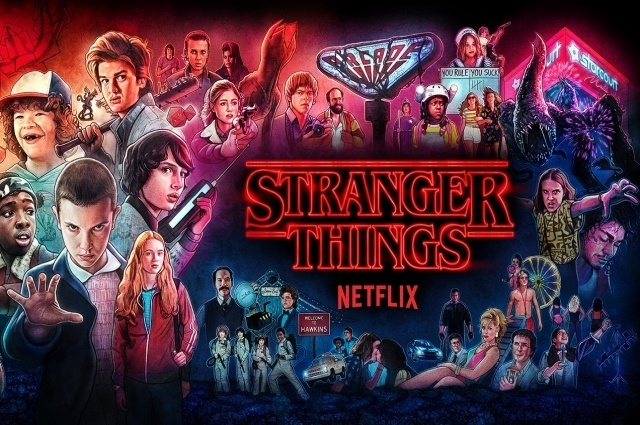 Recently leaked photos from Stranger Things’ Season 4 filming shows a new character joining the cast, and potentially one that works at the same rental video store as Steve (Joe Keery) does in the upcoming season.

Twitter user @Keeryluv shared photos on Twitter of the new cast member, who looks to be a punk-rocker entering the same video rental store that fans speculated Steve works at in Season 4, based on previously leaked photos.

The as of yet unnamed character could also be a cinephile that frequents the store and takes a personal interest in getting to know Steve. So far, the only photos we see of the new character are ones in proximity to Steve, which suggests that at the very least, these two characters will come to form a relationship of sorts though it’s unclear as to what kind at this moment.

Fans determined that Season 4 of Stranger Things will take place in 1986 based on the posters shown in previously leaked photos of the video store setting. Tom Hanks’ The Man with One Red Shoe and Michael J. Fox’s Teen Wolf debuted in 1986, and both movie posters are seen prominently in the storefront.

The new characters’ aesthetic would also support this theory as their style resembles a mix between Billy Idol and the Dead Kennedys, both of which were popular in the same year as well, with Billy Idol even having a track on Top Gun’s motion soundtrack.

Although plot details for the new season are scarce, leaked photos have determined some facts for the upcoming world of Hawkins. Lucas (Caleb McLaughlin) was shown working a job in a Japanese-themed restaurant in Starcourt Mall. Sheriff Hopper (David Harbour) proved in recent photos to have survived his apparent death in Season 3 and is weathering out the harsh conditions of a Russian prison camp

Another shared photos from the writers’ room of Stranger Things, disclosed that the upcoming season will likely have a pep-rally scene.

Stranger Things’ Season 4 is amidst production, after a production halt due to the coronavirus (COVID-19) pandemic. During the hold, writers completed Season 4’s script.