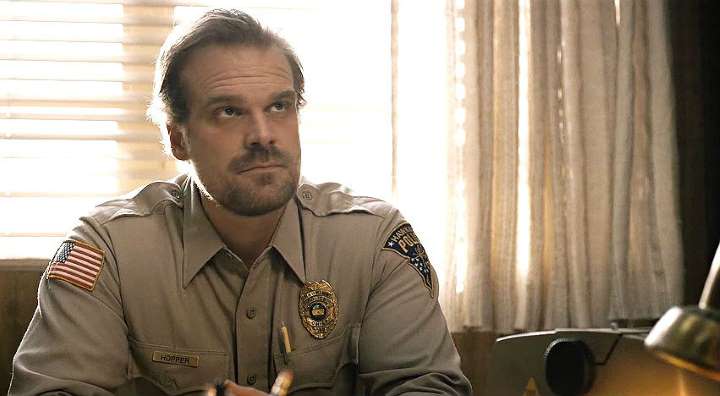 Stranger Things’ David Harbour has teased that the upcoming fourth season of Netflix’s sci-fi hit will contain some big reveals about Chief Hopper’s past.

With Harbour’s fan-favourite character set for a surprise return (many believed him to be obliterated following season 3’s climactic explosion), it sounds like his mysterious history will come to the foreground.

Chatting to Deadline over video recently, the actor confirmed that we will “get to see some of Hopper’s deep backstory”, adding: “I’m really excited to let people see these really deep colours in him.

“Each season we see a different side of him. Last season was… a bit wackier, and I loved playing that.

“Now [in season 4] he is painted in a bit of a darker palette – he’s able to express some of these really deep things that we’ve… hinted at with the boxes in season 2.”

Hopper’s plight will undoubtedly be a highlight in the new episodes, but Harbour also teased “monsters and horror, and scares”, plus “some great Indiana Jones-type action”.

The actor, who makes his MCU debut later this year in Black Widow, went on to share that production on season four had been under way for “a couple of weeks” prior to the coronavirus pandemic.

“We don’t really know what the future holds,” he said of the filming hiatus. “I don’t feel like anybody knows. We’re all playing it by ear.

“We want to get up and running as soon as possible.”