Supernatural and Arrowverse on a Crossover in Legends of Tomorrow 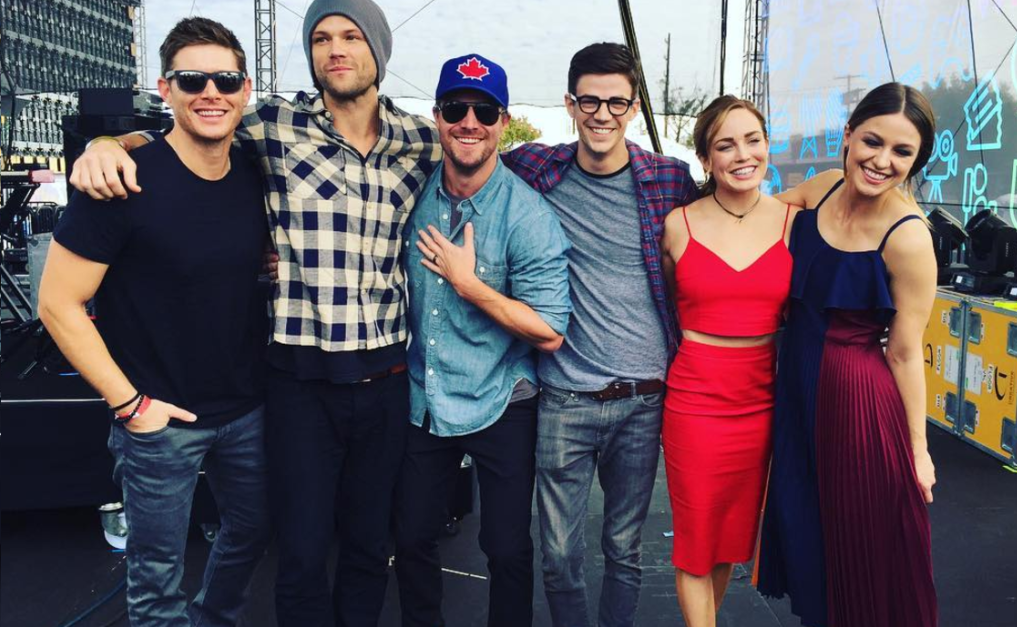 Supernatural will finally crossover with the Arrowverse in an upcoming Legends of Tomorrow episode.

A surprising number of The CW’s current series share a universe thanks to the “Crisis on Infinite Earths” event that united the network’s superhero shows, but Supernatural has stayed stubbornly out of the Arrow-verse even after it revealed its own multiverse. Now, however, some official Legends of Tomorrow images show a Supernatural icon in the mix with several Legends, raising the question: is Supernatural finally joining the Arrow-verse? The answer may not be so simple.

The Legends of Tomorrow episode that is getting supernatural, called “Zari Not Zari,” will air March 24. Sara, Constantine, and Charlie will wind up in British Columbia on the search for another piece of the Loom, but the episode description reveals they’ll “run into a problem they couldn’t have foreseen.” Nothing too out of the normal here, right? The Legends often run into problems they didn’t see coming. Those problems just don’t generally involve the Winchesters’ Impala from Supernatural:

The license plate and symbols in the trunk leave no room for doubt. There’s also the corpse in the trunk, which would never be too surprising to find if the Winchesters are on a case. Another image gives a slightly better look at the corpse, and it’s enough to pretty much confirm that Legends didn’t kill off Sam or Dean in a time travel misadventure: The dead guy does seem to be wearing the classic plaid shirt and layers of a Winchester, but I’m guessing Adam isn’t coming back to Supernatural’s final season just to be killed off on Legends of Tomorrow, and that body doesn’t look like Jensen Ackles or Jared Padalecki.

Seeing Constantine in his iconic trench coat look does make me wish for a way for Misha Collins’ Castiel to turn up so he and Constantine could compare their outfits. Misha Collins didn’t shoot down the idea of joining the Arrow-verse, and one Supernatural star already made the move!

This next picture is what may shoot down a Supernatural/Legends of Tomorrow crossover to establish Supernatural as part of the Arrow-verse:

Should you go beyond this point while filming, you may appear in shot. By passing this point, you forfeit all rights for your likeness to appear within the film, in any and all media, worldwide, and in perpetuity.

Sara, Charlie, and Constantine didn’t stumble upon Sam and Dean in the midst of a Supernatural adventure, but rather on where Supernatural was filming a particular episode! Honestly, the twist that this is Supernatural filming combined with the corpse wearing a Winchester-esque ensemble kind of makes me hope that guy in the trunk turns out to be Jensen Ackles’ stunt double.

I’m going to go ahead and hope for a Jensen Ackles, Jared Padalecki, and/or Misha Collins cameo in this episode of Legends of Tomorrow. As long as it doesn’t rule out Jensen Ackles somehow playing Red Hood in the Arrow-verse, I’ll be happy!

Find out how exactly Legends of Tomorrow connects to Supernatural when “Zari Not Zari” airs on Tuesday, March 24 at 9 p.m. ET on The CW. This will be the first episode following the farewell to Brandon Routh and Courtney Ford as Ray and Nora, so hopefully it will be a good one.