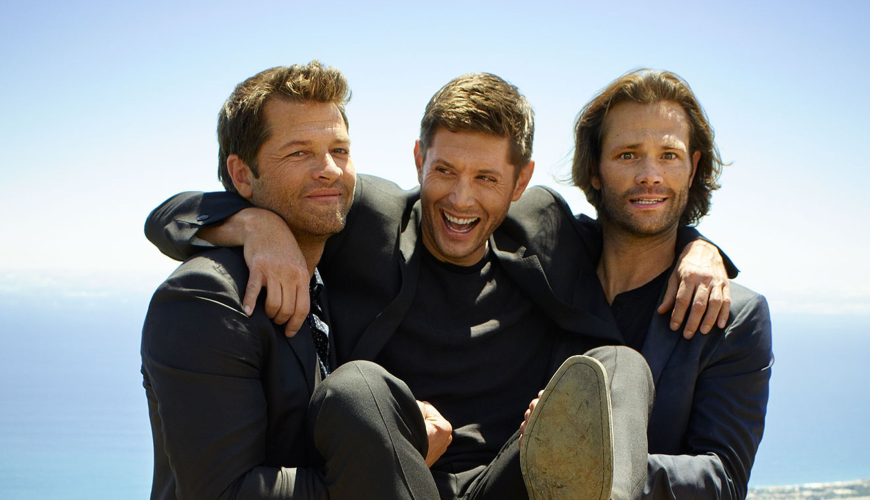 It has been a BIG day for the SPNFamily! After weeks of speculation as to whether zero, one, two or all three of the Supernatural cast’s new pilot projects would be picked up by the CW, the news came in the afternoon that the network had cancelled multiple shows. Some of those were fan favorites, and my heart goes out to those fandoms – it’s especially heartbreaking when a show is cancelled and doesn’t have a chance to do a proper wrap, leaving its characters and its fans in limbo. I’m so sorry for all those fans, and all those talented actors and crew now out of work.

The chances for the SPN pilots were clearly improved by that news, so it wasn’t shocking when all three pilots with Supernatural cast connections were picked up – ‘The Winchesters’ prequel with Jensen and Danneel Ackles and Supernatural writer alum Robbie Thompson executive producing and Jensen doing the Dean Winchester narrating, the Walker prequel ‘Walker: Independence’ aka Windy, with Jared Padalecki executive producing and Walker alum Matt Barr one of the stars; and Gotham Knights, with Misha Collins as Harvey Dent/Two-Face.

Fans joked that they’re changing the name of the network from The CW to The J2M network. But no joke, it’s a testament to the lasting popularity and power of Supernatural and the Supernatural fandom that they’ve made room for all three SPN cast pilots. The fandom may be fractured and contentious and right now arguing over which of the three everyone will be supporting (or not), but we are also passionate as hell, and currently trending all ‘our’ pilot pickups and faves.

After two failed Supernatural spinoffs, The Winchesters is the first to actually become a series. Fans have been a mix of enthusiastic and skeptical about the show portraying the beginning of the love story of John and Mary Winchester. The “mothership’s” canon had John not knowing about the supernatural at all at the time it’s set and their relationship being manipulated by celestial forces, so the prequel will have to come up with an explanation for them working together and their love story being an epic one. I’m a big fan of Robbie Thompson’s writing though, and I know how much Jensen cares about Dean, so I’m going into this hopeful – and beyond excited to hear Ackles bring Dean Winchester to life once again. I miss him. (I miss both Winchester brothers, and Supernatural itself, like a constant ache that just won’t go away). I’m hopeful that Exec Producer Danneel Ackles will bring a vintage aesthetic to the show that I can fall in love with too. Bell bottoms, paisley, the music…. Shot in New Orleans, so far, the show looks hauntingly beautiful and the cast seem wonderful. 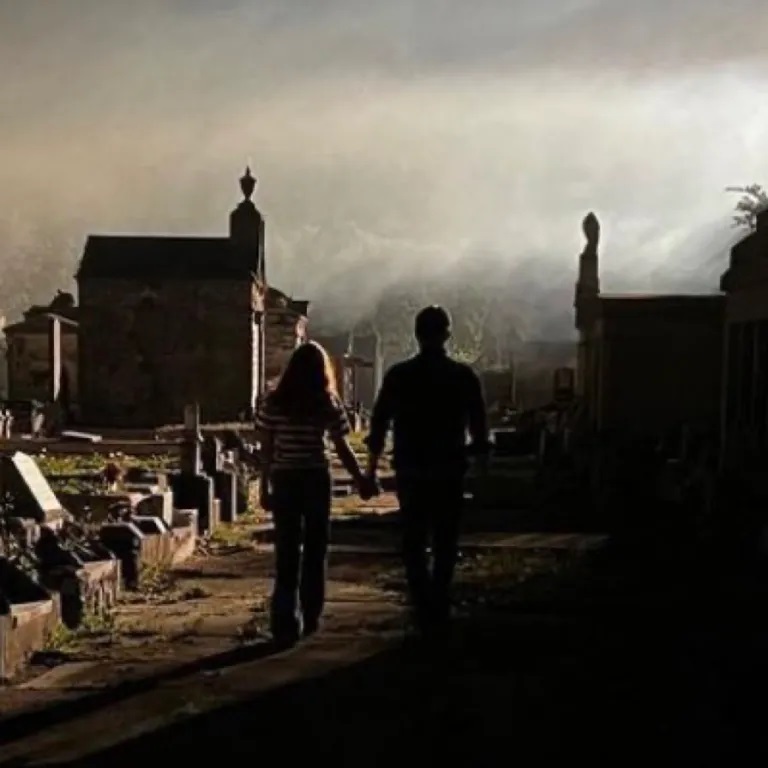 I’ve been enjoying Jared Padalecki on ‘Walker’ so I’m excited about that prequel too. Windy is set even farther back in time, in late 1800s Texas, centered on Abby Walker and her husband’s murder and her quest for revenge, and Hoyt Rawlins, the oft described “lovable rogue” type. I really enjoyed Matt Barr’s portrayal of the present day Hoyt on Walker, so I’m looking forward to the prequel. Much like The Winchesters, the show looks gorgeous, and the cast and crew are clearly beyond excited about it. Director Larry Teng took the fandom along on much of the journey, tweeting lots of photos and enthusiasm. I’m so happy for the cast, who seem lovely.

Padalecki took to twitter to let the Walker family know that the enthusiasm and congrats weren’t lost on him – and that he is as excited as we are! 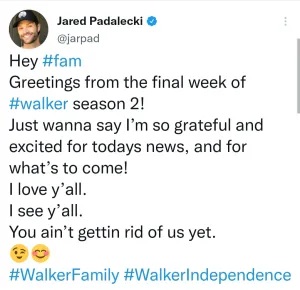 Misha Collins is playing the role of Harvey Dent (and later Two-Face) on the third SPN cast-related pilot to be picked up, Gotham Knights. Part of DC’s Batman universe, the show takes place after Bruce Wayne has been murdered and his adopted son allies with the children of Batman’s enemies when they’re framed for killing him. Misha has said that the first season sees him playing Dent, but later he’ll get the chance to play a villain as Two Face. Also he seems to have a black trenchcoat, much to the amusement of his Supernatural fans.

To make the day even more exciting, some news that I’ve been waiting for was also released – Jensen Ackles will guest star as Sheriff Beau Arlen on the season finale of Big Sky airing next Thursday. (I was sitting there watching Big Sky, trying to get a little caught up in anticipation, when that news came out). His character is described as “a confident and charming good ol’ boy from Texas who steps in as temporary Sheriff.” Charming indeed. That Deadline article came with a little ABC promo video, and let’s just say that Mr. Ackles is looking fine fine fine indeed with that long hair and a cowboy hat. Now we’ve got both Jared and Jensen as gun-toting cowboy lawmen on our screens this month. Phew.

Looking forward to next Thursday!

It’s been a great feeling to watch my timeline explode all day long with fans and other Supernatural cast reacting to all the good news. Misha Collins tweeted his excitement to his former co-stars, who will perhaps all be at the Upfronts next week (if Ackles isn’t committed to The Boys publicity and Padalecki isn’t finishing up Walker). 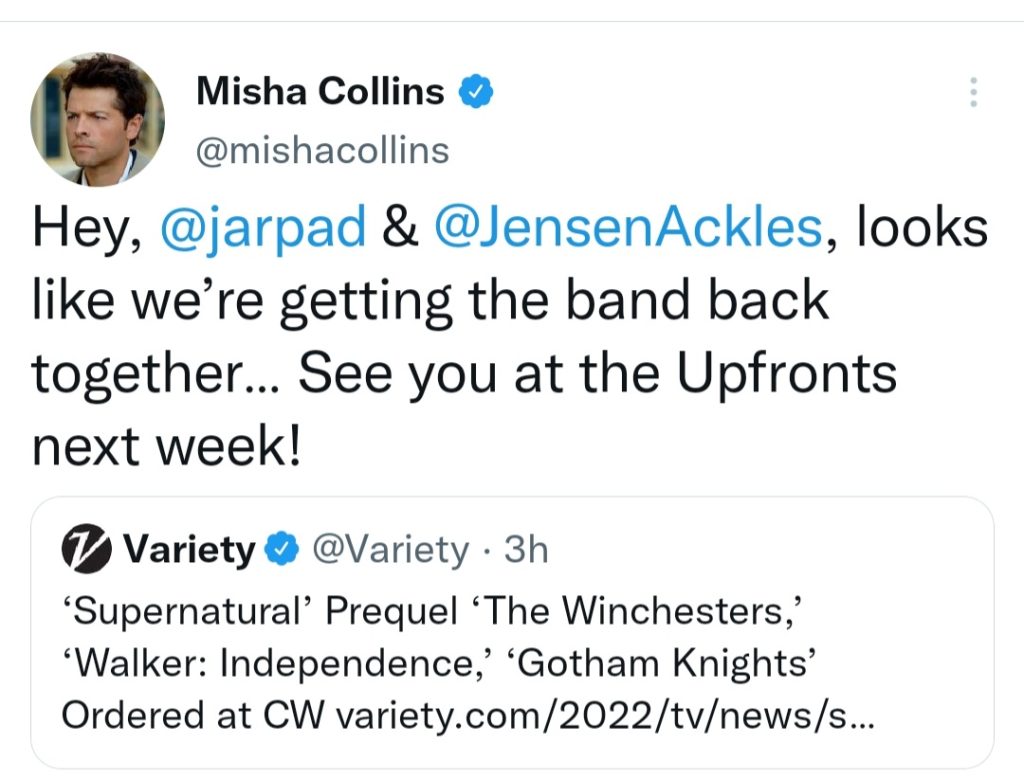 Looks like Jared is up for it – as long as he can play the cowbell! Seriously though, I love how this cast will always support each other and genuinely look forward to enjoying each other’s company.

Eric Kripke seemed almost as emotional as me about the incredible legacy the little show he created has left – and all the wonderful new things its cast has gone on to create. What a wonderful legacy for Mr. Kripke as well, as he prepares for the launch of Season 3 of The Boys (also starring Ackles, who luckily likes to keep busy).

Nothing is ever going to replace the OG Supernatural for me, but I feel incredibly lucky to have all these other shows to look forward to – and so proud of the actors who made Supernatural the phenomenon that it is, and everything that they’re out there creating now. Whether you’re planning to watch one show or two or all three, there’s alot to look forward to coming up!

My name is Damyan Ivanov and i was born in 1998 in Varna, Bulgaria. Graduated high school in 2016 and since then i'm working on wordpress news websites.
Jared Padalecki, Jensen Ackles, Misha Collins, News, Supernatural, Supernatural cast, TV Series