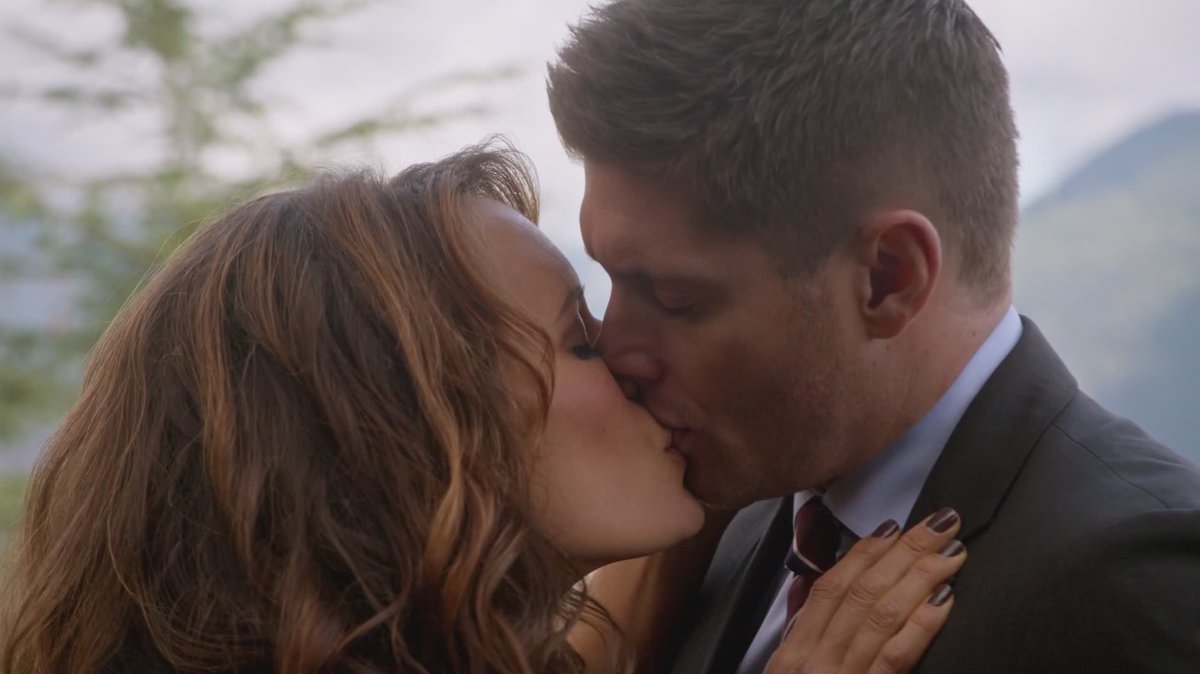 The end of Supernatural is near and the final episodes will have to wrap up the Winchester saga. Emily Swallow came back to reprise her role as Amara in the last Season for the first time since the end of Season 11, and Amara’s reunion with Dean and Sam in the latest episode might give them the edge they need to defeat God. That said, Sam wasn’t around for a dramatic scene between God’s twin sister and Dean, but any sparks that flew between them weren’t romantic, and Emily Swallow spoke to CinemaBlend about their dynamic.

The Winchesters have had some pretty awful luck in the relationship department over the years, to the point that it’s hard not to be nervous about Eileen possibly dying for a second time! Dean and Amara never had a traditional romance despite a big kiss, but there has been a connection between them ever since The Darkness made her debut. Emily Swallow explained why she’s glad their connection didn’t take a romantic turn in the final season, saying:

“One other thing that I did read that I had to laugh at is I think fans are relieved, there’s a lot of people that said, ‘I’m so glad that they didn’t delve into like the romantic side of Amara and Dean again.’ And I’m glad for that too. The fans weren’t particularly into that. And I think it’s just a much more interesting relationship between them if it’s not [romantic]. You know, I think that they thought it might be romantic at one point. But that was not the answer. I think that there’s something that’s still so mysterious to both of them about why they feel this connection. And I like that it didn’t take an easy road down like some, you know, making out all over the place.”

Dean may have wanted some time alone with Amara, but he didn’t leave Sam behind in the Impala because he wanted to make any kind of romantic overture toward Amara. Their connection has always been complex, and Dean was more preoccupied with getting an answer for why Amara brought back Mary than anything else. Since Dean is currently planning on setting Amara up to die along with God to keep the universe in balance, he might not have many other chances to have a conversation with her.

Amara did agree to consider helping the Winchesters battle her brother after Dean promised not to hurt her. Dean’s pants didn’t immediately catch on fire from his massive lie, so the Dean/Amara dynamic might only get more complicated before the end, especially if he goes through with betraying her and/or she figures it out. When asked if her scene with Jensen Ackles in the latest episode was intense to film, Emily Swallow revealed:

“It was, in such a good way. The most enjoyable scenes for me in season 11 to actually shoot were those scenes with Jensen because all the rest of the time, you know, I’m sucking people’s souls and smiting people and standing in front of a giant fan that’s blowing my hair everywhere. And, you know, it was a lot of like, big Hellfire and damnation stuff. And then I got to have these tiny little intimate scenes with him that were very human and very connected and very real. And I think that, you know, I, like everyone else have wondered for a while now why she thought it was a good idea to bring Mary back. It was just such a well-written scene. And Jensen is always totally there in the moment and connected and I loved getting to give voice to the question that a lot of us have had about why Mary came back and why it went the way it did.”

In the scene, Amara explained that she brought Mary back at the end of Season 11 to try and release Dean from all the dreams about a perfect family that held him back, but his brief time with his mom before her heartbreaking death (again) only made him angrier with Amara. Is his anger combined with his drive to save everything by killing God enough to sever his connection with her and set her up to die?

Or will Dean be unable to ruthlessly go through with setting her up? Sam clearly wasn’t happy at the prospect, and he doesn’t have nearly as deep of a connection to Amara as Dean. Castiel might be against anything to do with Amara now that he knows Jack plans to die to kill both Amara and God, while Jack seems determined to sacrifice himself to try and get forgiveness.

Emily Swallow didn’t drop details or spoil what happens for Amara, but she did tease what’s in store in her upcoming appearances:

“It’s not gonna get any simpler. It’s gonna get more complicated. That’s all I will say.”

Considering everything that still needs to be resolved and the fact that only five episodes are left, it’s no surprise that more complications are on the way! On top of Dean’s lie to Amara and the battle against God, Castiel is now on a mission to find a way to spare Jack’s life, and the deal with The Empty still has to be dealt with. In fact, could finding a way to save Jack be what makes Cas happy enough for The Empty to come for him? And how would the rest of Team Free Will 2.0 handle it?

Find out when the final new episodes of Supernatural air on Thursdays at 8 p.m. ET on The CW. The next new episode will be called “Drag Me Away (From You)” and see Sam and Dean asked to investigate the murder of a childhood friend, which calls them back to a motel from their past and force them to face a case they thought they solved long ago. See what happens on October 22 at 8 p.m. ET.