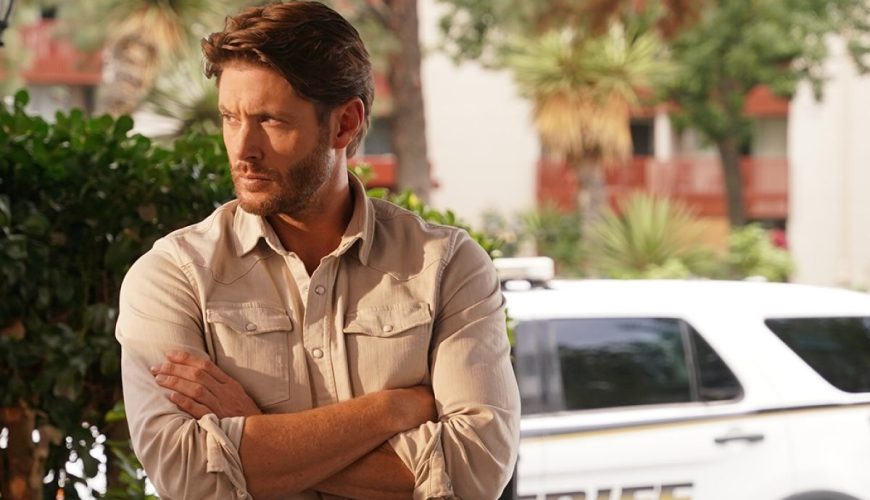 Jensen Ackles has been busy since Supernatural ended in 2020. Aside from making a very memorable entrance on The Boys (socks will never be the same) and starring in the controversial/tragic film Rust with Alec Baldwin, he also developed and narrates the upcoming Supernatural spinoff The Winchesters. (Here’s what you need to know about that show.)

For now though, fans can catch him on the third season debut of CTV’s Big Sky: Deadly Trails. The series airs Wednesdays at 10pm ET/PT on CTV and co-stars Canadians Katheryn Winnick (Vikings) and Kylie Bunbury (Pitch) as Montana law enforcers Jenny Hoyt and Cassie Dewell, respectively. (Watch episodes now on CTV.ca and the CTV app.)

In the show’s first season we learned that these writers aren’t playing around, and that anyone — even Ryan Phillipe — isn’t safe from an unforeseen plot twist. So no one should be surprised that Ackles, who first debuted as new sheriff Beau Arlen in the Season 2 finale, is here to shake things up.

A potential love triangle
Ackles is a full-time player in the third season, which means he’ll have lots of time to tango with Jenny and Cassie. Last season he seemed to have chemistry with both leading ladies; this season that thread continues. After all, Ackles has chemistry with everyone, and the writers don’t want to box that in just yet.

“When my initial conversation with [showrunner] Elwood Reid took place, he mentioned shaking some stuff up for Season 3,” Ackles said during a Television Critics Association panel. “And I thought, ‘I can shake.’ I’ve got plenty of videos, don’t worry,” he continued when his co-stars ribbed him.

In an interview with TVLine, Reid drove home that point. “I’ll leave it for interpretation,” he said. “[Beau is] a very fun, interesting guy — and both of these women find him fun and interesting. As the season progresses, there might be some sparks on one of those sides.”

He plays the role you probably expect him to play
If it seems like Ackles is getting the same kinds of roles lately, he’s okay with that. At the outset, it seems as though Beau is a no-nonsense but fair and flexible police officer. Of course all the ladies in town notice him, but it’s clear he has other things on his mind.

“I feel like I’m getting a little typecast, just being a guy from Texas who wears boots, because I’m literally wearing boots right now and I’m from Texas and I live there,” Ackles continued during the TCA presentation.

“So I feel like it was a natural fit. It was an opportunity to come and work with some really Grade A actors and work with an awesome story,” he said. Ackles added that once he found out Reba McEntire had joined the cast as new villain and glamping experience owner Sunny Barnes, he was all in.

“It just came down to the fact that Reba was coming in too,” Ackles continued. “I was in for a penny, in for a pound.”

There’s more to Beau than meets the eye
In the third season premiere, we learn more about Beau’s daughter while yearning to know more about his ex-wife. That mystery seems as though it will play out within the larger, season-long mystery that involves a gruesome killer.

Ackles revealed that was part of what lured him to the role. The other part was a thread Beau shares with many of the actor’s other characters from over the years: a strong sense of justice.

“At the end of the day, you try to find what is really at the heart of these characters,” he says. “You try to bring that heart out. These characters, they all think they’re right. Whether they’re wrong or not, they’re doing what they feel is right in their heart,” he continued.

“If you take that approach with any character, then it has a little bit more complexity than just playing a bad guy. It’s probably something I’m drawn to, which, by default, makes me enjoy playing them and succeed in doing so. Then that continues to parlay into other jobs.”

My name is Damyan Ivanov and i was born in 1998 in Varna, Bulgaria. Graduated high school in 2016 and since then i'm working on wordpress news websites.
big sky, Big Sky Season 3, Jensen Ackles, News, TV Series