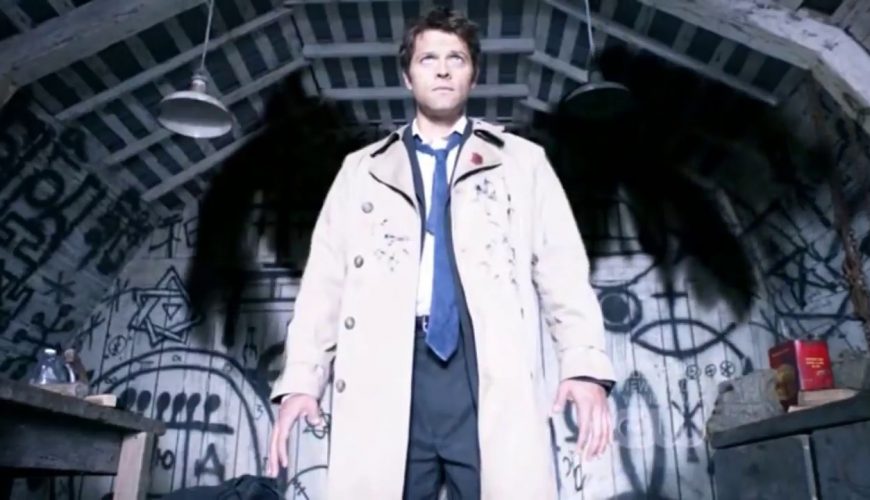 So September is definitely a big month in the Supernatural universe. Earlier this month, we had Jensen Ackles, Jared Padalecki, and series creator Eric Kripke (The Boys) honoring the long-running series’ final day of filming (September 10, 2020) and the first day the series aired (September 13, 2005).

This time around, Misha Collins is checking it to commemorate the 13th anniversary of the introduction of the angel Castiel in the game-changing Season 4 opener “Lazarus Rising” that also found Dean (Ackles) having mysteriously returned from Hell (and the two of them going on to become an endless inspiration for years of fanfic).

“13 years ago today, Cas found a vessel and met his human family for the first time. Happy Birthday, Castiel. I hope you’re still happy,” Collins wrote in his Instagram post from earlier today, along with an image from his debut:

Here’s a look at Padalecki’s post honoring the special day earlier this month, followed by a fun flashback story from the two that’s definitely worth checking-in out:

With development on the Supernatural prequel spinoff series The Winchesters clearly still in the very early development stages, SPN fans can take comfort in knowing that they’re getting their Padalecki and Ackles fixes in two distinctly different ways. For Padalecki, it’s The CW’s Walker (set to return this October for a second season); for Ackles, it’s his highly-anticipated turn as Soldier Boy for The Boys that had folks stalking social media just to get a first look at his costume. And yet, a little rolling back of the clock every now and then isn’t always a bad thing- as Ackles and Padalecki found themselves doing this week.

It all began when Samantha Highfill shared via Twitter the cover to the 2016 issue of EW that featured the boys on the cover (the first) for a feature story (Highfill’s first). From there, Ackles and Padalecki share some “background intel” on just how difficult it can be posing on the hood of a car. Teaser? The story involves wax and boots (get your minds out of the gutters, perverts). Here’s a look at how the Twitter nostalgia played out, beginning with Highfill sharing the EW cover:

I remember that shoot. “Baby” had a fresh coat of wax on her…and @jarpad and I did everything we could to keep from sliding off the hood. Not sure how we got this photo. Ah, good times. https://t.co/1MbKwJBOpP

Talk about truth bombs!!! My most vivid memory of that shoot was us laughing as we tried hard to stay in place on the hood (without denying it, or scuffing it with the heels of our fancy photo shoot boots), and failing miserably. It was slicker than a slip n slide. 🤦‍♂️ https://t.co/8MwCdICR6C

And just in case you had any doubt? Highfill showed up with receipts to smooth over any questions marks:

Talk about truth bombs!!! My most vivid memory of that shoot was us laughing as we tried hard to stay in place on the hood (without denying it, or scuffing it with the heels of our fancy photo shoot boots), and failing miserably. It was slicker than a slip n slide. 🤦‍♂️ https://t.co/8MwCdICR6C