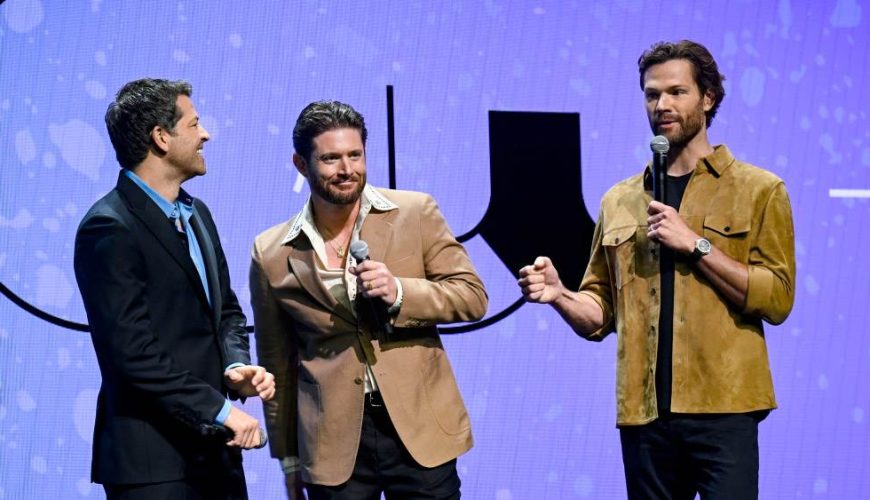 The lucky people in attendance at the 2022 CW Upfronts presentation were treated to a special surprise!

Supernatural stars Jensen Ackles, Jared Padalecki, and Misha Collins reunited on stage at the event on Thursday (May 19) in New York City.

All three of the guys have projects either currently airing on the network or on the way. Jensen is executive producing the new Supernatural origin series The Winchesters with wife Danneel Ackles, Jared is starring in Walker and executive producing the prequel series Walker: Independence, and Misha is starring in the upcoming series Gotham Knights.

Even though the guys were all there to promote individual projects, they reunited on stage and pitched some ideas to network boss Mark Pedowitz.

Variety reports that the actors walked on stage when Mark said, “From major cultural events to hit specials, it is always a good time when the CW goes off script…”

Jared chimed in, “We were just, not spying, just kind of existing nearby. And we heard you talking about the movies and specials, and since all three of us are back on the CW this year, we just wanted to pitch some ideas to you.” Misha added, “Just back-of-the-napkin kind of stuff.”

One idea from Misha was a special called A Very Castiel Christmas for his Supernatural character Castiel.

My name is Damyan Ivanov and i was born in 1998 in Varna, Bulgaria. Graduated high school in 2016 and since then i'm working on wordpress news websites.
Jared Padalecki, Jensen Ackles, Misha Collins, News, Supernatural, TV Series