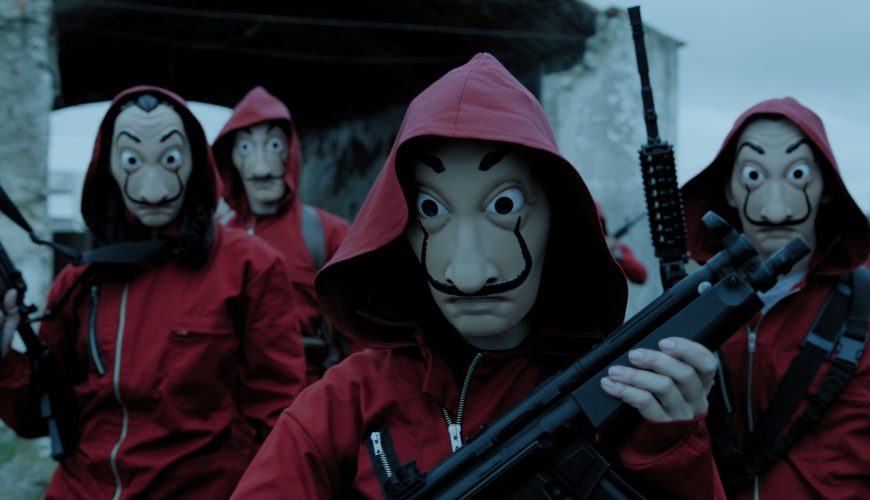 As one of the most popular Netflix TV series, Money Heist took the entertainment world by storm. A well-received addition to the action and crime genres, Money Heist quickly rose to popularity and became a fan favorite.

A one-of-a-kind heist story, Money Heist is a Spanish drama set in Madrid. Money Heist follows the thrilling heists orchestrated by the Professor who has spent years detailing his plan. A fast-paced series, Money Heist creates an exciting atmosphere brimming with danger, friendship, and love. There were some episodes that stood out the most.

Using a bug planted in the police tent, the Professor finds out that a crucial piece of damning evidence was not destroyed. Emotions run high. Denver grows closer to the bank teller that he shot as he treats her wounds in a secret location within the bank.

With the Professor’s tactics being used against him, his dilemma grows further. He is forced to make some daring decisions to keep his plan functional. An amalgamation of various emotions, Lo Que Se Habla En La Cama is filled with funny, tense, and mysterious moments that make the viewers ask for more.

A disastrous communication gap between the robbers and the Professor results in a mutiny. Further fuelling the fire, a falling out between Tokyo and Berlin sets the scene for a heartbreaking tragedy. One of the robbers ends up in police custody.

Negotiations between the Professor and Tamayo that are crucial for the country’s economy lead to a final battle of wits. With multiple lives at stake, Una Tradición Familiar is an action-packed finale filled with deception and adrenaline rush.

6
Cuestion De Eficacia Sees The Hostages Come Together (8.7)
The third episode of the second part, Cuestión De Eficacia, is a major revelation in Money Heist. Directed by Javier Quintas, Cuestión De Eficacia displays the Professor’s wit and the robbers’ collective efforts to call out the police’s hoax and suppress a hostage rebellion.

The Professor is misleading Raquel Morillo, an inspector of the National Police Corps, by pretending to be Salva. The robbers put an end to the hostages’ plans to escape. The robbers try to win the public’s favor by employing various tactics.

5
¿Que Hemos Hecho? Is The Epitome Of Love And War (8.7)
The fourth episode of the second part, ¿Qué Hemos Hecho?, follows events inside and outside the mint. Directed by Jesus Colmenar and Alex Rodrigo, ¿Qué Hemos Hecho? shows the intense interrogation of the Professor when Rachel discovers Salva’s true identity.

The robbers punish Arturo Roman, the former Director of the Royal Mint of Spain, for incessantly trying to escape and enticing the other hostages to do the same. The tension in the mint rises as some secrets are revealed. Tokyo is saved by the Professor.

4
A Contrarreloj Puts An Officer On The Other Side Of The Law (8.7)
A Contrarreloj sees the downfall of Raquel’s career as an officer of the law. Directed by Alejandro Bazzano, A Contrarreloj deals with how Raquel copes after being accused of colluding with the Professor and the robbers. Raquel, emotionally unwilling to arrest the Professor, lets him go unharmed.

Suspended, Raquel visits Angel Rubio, her second-in-command. Rubio is in a coma in the hospital. She steals Angel’s gun and badge, and sets out on an investigation of her own. Meanwhile, Angel wakes up.

The robbers try to bring the situation inside the mint under control as a few hostages manage to escape due to one of the robbers’ carelessness. The robbers wonder what the hostages will do next as they propose two options to them.

2
La Deriva Reveals Sierra’s Cunning Plan (9.4)
The eighth episode of the third part, La Deriva, sees how cruel and conniving Alicia Sierra, an inspector of the National Police Corps, can be. Directed by Jesus Colmenar, La Deriva is easily one of the most heartbreaking episodes of Money Heist.

As Tokyo tries to deal with her grief by drowning herself in alcohol, Sierra unleashes an unconventional weapon from her arsenal. Playing to Nairobi’s emotional side and digging up her past, Sierra manages to take her out. A manhunt for the Professor begins.

1
Bella Ciao Marks The End Of The First Heist (9.4)
Bella Ciao is the second part’s finale and one of the most emotional episodes of Money Heist. Directed by Jesus Colmenar and Alex Rodrigo, Bella Ciao portrays the police’s failure to apprehend the robbers.

Arrested and brought in for questioning, Raquel refuses to give away the whereabouts of the Professor. Threatened with the loss of her daughter’s custody, she caves in and reveals all. Lives are lost and trust is broken as Bella Ciao progresses.

My name is Damyan Ivanov and i was born in 1998 in Varna, Bulgaria. Graduated high school in 2016 and since then i'm working on wordpress news websites.
IMDB, La casa de papel, Money Heist, TV Series