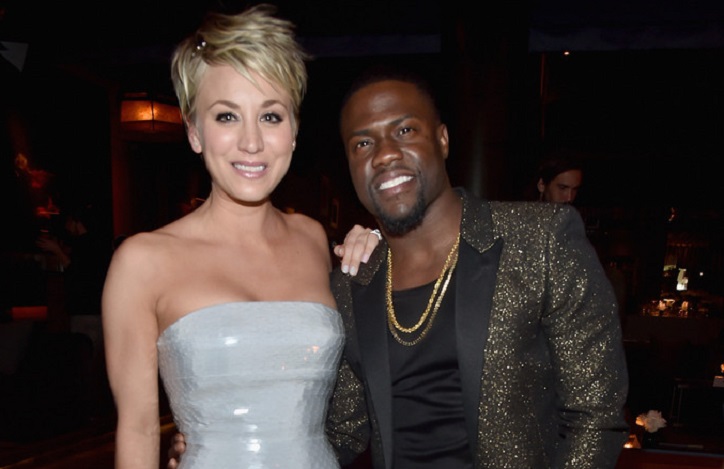 After ending her 12 season run on The Big Bang Theory last May, Kaley Cuoco has been filling the sitcom shaped void in her life rather creatively. Not only has she become the new voice of DC Universe’s animated Harley Quinn series, but she’s now picked up a new film project that will provide her with a chance to reunite with co-star Kevin Hart. Get ready folks, as Ms. Cuoco is about to meet that Man From Toronto we’ve been hearing a lot about lately.

Previously seen together in the 2015 romantic comedy The Wedding Ringer, Variety broke the news that Kaley Cuoco and Kevin Hart will actually run into each other yet again in the action-comedy that also stars Woody Harrelson. As Hart and Harrelson are a random everyday Joe and an infamous hitman, respectively, their characters are confused thanks to a particularly fateful AirBnB reservation.

No details have been given in reference to Kaley Cuoco’s Man From Toronto character, but her casting is rather interesting considering that this movie was set to originally set to be a reunion of a different type altogether. Previously, Hart and his Fast & Furious Presents: Hobbs & Shaw co-star Jason Statham were set to collide yet again; but Statham bolted from the project just as production was about to begin. This lead to Harrelson getting the role in a pretty quick example of turnaround.

This reteaming of Kaley Cuoco and Kevin Hart might mean the two comedic talents will get more screen time together, as the bulk of The Wedding Ringer’s path of events saw Hart teamed mostly with Josh Gad, Cuoco’s on-screen husband. Creating a triangle of heavy hitting talent in Man From Toronto, Kaley Cuoco’s casting is one of the silver linings to the rather rocky path the film has taken in recent weeks.

The film was supposed start shooting in Toronto in the near future, as the project was given a November 20th release date initially. Its tight timeframe the catalyst for Woody Harrelson’s quick casting, things seemed to be going smoothly to stay the originally scheduled track. But as you could predict, the Patrick Hughes directed picture was one of many films that had its shooting schedule paused due to the COVID-19 pandemic.

As these delays could be seen as a bad sign, Man From Toronto has gained some extra prominence with Kaley Cuoco’s addition to the cast. We’ll see soon enough if this newly formed comedy trio will make a killing at the box office as Man From Toronto has been for an September 17, 2021 debut, with an unknown start date for its production.