Kaley Cuoco was left “super scared” after suffering a head injury ahead of filming The Flight Attendant.

The Big Bang Theory actress accidentally injured herself in the shower just before returning to filming the new HBO Max thriller based on the popular book by Chris Bohjalian. 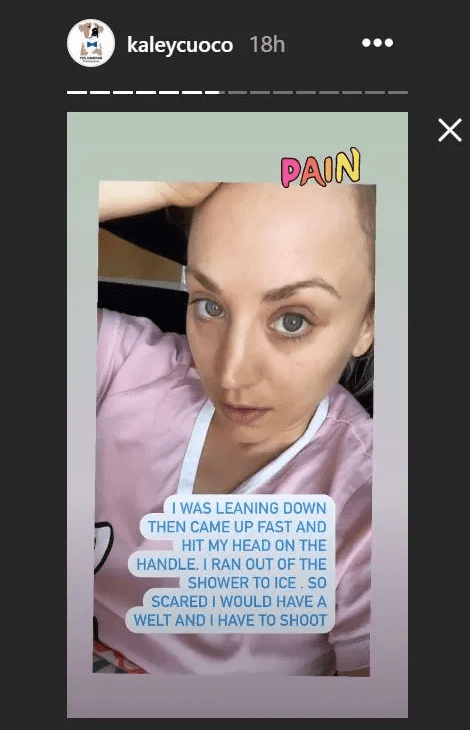 Kaley, 34, revealed she was left shaken up and “super scared” after she hurt her head in the shower.

After a successful week of filming The Flight Attendant, after production was pushed back due to the coronavirus pandemic, the actress was worried she might have to delay her scenes because of the bruise that formed.

Posting to her 6.1 million Instagram followers, she said on her stories: “I hit my head in the shower, I got super scared.

“I was walking down and I lifted up and hit my head on the handle of the door. I iced it because I was so scared I was going to get a huge welt for work tomorrow.”

She added: “Luckily I’m not supposed to look to good in the next scenes so that helps that.”

The Big Bang Theory star went on to praise her The Flight Attendant family, telling her fans the team had enjoyed a “healthy week”.

She enthused: “So proud of the crew.”

Kaley is currently executive producing and starring in The Flight Attendant, about attendant Cassandra Bowden [Cuoco] who wakes in her hotel room hungover from the night before.

All normal so far, sounds like a standard Sunday morning. Except Cassandra is in Dubai and there’s a dead body lying next to her.

Worried about calling the police, she decides to continue as if nothing has happened and returns to New York, where she is met by FBI agents.

Unable to piece together her evening, Cassandra worries if she is the killer.