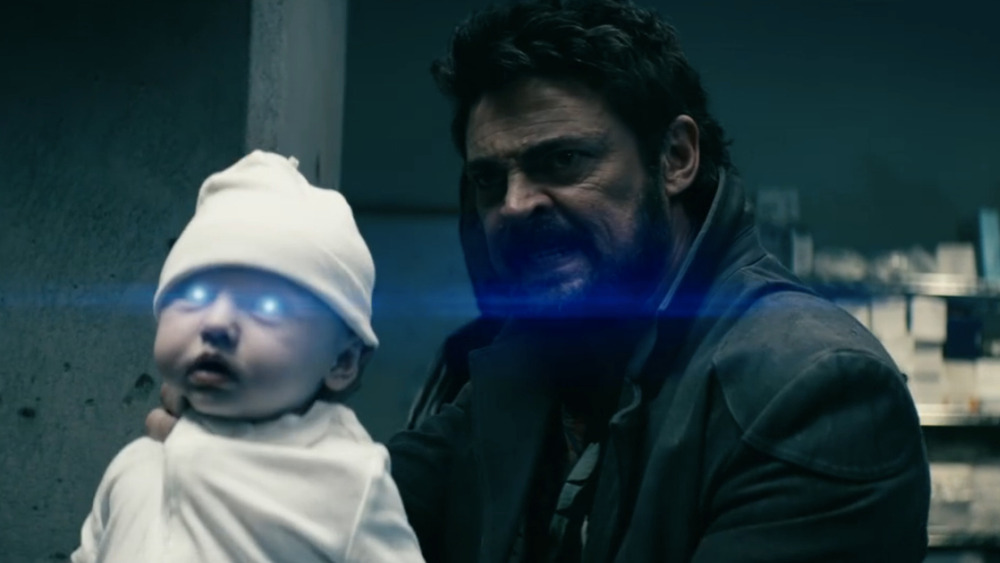 One would think it should take a lot for fans of The Boys to feel like a certain scene went too far. After all, Amazon Studios’ sizzling superhero send-up is a series seemingly built on going too far. When a Compound-V-addicted A-Train (Jessie Usher) accidentally kills Robin (Jess Salgueiro) while running his drug errands, he unknowingly sets in motion a seemingly endless parade of going too far. After Hughie (Jack Quaid) plants the bug at Vought-International, Translucent (Alex Hassell) goes too far in his pursuit and would have killed him had Billy Butcher (Karl Urban) not stepped in. Hughie, in turn, goes too far by killing Translucent in the most spectacular of blood-soaked scenes — and, for all his flaws, you had to feel bad for Frenchie (Tomer Kapon) having to help clean up that particular abattoir. Mind you, this was just two episodes in; with apologies to the legacy of Captain John Paul Jones, The Boys has not yet begun to go too far.

But we were curious to know which other scenes from The Boys fans felt were a bit much and which made fans’ stomachs churn the most, so we did what we always do when we’re curious: we launched a survey! Looper asked 528 fans across the United States which scene from The Boys went too far and one in three had the very same one in mind.

Robin’s death got the fewest votes

Before we get to the scene that the most respondents felt went too far, we need some help understanding how the scene that got the fewest votes ended up in last place. The scene in question is the one we just mentioned: Robin’s death, the inciting incident for the entire series that we felt set the WTF bar pretty high. Rather quizzically, however, only 8.7% of respondents agreed that Robin’s death — the scene without which there is no show — went too far. Seeing Hughie and Robin share a sweet embrace and kiss before the former gets splashed with what used to be his girlfriend — but is now a slow-motion, mid-air puddle of blood, entrails, a spine, and what looks like a mandible — after her body explodes, courtesy of a careless, drug-addicted Supe didn’t push the limits for you? Not even when the camera panned down to Hughie holding Robin’s disembodied hands in his own and he meekly whimpers her name? Jeez. The only explanation we can come up with is that fans felt she deserved such a terrible fate for besmirching the name of Billy Joel, which is a bit harsh, but understandable. 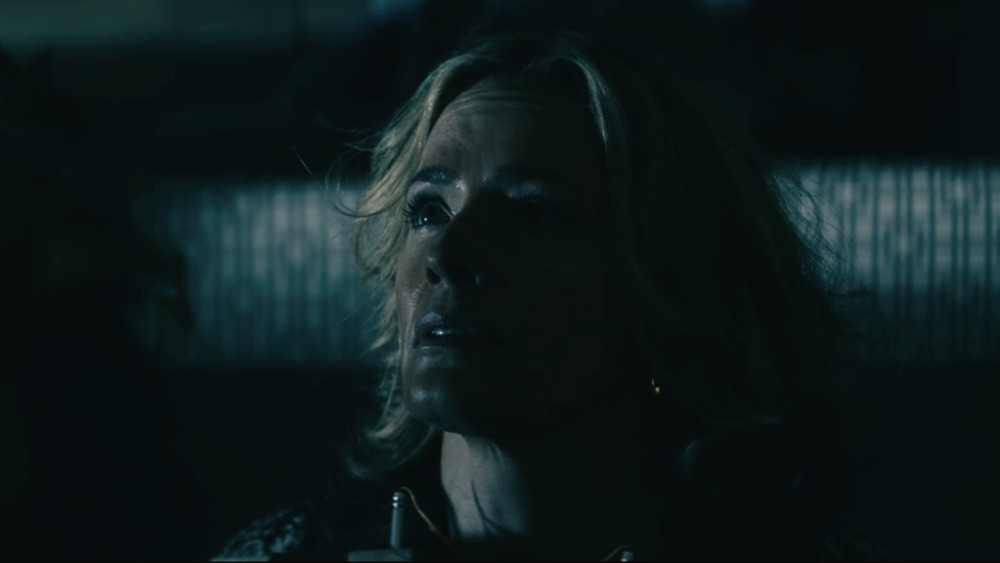 Okay, full disclosure, it wasn’t just the fact that Robin’s death received the fewest votes bothering us; the issues is compounded by the fact that, somehow, Madelyn Stillwell’s (Elisabeth Shue) death received more. Look, we love Elisabeth Shue too, but her character was a vile, manipulative corporate goon who used her power at Vought and control over The Seven to make the world worse, not better. And yet 11.4% of respondents felt that scene went too far, a dozen or so more than those who felt the same about Robin’s death. The truth surely is stranger than fiction. Was it the fact that Homelander (Antony Starr) burnt her eyes out with his eye lasers after she was finally candid and admitted she feared him? Was it the fact that Billy Butcher recklessly detonated the explosive vest he’d put on her, endangering the life of her child? Well, as we learned in the season 2 premiere, Teddy was found safe 17 miles away from the scene, so we still don’t get it.

Of course, we got to see Stillwell again in season 2 as well. Well, a version of her, at least; one that had us all sorts of confused until Doppelganger (Dan Darin-Zanco) accidentally broke form, much to Homelander’s dismay.

Even more people thought the whale scene went too far 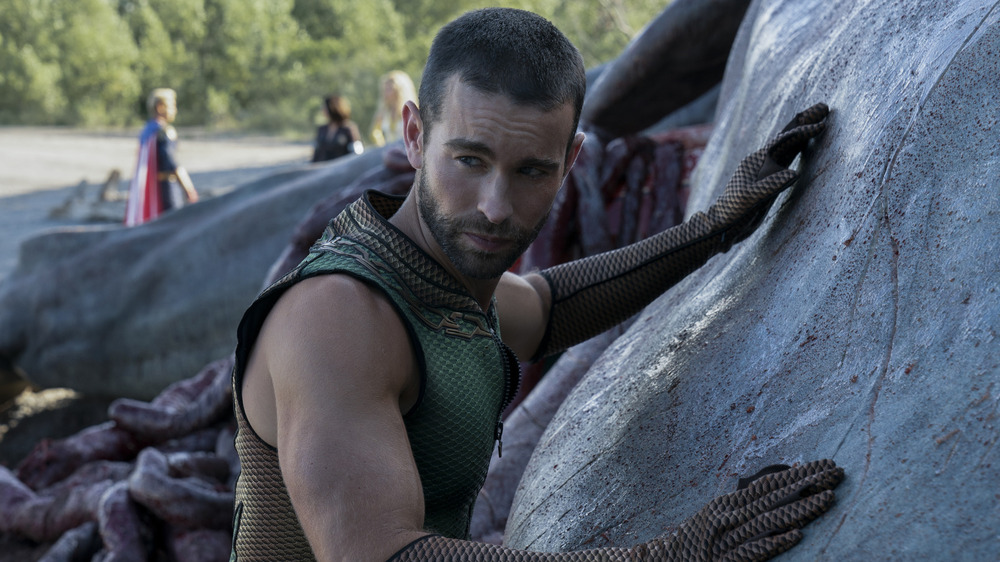 Apparently a lot of fans of The Boys are also big fans of aquatic mammals, because 12.1% of respondents chose the whale scene from season 2 as the scene they felt went too far. Admittedly, it’s pretty messed up seeing Billy Butcher lock eyes with The Deep (Chace Crawford), with one behind the wheel of a boat and the other atop a sperm whale, because we know which one is going to blink first every time. Sure enough, the leader of The Boys won that particular game of chicken, which somehow managed to be worse than seeing The Deep’s dolphin friend — newly rescued from Oceanland — torpedoing through the windshield of his getaway vehicle and being crushed by a semi truck in season 1.

Does showrunner Eric Kripke have some kind of deep disdain for cetaceans? Whether he does or not, we know fans weren’t the only ones in disbelief at the scene; according to an interview with The A.V. Club, so were some of Kripke’s co-workers. “I think that at least the line producers thought we were bluffing about creating this thing,” Kripke said. “They were like, ‘We’re not really doing this, right? It’s just our first draft?’ And I had to say, ‘Oh, no, we’re doing this.'” 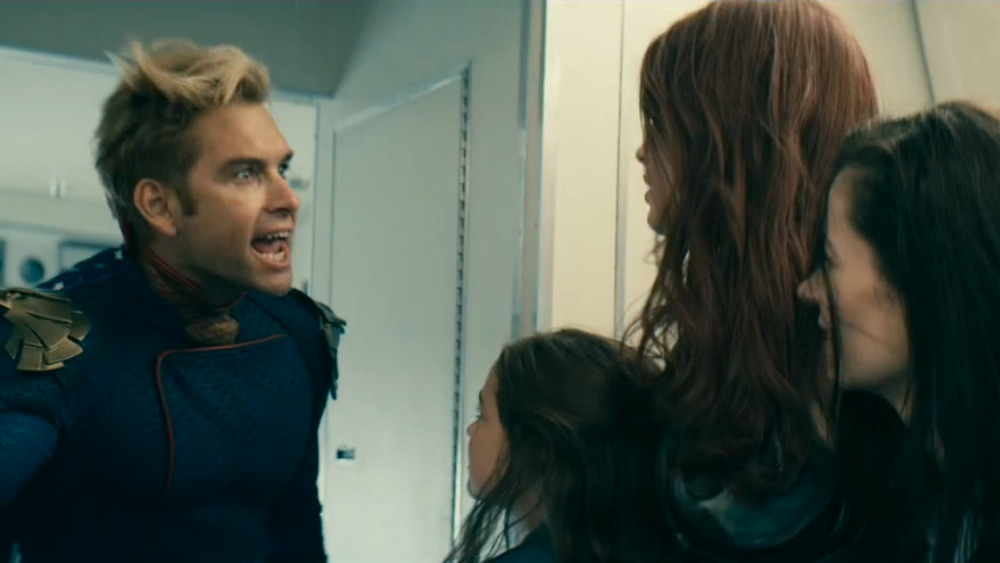 In third place, with 12.3%, was the botched air rescue from season 1’s fourth episode, and we’ve got to say, letting an entire plane full of people die in terror is pretty wack. Of course, it wasn’t just the fact that Homelander — and, against her will, Maeve (Dominique McElligott) — was going to let the plane crash with no survivors in order to prevent any living witnesses from telling the truth about the event; it was that the smug jerk also threatened to laser the terrified passengers when he felt they got too close. The issue is further compounded by the fact that the heroes — term used loosely — were the ones responsible for the fact that the plane was crashing to begin with. After all, it was a relatively standard hijacking and hostage rescue until Homelander recklessly used those very same eye lasers to kill the terrorist who murdered the pilot, destroying the plane’s control panel in the process. But that’s what the show is all about: the hubris and carelessness of those with special powers and how their actions destroy lives even with collateral damage.

And, to add insult to injury, Homelander has the gall to actually capitalize on the crash and use it as a means of pushing Vought’s agenda of putting Supes in the military. That’s cold.

The Boys fans thought the Laser Baby scene was diabolical

The second-most popular response was “Other,” with nearly 20% of the vote, which pretty much cements our idea that the show goes too far on a regular basis, given that fans thought there were more egregious examples than the ones we listed. But the big winner, with more than 35% of the vote from our 528 respondents, is the scene from The Boys season 1 with the weaponized babies. That particular untoward moment went down in the fifth episode, entitled “Good for the Soul” — spoiler alert: it wasn’t.

When Hughie blackmails Ezekiel (Shaun Benson) at the Believe Expo with the false story of him “playing [his] butt like jazz” after pressuring Starlight (Erin Moriarty) to get him a Diamond Club pass — all of which was also totally messed up in its own right, Butcher and MM (Laz Alonso) head to the newborn intensive care unit at Mercer Hospital and uncover the fact that Vought is creating Supes by injecting children with Compound V. While that’s utterly mortifying, Butcher puts the cherry on top of the WTF sundae by grabbing one of the kids — affectionately referred to as Laser Baby on The Boys’ Fandom wiki — and uses its eponymous ability to shred the guards that have them pinned down. It was, per Butcher’s second-favorite word, diabolical.