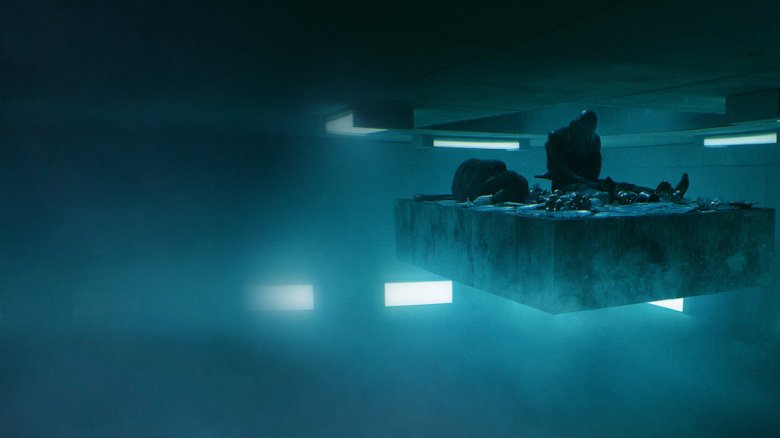 Galder Gaztelu-Urrutia makes his feature directorial debut with an astoundingly creative and well crafted film. The Platform is a must-see feat of production design, score, performance, and high-concept execution that will likely leave your stomach extremely unsettled – and in this movie’s case, that’s a compliment.

The movie stars Ivan Massagué as Goreng, a man who voluntarily agrees to serve six months in The Hole in exchange for an accredited diploma. The facility is a prison of sorts that’s structured vertically. Two inmates call each floor home for exactly 30 days. At the end of that period of time, gas fills the structure, knocks them all out and when they wake up, they’re on a new floor. Why does the floor they’re on matter? Because they’re only fed once a day for a matter of minutes via the platform. It begins on floor 0 where it’s loaded up with a dream-like assortment of drinks, salad, chicken, cakes and more and then, the platform descends floor by floor. Floor 1 gets the food of their choice, then their leftovers move to floor 2, floor 3, and so on. While that might not sound all that bad for the folks higher up, imagine calling floor 100 home – or even floor 48 for that matter. When the floors above you are stuffing their faces and even stepping on the table to get what they want, there’s a good chance you’ll be left with their unappetizing remnants – if you’re left with any food at all.

It’s an ingenious premise on so many levels – no pun intended. First off, strictly as far as entertainment value goes, the scenario is downright riveting. Whether it’s verbal sparring, a physical altercation or just the dread of wondering where Goreng will wake up next, The Platform has you on edge from start to finish; on edge for Goreng’s sake and also for yourself because writers David Desola and Pedro Rivero craft the story in a way that encourages maximum participation. What would you do if you woke up on floor 100? How would you negotiate with your floor-mate? What would you do if you were lucky enough to wake up on floor 5? Would you stuff your face every day or consider the needs of the folks below you? The questions can go on and on, and that’s where it becomes abundantly clear that, yes, The Platform is just a movie but it’s also one we could and should learn from.

We live in a world where most of the wealth is in the hands of a select few – just like the food available in The Platform. If you had access to all of that food, would you limit yourself to what you need or eat until you couldn’t possibly eat anymore? I imagine one would like to think they’d limit themselves to the necessities, but what if you also had to manage the fear of losing that wealth in the near future by being moved to a food-less floor? Desola and Rivero’s script digs into all of that and then some, well representing how simple it could be to ensure the wellbeing of the many, but while keeping many all-too-realistic human failings in play, too.

And all of it is embodied in our lead Goreng, and Massagué delivers a performance that manages to capture every single ounce of the devastation of his predicament to the fullest. There are moments when Goreng isn’t thrilled but still has faith in humanity and hope he can pull through, but he also struggles through the terror of body horror, utter misery, and resignation. It’s a riveting arc that never lets you forget a single moment of Goreng’s experience. Everything contributes to his transformation – the good and the bad – making The Platform a hugely effective character study, testing Goreng’s willpower in times of great distress.

The production design and visuals effects in The Platform are also staggeringly impressive. Desola and Rivero’s genius concept heavily relies on the texture of the facility and Gaztelu-Urrutia’s ability to establish geography, and The Platform is masterful in that respect. The design of the floors, the movement of the platform itself, the pacing, the intensity, Aránzazu Calleja’s unforgettable recurring theme in the score, the mere sound effect signaling the platform’s arrival, the exceptional supporting performance from Zorion Eguileor who plays Goreng’s cellmate Trimagasi – this list of achievements can truly go on and on.

I still can’t quite wrap my head around the fact that this is Gaztelu-Urrutia’s feature directorial debut. I suspect this would be an immensely challenging concept to bring to screen for even the most seasoned filmmaker. What Gaztelu-Urrutia accomplishes here exhibits such confidence, understanding and control of his craft, and it’s a sure sign that Gaztelu-Urrutia knows how to lead a team, bringing the most out of every creator he’s collaborating with and then bringing their work together with great expertise. The Platform does fall short of total perfection due to one particular plot point that’s introduced and expanded later on in the movie that isn’t quite as refined as the earlier beats, but it’s still a must-see that will likely wind up being one of the best horror movies of 2020.