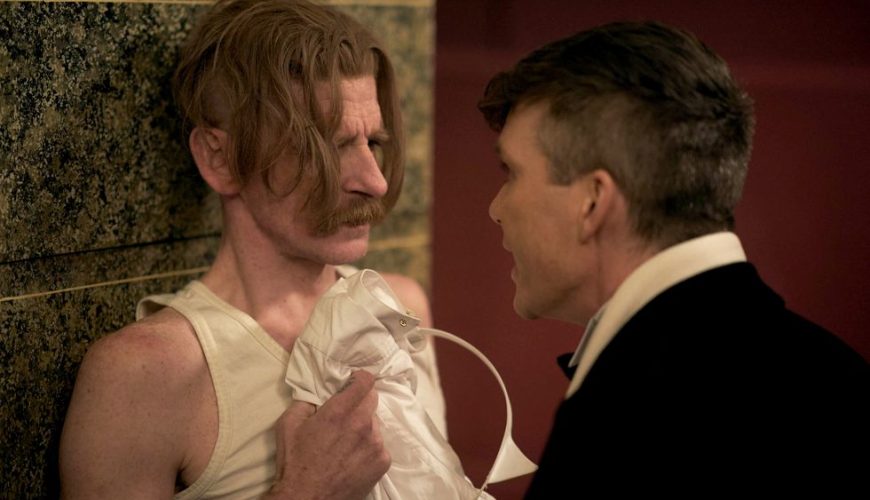 Peaky Blinders’ series finale saw Arthur Shelby back in fine form for one last, ultra-violent blow out in the name of his Aunt Polly, complete with machine guns, mustard gas and fury. It was a glorious return to form for a struggling character.

The character, played by Paul Anderson, has been the brawn to Tommy Shelby (Cillian Murphy)’s brains since the first time we clapped eyes on the flat-cap wearing, suit-donning gangster clan, becoming a firm favourite in the process.

But then, as the seasons progressed, Arthur kind of got lost in translation, with his role as the second-in-command diminishing to almost nothing by the time season six came around. He didn’t even get a proper on-screen goodbye.

It was a shame to see such a character, plagued with anger and mental health issues, become somewhat of a butt of a joke. Arthur’s always been fun to watch, but even with his witty one-liners and slight naivety despite his older age, he was always tinged with something a little darker.

Over the series, it’s been clear Arthur has desired more from the life the Peaky Blinders afforded him, though he could never quite nail down what that ‘extra’ thing was. At one point, he sought solace in religion and his wife, Linda, and in other moments he wanted the power and respect Tommy had, believing he was owed as such as the eldest brother. But there was always a comfort in him knowing his place within the ranks of the Shelby Company Ltd, and their less-than-legal pursuits, so he remained.

He was also the more accessible of the brothers. If you wanted to get to Tommy, the best way to do that was to get Arthur to like you. He was the most welcoming to Finn as he was trained up into the family empire, and remained so when Duke Shelby (Conrad Khan) – Tommy’s secret son – turned up without warning in season six. For his sins, Arthur has proven to be a good judge of character, and someone willing to teach others where Tommy fails.

But by season five, he began to lose his grip on reality somewhat, with his violent urges resulting in him hurting those who didn’t deserve it, Linda leaving him, and seeking refuge in opium.

In the four-year time jump between seasons five and six, Arthur had become a full-blown opium addict who could barely stand up straight long enough to wear a Santa outfit for the Shelby family’s children.

Season six let Arthur down badly. His addiction seemed a convenient excuse to limit his screen time to make way for more of Tommy’s depressive thoughts, while a million different plotlines took their time to converge into one.

When Arthur was needed, he was having a clean spell, and when he wasn’t, he was an afterthought. Addiction does do this to a person, there’s no denying that, and the ways in which opium was used during that time period were considered a medication rather than an addictive drug. Even Tommy acknowledged that parents gave it to their kids when he shut down the opium den that Arthur frequented so much.

But within the scheme of the show at this point in time, it feels like they weren’t sure what to do with Arthur. He’s not the only Shelby to get this fate, with Finn (Harry Kirton) only getting any prominent story time in the final two episodes.

He was added into scenes where he didn’t need to be – like when he joined Isiah and a group of nameless new Peaky Blinders gang members to go down to the Liverpool docks, only to crumble upon meeting Hayden Stagg (Stephen Graham). We saw Arthur completely break down, only to be picked up by his suspenders by Tommy, who gave him a motivational heart-to-heart in order to get clean.

It turned out that was literally all he needed, and in the finale he was suddenly not only back to his old hoodlum and violent self, he proudly declared that he’s clean and “the dragon has gone”, suggesting he’s fully beaten his addiction. Though you never see them in a scene together, it’s even suggested he’d patched things up with Linda, who had shot him in season five and disappeared after leaving him.

Linda turned up in less than a handful of scenes in season six, always with Tommy, revealing that she is doing missionary work with the church. But by the finale, she was so back in the fold a matter of weeks later that she was present at Tommy’s goodbye dinner to bid farewell to the family unit as he prepares for his death.

You know who wasn’t at the farewell dinner? Arthur. The one person he actually told the truth about his believed tuberculoma condition. This later turns out to be a trick by Mosley, but as far as Arthur and Tommy are concerned at the time of the party, it was 100% real – and the dinner was the final time the tight brothers could ever see each other.

Arthur’s absence was put down to him looking at fish in the local lake because he doesn’t like goodbyes, with Linda reading a short note on his behalf.

It wouldn’t be the first time that a show has used that kind of plot device in order to excuse a character’s absence. But it’s ultimately really tragic that Arthur and Tommy’s friendship and brotherhood that provided a soft point for these otherwise seemingly unshakable men through multiple family deaths, the growth of a business and a war, wasn’t given the closure it deserved.

The Peaky Blinders film is now on its way, so the pair may well be reunited should Tommy decide to return to the family fold. But if they do, we hope Arthur gets the kind of ending he truly deserves – which in our opinion, is either finally finding some kind of peace, or going out in a hail of gunfire.

Peaky Blinders series 6 is available now on BBC iPlayer, and will be available on Netflix from June 10.