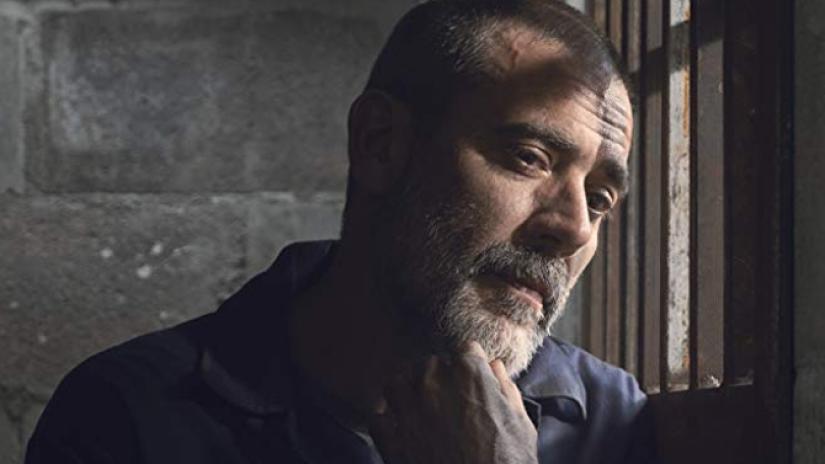 WARNING: The following article includes spoilers for The Walking Dead Season 10, Episode 6, “Open Your Eyes,” which aired Sunday on AMC.

In this week’s episode of The Walking Dead, “Open Your Eyes,” many characters do indeed have their eyes opened. Those revelations had varying resonance for the audience, with one rising above the rest as truly shocking — and tragic.

At Alpha’s behest, Gamma has been meeting with Aaron, and it’s…awkward. Aaron is trying to connect with her, while she’s trying to pump him for information. And because he knows it, she isn’t getting too much out of him. However, she’s surprised when she learns that not only does Aaron have bread daily, he also has a daughter and claims there are lots of kids in Alexandria. This impacts her more than she’d like to admit, given it was the loss of her baby that ultimately led to the death of Gamma’s sister. When Aaron attempts to get her to talk about her loss, Gamma takes off.

Later, she encounters Alpha who sets her straight about Aaron’s lies and his desire to kill the Whisperers. This recommits Gamma to their cause and convinces her she has to do a better job getting intel from Aaron.

That night when Gamma meets with Aaron again she’s fortified. And when he gets close enough, she grabs him, holds a knife to his throat and demands he answer her questions. Just then, Carol appears, ready to defend Aaron. But it’s not Carol that fazes Gamma, it’s Lydia who appears seconds later. Gamma realizes Alpha’s been lying to her and all the Whisperers about sacrificing her daughter for them. Everything she believes is destroyed as she runs away.

In Alexandria, Carol and Daryl throw the blind-folded Whisperer that Carol captured in the previous episode into the prison cell. This displaces Lydia who’s been staying there since the night Negan escaped. After consulting with Lydia, Carol decides to try to get information out of the Whisperer with something other than threats and pain — she gives him bread with jam and honey and casually discusses lunch. As he bites into the bread he looks ecstatic, but then he spits it in her face. Carol’s not going to get anything out of him that way.

So torture it is! No matter what Carol and Daryl do to him, the Whisperer refuses to give up anything about Alpha or the horde. Still, he talks an awful lot about how Alexandria is weak and Alpha’s awesome. In the process he mentions the story Alpha’s peddled to her followers: that she killed Lydia for them.

Carol wants to show the Whisperer that Lydia’s still alive as it might be the one thing that breaks Alpha’s spell. However, Daryl doesn’t want to put Lydia through any more than she’s already endured. So, Carol declares she’ll let Lydia decide and goes to find her.

Before she can return, though, the Whisperer gets violently ill and dies. Seeing what happened, Carol takes off with Lydia on a horse, claiming Lydia can still help.

That night, when they save Aaron from Gamma, Lydia is confused by Gamma’s response to her. Carol explains that her mother told her people that she killed Lydia. That’s when Lydia puts two and two together: Carol claimed she wanted Lydia to help but she was just a pawn in Carol’s game. Carol tries to stop her, but Lydia runs off into the woods alone.

Meanwhile, Siddiq continues to suffer from severe PTSD from the time he was held by Alpha, as he has since the beginning of the season. At the same time, a shocking number of residents are sick and don’t seem to be getting better. Siddiq is running himself ragged trying to help them — or at least keep them hydrated — and figure out what could be causing the illness.

Siddiq and Dante are also called in to treat the Whisperer prisoner for his injuries, but it proves to be too much for Siddiq. He leaves the task to Dante. But then the Whisperer takes ill several hours later. After he gets violently ill and dies, Siddiq realizes Dante poisoned the man with hemlock. Dante is shocked; he thought he was giving the Whisperer something for pain and inflammation. It never occurred to him hemlock would be in the bag, because Siddiq packed it.

After this revelation, Siddiq again makes his rounds checking on the residents who have taken ill. He goes to Cheryl’s place, one of the older residents who’s been sickest the longest, and finds her bed stripped and no sign of her. He finds Dante preparing to bury her body. Siddiq is devastated. This triggers a flashback to his time with the Whisperers. In his horror and fear, Siddiq jumps in the nearby lake and nearly drowns. Rosita pulls him out.

She finally gets him to confess to the terrible flashbacks he’s been having. He talks about how when Dante’s around he reminds him of Enid and that reminds him of how he failed her with the Whisperers. Rosita doesn’t question the connection but tells Siddiq none of it’s his fault. Siddiq feels like he didn’t help the people he loved when the Whisperers hurt them, and now more people are dying on his watch. Maybe he’s not smart enough to help them either because he can’t figure out the root of their illness. There’s no connection between the patients. They don’t live or work together, they don’t even eat the same foods. Then he realizes what the common denominator between the patients is: it’s the water.

Eugene and Siddiq had set up a system of water pumps but only some of it came from drinkable sources. With Eugene in Hilltop, the only person providing water to Alexandria is Siddiq — and he’d been serving some people from the undrinkable water source — a terrible mistake that’s cost at least one resident her life. Needless to say, for the third time that day, Siddiq is left stunned and saddened.

Later that night, Dante comes to see Siddiq. Siddiq has confessed about the water and Dante tries to take some of the blame. When Siddiq denies Dante has any responsibility, Dante delivers a speech about the special unity of the village that is Alexandria.

When he’s directly behind Siddiq, Dante starts clicking his tongue and Siddiq immediately goes into a flashback to his experience with the Whisperers. In the flashback, a Whisperer pins him in place and forces his eyes open so he must watch his friends get slaughtered.

Siddiq realizes who the man is behind the skin mask. He turns around and makes a break for his large knife, which is sitting on a nearby chair. Unfortunately, Dante is too close. He grabs Siddiq and chokes him to death. As he strangles him, Dante confesses he didn’t want things to happen this way, not with Siddiq. Then as the life drains out of him, he tells Siddiq to close his eyes.

Fans have speculated that Siddiq or Dante may be a Whisperer spy. Now we know it’s Dante. It seems he’s been triggering Siddiq’s flashbacks for weeks. More insidiously though, his ability to control Siddiq may have extended beyond that. It’s under Dante’s influence that Siddiq accidentally gave the residents the water that made many of them ill. Now that Siddiq is dead, we may never find out the extent of Dante’s manipulations. The question that remains, though, is: exactly what will this mean to the Alexandrians who are still alive and have no idea there’s a Whisperer in their midst