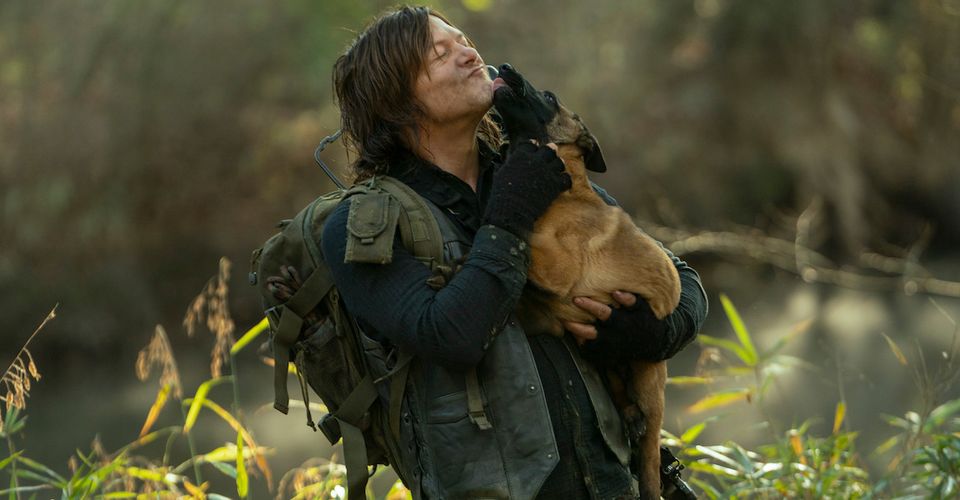 The Walking Dead’s Norman Reedus revealed he wanted to adopt his canine co-star.

“That dog is my favorite flavor of dog,” Reedus shared in a new behind-the-scenes featurette posted on The Walking Dead’s YouTube channel. “I just love German Shepherds,” the actor added. “And to see [the dog] as a puppy really geeked me out.”

When Reedus first met the German Shepherd puppy he would be filming with, he asked the crew if he could keep him. He reflected on the crew’s reaction, noting, “They were like, ‘Absolutely not. This is our super puppy and you can’t have it.'” Reedus added, “I really enjoyed that day. I was looking forward to puppy day.”

Series writer Angela Kang offered her two cents about the origin story of Daryl’s pet, Dog, explaining, “We always thought, on the writing side, that the dog came from somebody that he was connected to during that time.”

Season 10, Episode 18, “Find Me,” showed flashbacks to Daryl five years before the events of the current season. The episode explained that the puppy he ran into while searching for Rick Grimes (Andrew Lincoln), belonged to Leah. Additional flashbacks revealed that Daryl met the owner of Dog and had a brief romantic relationship with her.

“Up until this point, we thought he spent those six years looking for Rick and that was it,” Executive Producer Denise Huth stated. “But he came back with this dog, and I think we all sort of wondered, ‘Well, where did the dog come from?'”

Huth added that having Daryl take ownership of Dog after he discovered Leah was missing was an important revelation about his past. “Daryl doesn’t know what happened to her,” Huth explained. “But that time is definitely a part of him. And, you know, obviously, her dog is with him every minute. So there’s a constant reminder in his life of this woman and this relationship.”

My name is Damyan Ivanov and i was born in 1998 in Varna, Bulgaria. Graduated high school in 2016 and since then i'm working on wordpress news websites.
Norman Reedus, The Walking Dead