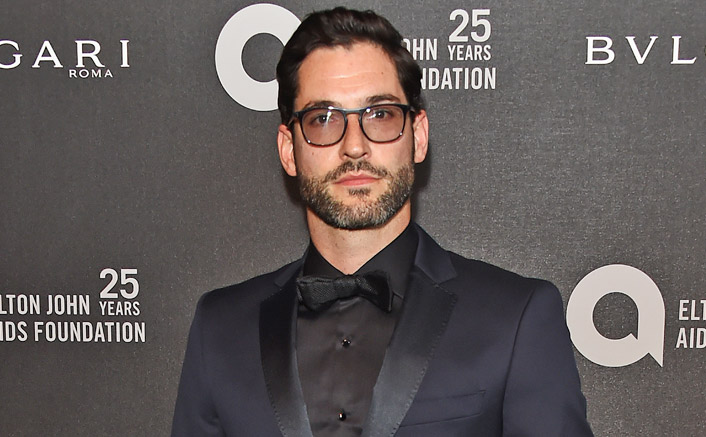 Tom Ellis starred as the frontman Lucifer Morningstar on Netflix’s hit fantasy series, Lucifer. Although the show came to an indefinite end in season six, the actor has announced a brand new project inspired by the series.

On Friday, the actor took to Instagram to announce his newest clothing collection, inspired by Lucifer. Speaking to his millions of followers, Tom declared: “Hello, lovely Lucifans, it’s been a while but you have all told me what you truly desired and I have tried to deliver.”

“It is a Lucifer collection designed by myself just in time for Christmas,” before telling his fans where to find the merchandise.

He gave the Netflix streamers a preview of the collection as he sported a jumper with his character’s face on it. This caused a frenzy with fans who weren’t ready to say goodbye to the series and they took to his comments to share their excitement.

“You instantly cheer me up, you’re the best, we love you so much,” they continued.

Micabundalo tagged another fan in elation and stated: “We should get some.”

MartynaDubensky commented: ”This has made my day, thank you Tom!”

PrettyFlash shared: “WOW OKAY! THERE GOES ALL MY MONEY.”

Tom’s co-star Rachael Harris who played Dr Linda Martin also responded to the announcement and wrote: “Love this, Love you.”

The two shared many scenes together as Linda was Lucifer’s therapist during his time in Los Angeles, the pair eventually began sleeping together in exchange for sessions.

Lucifer decided to seek counsel on a consistent basis for personal problems including his relationship with Chloe Decker (played by Lauren German). He would also look for advice on his family troubles but would use biblical metaphors to conceal his true identity.

After abdicating his throne as the ruler of Hell and relocating to earth as a nightclub owner he was very secretive about revealing who he really was. However, in season two Lucifer finally showed Linda his real face after their relationship got closer – which led her to become the first human to know the truth about his existence.

Linda went on to also become the first mother of a child fathered by an angel on Earth after she gave birth to a child with Lucifer’s older brother Amendiel (D.B Woodside). Eventually, in the epic season finale, Lucifer returned to hell to become its healer and help the lost souls in the realm.

Despite season six, opened with the possibility of him becoming God he procrastinated with the idea and instead viewers saw Armendiel ascend to the throne. Although the series has come to an end without the possibility of a spin-off, thankfully fans can continue to show their support by rocking the latest merchandise.

My name is Damyan Ivanov and i was born in 1998 in Varna, Bulgaria. Graduated high school in 2016 and since then i'm working on wordpress news websites.
Lucifer, News, Tom Ellis, TV Series