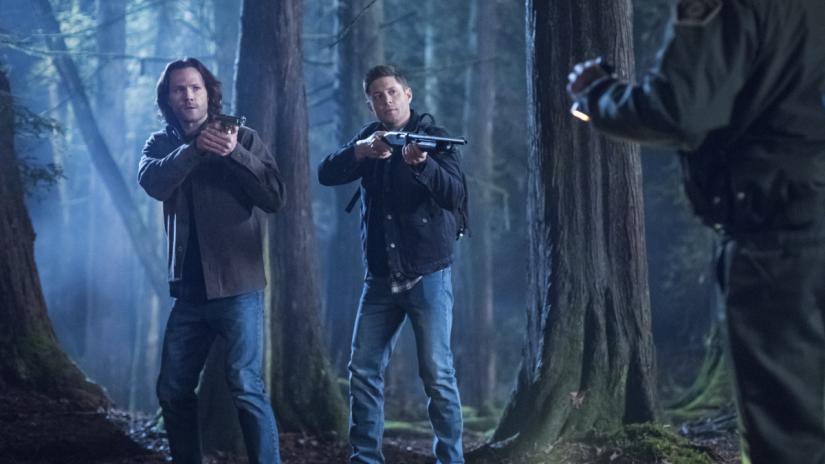 The beef between the Winchesters and Chuck/God beef has been on the backburner since Supernatural‘s Season 15 premiere, with both the brothers and the All-Mighty retreating to lick their wounds. In Sam and Chuck’s case, the injuries were literal, as they both suffered an incurable mark when Sam fired Chuck’s all-purpose Equalizer gun at the end of Season 14.

Now, in “Last Call,” Sam catches a lucky break — and all it (nearly) costs him is his life, having recently learned from the resurrected Lilith that Chuck has been busy penning a brother-on-brother brawl to end the Winchesters with.

Castiel, who has been having some alone time following a nasty fallout with Dean, returns to the Bunker to find Sam researching how to deal with their God-and-Lilith problem alongside Eileen Leahy, the formerly dead hunter who he magically revived in the last episode. The Angel of the Lord comes bearing a viable plan of attack: “When you shot God, it fired a piece of your soul,” he informs Sam. “So there may be some of you inside Chuck.” He suggests “probing” the wound to try and exploit this link, which, as we saw in the first episode of Season 15, isn’t the best idea. Yhis time, Castiel’s efforts have an even worse effect on the younger Winchester brother — knocking him out cold.

Since the wound is divine,  Castiel can’t help Sam, so he calls the slimy shaman, Sergei, who we met in Season 14 through Arthur Ketch. Eager to have a sniff around the fabled American Men of Letters Bunker, Sergei arrives and, after inspecting Sam, delivers his prognosis — Sam is dying. “Most wounds want to be healed, to be whole. But this, this wound is different. It goes down to his very soul. But also out into the world. […] As you probed deeper, you forced the soul to stretch from Sam’s body to… I don’t know where. But now, it’s like a rubber band. If it is stretched too far, too long. Then, pop! It snaps, and Sam dies.”

As Castiel and Sam now, the thing Sam’s soul is stretched out to is Chuck, but the little Sergei knows the better. Claiming he can fix Sam, the shaman rubs some kind of grassy concoction on the wound, which suddenly sends him into spasms because — Sergei being Sergei — his actual intent all along was to send Sam closer to death.

In return for the real cure, the mystic man demands that Castiel brings him an item he desperately wants from the Men of Letters’ stash — a key that can open Death’s Library. It’s a safe bet that he’s referring to what Billie (Death) described to Dean in Season 13 as her “reading room,” which contains files on how every living thing will die.

Proving he’s fully acclimated to his dark side, Castiel gives Sergei a counteroffer: he shows the shaman a photo of his niece, sent to him by Bobby, and threatens to give the hunter permission to hurt the girl unless Sergei saves Sam’s life. Commending the angel on his despicable tactics, the Russian complies.

It’s not all doom and gloom for poor Sam, however. When he’s thrown into fits of agony by Sergei’s fake remedy, he taps into a flashback reel of everything Chuck has been up to, which includes his sister, Amara, telling him that he’s “weakened” as well as his admission that, in this state, he’s lost his omnipotent ability to spy on Sam and Dean. Once conscious again, an excited Sam relays this information to Eileen, Castiel and Dean. “Chuck is weak. I think we can beat him. I think we can beat God.”

Since Lilith melted down the Equalizer, the team seem to be lacking the actual means to pull this extraordinary feat off. But, with Sam’s newfound title as Rowena’s successor and, now, his knowledge of Chuck’s diminished nature, it seems to be within the realm of possibility again, and the episode raises an intriguing point about the Key of Death that Sergei was after. Could Billie have a file on God’s demise like she does everyone else? The Winchesters might want to have another sift through that arsenal of magical items they’ve been sitting on this whole time and find out.