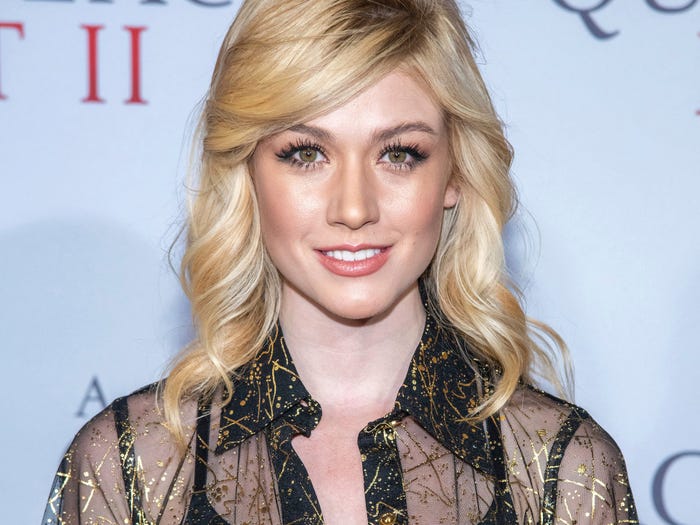 “Arrow” star Katherine McNamara explained how she filmed an entire horror movie from home during the coronavirus pandemic.

“I was actually really excited,” the 24-year-old actress, who’s promoting her partnership with Alcon and PRECISION1 for their “See What Happens” campaign, told Insider. “I needed to be creative and I needed to do something and it was probably one of the most fulfilling and terrifying experiences.”

The film centers on TV stars who team up to make a horror movie after their show’s cancellation and unintentionally summon a demonic spirit, per Vanity Fair. The movie was filmed in 10 days total, including some reshoots. Despite not working with her costars in-person, McNamara said it was surprisingly easy to build chemistry with the cast.

“We kind of instantly clicked,” the actress said.

She added: “It’s really fun to get to actually work with people that you’ve never met and some that you have. We have this weird friend group now even though we’ve never actually spent time together.”

McNamara told us that she was on board for the project, which was cowritten by Nick Simon (who also directed) and Luke Baines, early on. The actress previously costarred on Freeform’s “Shadowhunters” with Baines and has been friends with him for years, so being part of the movie was an easy decision.

But most of the challenges arose due to the lack of a film crew and set.

The actors had to be responsible for the technicalities of filmmaking, like figuring out lighting, getting familiar with sound design, setting up camera shots, and doing their own special effects makeup. With the help of a “patient” director of photography, McNamara and her costars were hands-on throughout the process, even with transferring the files, which she called “the most stressful job.”

The actress said that she was always grateful for the crews she’s worked with, “but this was a whole new experience and “really gave me a new appreciation, because I didn’t really know how the magic happened until now.”

McNamara’s experience with filming stunts for shows like “Shadowhunters” and “Arrow” also came in use while making this movie. Coincidentally, the horror movie’s stunt coordinator and choreographer, who assisted the stars via video, worked on “Shadowhunters” as a stunt double for Emeraude Toubia.

For McNamara, one of the best things about being able to work from home was that she mainly only needed to be in wardrobe from the waist up.

“I’ve been in sweatpants the majority of quarantine, including during filming, which was actually a lot of fun,” she said. “I think at that point, it was a couple of months into quarantine and I was sort of in a routine because we still weren’t able to go out. we had to be stuck literally in our houses and it gave me that change of pace that I needed to reinvigorate for the next few months of quarantine.”

Even though this film experience was drastically different from what actors are used to, the stars made the most of it and celebrated the completion of the movie by having a wrap party via Zoom.

“It was awesome because we were all at home and not having to worry about, ‘When do we have to go home? How do we get an Uber? There’s no Uber in quarantine,’ and all these other things,” McNamara told us. “We were able to just have fun and participate and really celebrate this weird little experiment that we’ve done.”

As part of her partnership with Alcon and PRECISION1, McNamara, who recently started using their contact lenses, is encouraging fans to head to www.TheLensLoveQuiz.com to take “The Lens Love Quiz,” which will help users determine their lens love style and figure out what works best for them.