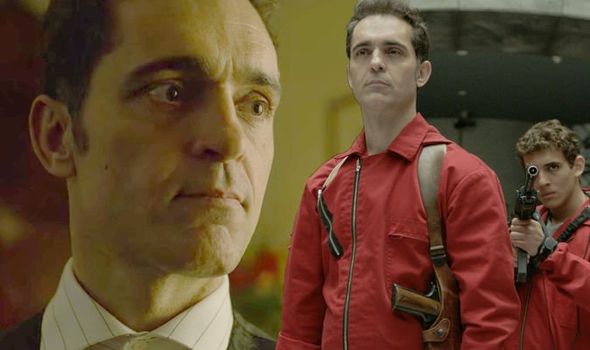 Known worldwide for his role as Berlin in the television series La casa de papel, the Spanish actor Pedro Alonso decided to show “a piece” of his “heart”, of his “guts”, with writing.

Alonso (Vigo, 1971), who passed through Bogotá a few days ago, arrived with ‘El libro de Filipo’ (Grijalbo), his first published work and which, he says, is the product of some regressions in which he had a “brutal journey” to Antiquity, to the Roman Empire, and recounts what he lived there.

“I know it sounds a little crazy, but I tell it in the book. I know Tatiana Djordjevic, that she is my partner and that among other things she is a hypnotherapist; she offers me to do some regressions, I had never done them, and I have a brutal trip in the first regression , ”says the actor.

On that trip he was Philip, a Roman soldier who travels to the East and “infiltrates a rebel group”, whose leader Yilak “changes his life”.

“What I have written is an apocryphal gospel, I suddenly entered that field from a place that made me see it with different eyes and realize that I was seeing a world that we have all received through our religious cultural heritage from another place. So for me, that’s a shock. I put words to it and I write it, the name of Yilak, who is the teacher, the messiah”, he assures.

A late facet
Writing has always been part of Alonso’s life , so much so that when he studied drama he also began his career as a journalist, which he never finished.

As he reveals, the “urge” to write “has always been there”, but there were times when he tried and stopped, because, as he says, “he was doing it wrong, frankly wrong”.

“I think because it put too many ideas, it was dense, it didn’t breathe. I vaguely remember a time when I said: ‘It’s not my turn in this life’. But seven years ago, after several years of thinking a lot, especially painting a lot, I opened a file”, he says.

In that document he began to write and after three years of capturing his ideas, there he reached the end.

“I printed it, it had 570 pages, I passed it on to a very talented writer friend, and he told me: ‘Pedro, this is a book.’ I told him: ‘Well, I would have to edit it, right?’ So he told me: ‘No, no, no, like this’. And he impacted me, I read it and it is true that I found my narrative voice there. But it was so private, so exposed, not only for me, but for people from my most intimate environment, from my professional environment, that I did not have the courage to publish it, ”he details.

Writing has remained alive ever since in Alonso’s life, and he says that his next project is a documentary that he will produce in Latin America and that “has a point of connection with ‘El libro de Filipo’ ”.

“If we speak in mythological terms, the documentary we will make is The Odyssey, the story of a journey through places that are more than they seem to return home, but the house is not understood as a physical space but a space in which you you connect with who you really are. We are going to record The Odyssey”, she expresses.

The Berlin Surprise
The success of ‘The paper house’ turned Alonso into a global star, since Berlin is one of the protagonists of the series and its development throughout the five seasons, in which it is always at the center of tensions, It has made him a character that generates love and hate among fans.

“No one can prepare you for some things that come to you in life (…). Nobody prepared me for a moment with an energetic movement of this caliber because, of course, I was a middle-class actor trying to survive in the profession, ”he relates.

He rightly states that “staying alive ‘acting'” seemed like a miracle to him and the popular series arrived, which was seen all over the world on Netflix: “Suddenly, one day the curtain opens and you are traveling through space,” he says.

“I spent two years denying it. They told me: ‘How about the phenomenon of La casa de papel?’, and I said no, we’ll see. But now four and a half years have passed, and it is true that the ship has moved very strongly. I try to receive it in a very grateful way, but that means working on it, media exposure at that level is very paradoxical and I think it’s a great test”, she says.

And despite the fact that the series has already ended, he will continue to be linked to it because he will star in the Berlin spin-off, which is already “underway in terms of writing”, and will do so after finishing the documentary that is just about to start.

“I know that he was born from La casa de papel, but they are working so that he has his own configuration (…).

“We’ve come this far, at this point I’ve done several lives of the character, a darker part at the beginning, a lighter part in the middle, a more ambivalent part at the end, and now we’re going to do something that’s not exactly the same. ”, he assures.