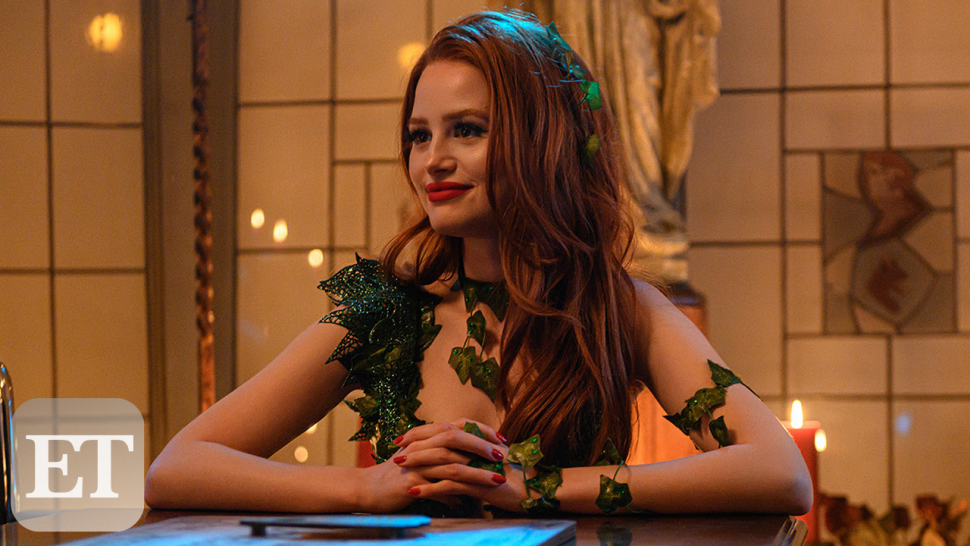 While The CW’s Riverdale will most likely not be a part of the Arrowverse’s “Crisis on Infinite Earths” event later this year, that isn’t stopping the its characters from having some DC-themed fun of their own.

The first photo — which was posted to Twitter by ET’s Leanne Aguilera — offers a full look at Cheryl and Toni’s costumes. Meanwhile, two additional images have been posted to the publication’s website. The first sees Cheryl sitting at a table in her outfit. In the second, she is joined by Toni and Nana Rose, with the three using an Ouija board.

When asked how she felt about donning the red and black outfit worn by the Clown Princess of Crime, Morgan said she was, “So Pumped! I haven’t seen this version of Harley Quinn before because it’s from the original Harley Quinn costume, but I really like it.”

Petsch was also rather excited when showrunner Roberto Aguirre-Sacasa told her she’d be dressing as DC’s resident plant-loving villain-turned-antiheroine. “Definitely excitement and also [I feel like this is] very perfect for our characters,” Petsch shared. “I didn’t know how far we were gonna go with these outfits. I didn’t know what our costumes [department] was gonna do and they never disappoint. I mean, they really went all out.”

That said, the DC costumes weren’t the only thing Petsch was surprised by. She was also apparently caught off guard when she found out Cheryl and Toni’s Halloween plans consisted of taking part in a séance. “I didn’t think Cheryl and Toni would do Halloween the way they’re doing it, but I’m not going to spoil exactly what that is,” she said. “However, we do obviously get very dressed up and things take a very strange turn — but a very Cheryl Blossom-esque turn. A very Blossomy turn.”

Despite Archie Comics being separate from DC, the two entities seemingly share a rather healthy working relationship. Riverdale, after all, is produced by Warner Bros. Television and airs alongside The CW’s various DC TV shows. Furthermore, there have been plenty of crossovers as far as the two publishers’ comics are concerned, such as 2017’s Harley & Ivy Meet Betty & Veronica.