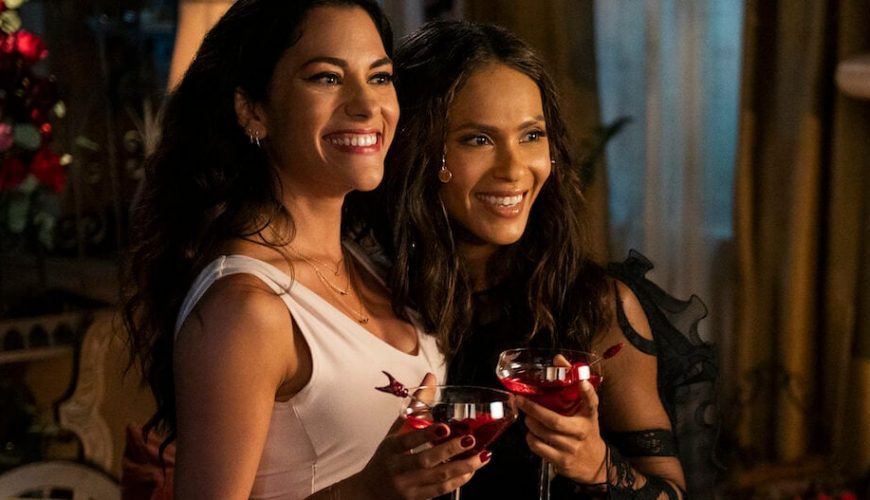 Lucifer fans were thrilled to witness the demon Mazikeen and the world’s first woman Eve finally tie the knot, but some are convinced the grounds of their engagement don’t quite add up.

The sixth season of Lucifer brought the Biblical adventures to an end last month on Netflix. The devil’s final showdown is still one of the most popular dramas on the streaming service, but the latest outing for Lucifer Morningstar (played by Tom Ellis) has become divisive after some major plot holes have been uncovered.

Lucifer’s best friend Mazikeen (Lesley-Ann Brandt) and her wife Eve (Inbar Lavi) are at the centre of yet another plot hole spotted in the sixth and final season of the fantasy drama.

Maze and Eve were finally able to get married during a rare moment of respite for the devil and his friends.

However, their engagement was fraught with disagreement at the start of the new season and they were forced to overcome some differences before they said ‘I do’.

After Lucifer achieved God-status last season, both of them were preparing the move down to Hell when Maze agreed to become the new Queen of the Underworld.

Thankfully, they realised neither of them wanted to spend eternity torturing damned souls, and decided to remain on Earth as bounty hunters.

Sadly, fans weren’t happy with their constant bickering, and one fan even maintained it flew in the face of Eve’s development in the series so far.

Redditor cannotbelievedis posted: “Eve doesn’t know what she’s going to do down there, because she’s only going there for Maze.

Since she arrived in season four, Eve has struggled to achieve her own independence.

In her previous relationships with Adam (Scott MacArthur) and Lucifer, the first woman made it her aim to please her partner without considering what she wants from life.

Things seemed to be looking better once Eve returned in season five and started to carve her own path.

Despite all her growth over the previous two seasons, Eve seems to be back at square one just before she plans to spend the rest of her life with the potential Queen of Hell.

The post continued: “I wish the writers would pay more attention to these things.

“Eve was supposed to show growth since she came back from her “finding herself” journey.”

Viewers were gutted when there was no sign of Eve for the first eight episodes of season five.

Thankfully, she appeared in the second half of the penultimate season sporting an edgy new look and following in Maze’s footsteps to become a bounty hunter.

Even so, this fan criticised the writers of completely regressing the character back to her initial season four demeanour when she and Maze finally get together.

“Instead, the only realization she got after that journey was that she was in love with Maze, which isn’t entirely about herself,” the fan added.

“Also the fact that she’s a bounty hunter like Maze, I mean, couldn’t they let her do another job? This is just lazy writing at this point.”

Their wedding was certainly a fan favourite moment of Lucifer’s final season, but this viewer doesn’t think the writers gave Maze and Eve the satisfying conclusion they deserved.

My name is Damyan Ivanov and i was born in 1998 in Varna, Bulgaria. Graduated high school in 2016 and since then i'm working on wordpress news websites.
Lucifer, Lucifer 6, Lucifer finale, Lucifer Season 6, TV Series