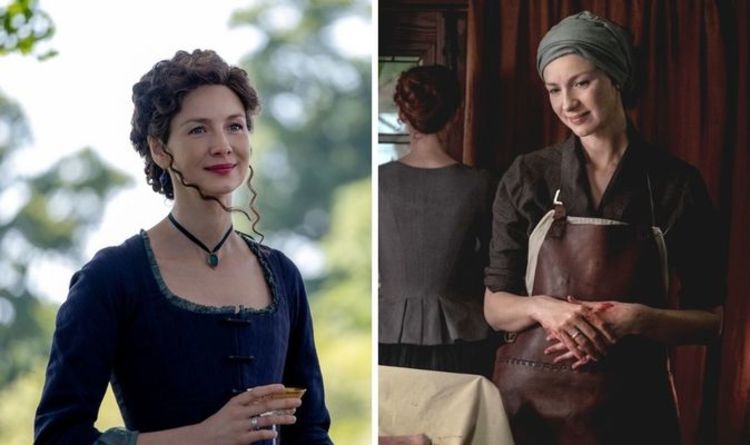 Eagle-eyed viewers seemed to have spotted a major mistake during season three of Outlander. The Starz streamers noticed something odd regarding Claire Fraser’s (played by Caitríona Balfe) knife in the scene in which she tries to save the life of her attacker.

Taking to screenrant.com, the viewer posted: “We’re just a couple of minutes into the episode, right after the opening theme; it’s the dead of night, and Claire is peacefully sleeping alone when suddenly, she is ferociously attacked in her bed by a strange man who threatens her.

“Claire pulls a knife on him, warning him to back off, but when he refuses she is forced to slice at him in self-defence – before he trips over and knocks himself out anyway (and she later attempts to save his life).

“After she attacks, the blade of her weapon can be seen wobbling just a little, showing that it is, in fact, a harmless rubber prop.”

Claire Fraser was a time-travelling nurse who dedicated her life to helping others, so it wasn’t odd that she wanted to save his life.

During the scene, she even confused husband Jamie Fraser (Sam Heughan) tried to help before realising the mysterious man made an attempt on his life.

The attacker’s identity was revealed as John Barton (Ian Conningham), an exciseman who had been sent by Sir Percival Turner (Paul Brightwell), a local superintendent customs officer.

John was sent to search for Jamie’s hidden case of wine and whisky but wound up getting killed by his wife.

This was all a result of Jamie’s secret smuggling business.

In the previous episode, Sir Percival tried to extort him even though the pair had an agreement to keep the indiscretions hush.

Although her husband was against it, she went to the apothecary cabinet to get medicine as she felt like it was her medical duty to help him.

She picked up laudanum hoping it would keep him pain-free during the operation.

While she was away, Jamie, Ian Murray (Steven Cree) and Fergus Fraser (César Domboy) were getting rid of the alcohol stash.

Smuggling business exposed, he was desperate to sell the contents even if it meant doing so at a cheap price.

As Jamie returns, he tries to keep John quiet, despite the fact he is barely hanging on to life.

After Claire returned with the laudanum, she dived straight into operating, eager to relieve pressure from his brain.

But, despite her best efforts, John died during surgery.

When she told Jamie, he scoffed and said that he wouldn’t grieve. That’s when Claire told him that she puts judgement to the side while operating.

Even if it means saving the life of someone who wanted to take yours.

My name is Damyan Ivanov and i was born in 1998 in Varna, Bulgaria. Graduated high school in 2016 and since then i'm working on wordpress news websites.
outlander, TV Series