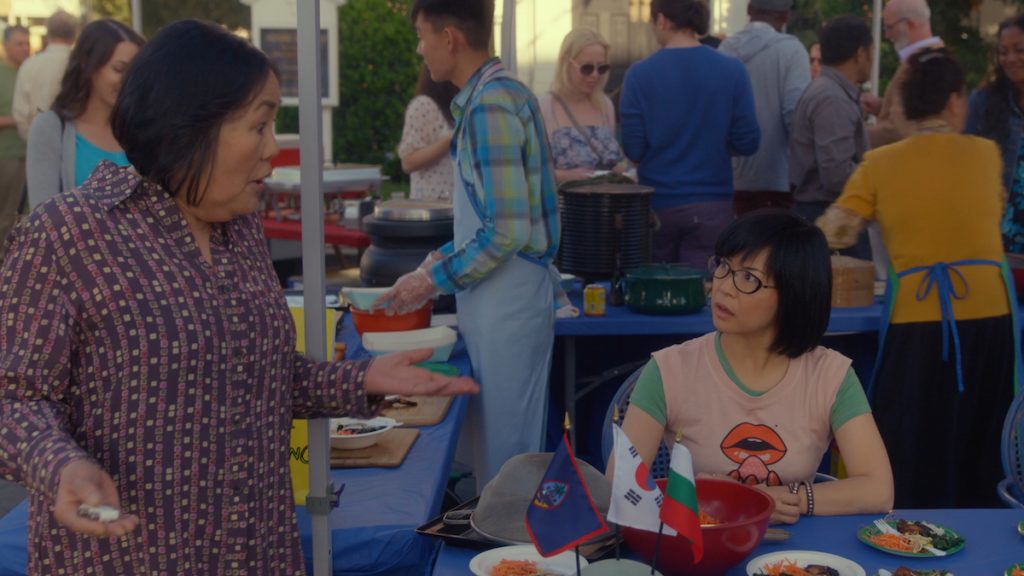 Dave Rygalski (Adam Brody) will forever be remembered as one of the best men on Gilmore Girls. Sadly, he didn’t get his happy ending with Lane Kim (Keiko Agena). The character is actually based on a real person, and one of his storylines happened in real life.

Anyone else feeling fuzzy walking down memory Lane? #GilmoreGirls pic.twitter.com/QbwYaylLbe

Dave Rygalski was introduced in season 3. Lane auditions to be a drummer in his band, and they pick her.

Eventually, Dave and Lane want to date. But her overbearing mother makes that hard for them. Dave works hard to be close to Lane and get her mother’s approval. He pretends to be a Christian guitarist and perform at Mrs. Kim’s (Emily Kuroda) Thanksgiving service.

He later tells Mrs. Kim that he has feelings for Lane. Dave explains to her how he’s a good person, and she replies with a quote. Dave reads the whole bible in one night to figure out what the quote means but fails. Mrs. Kim tells him the quote isn’t from the bible but from Shakespeare. She is so impressed by his dedication that she let him go to the prom with Lane.

It’s a small win, given Mrs. Kim still doesn’t approve of him because he’s not Korean. Dave moves away, and Lane ends up with someone else.

“I didn’t read the bible in one night,” Rygalski told GilmoreGirls.com. “That story was close though. When I first met Helen’s parents I was grilled by her father on my religious beliefs. Helen and I did learn a song to play at a service with the family at Seventh-day Adventist nursing home.”

Rygalski said Pai’s mother is actually “the most meek, mild, sweet woman” so she’s different from Mrs. Kim. He was asked if he was upset when Brody decided to leave for another role. “I wasn’t upset,” he said. “I was glad for Adam’s success.”

Lane went on to marry and have kids with someone else. But Agena did reunite with Brody in 2020. “I’ve seen just on my end some people wanted our characters to end up together and they did not. Shame,” Brody said. “Well, in another universe,” Agena said.

It looks like Brody didn’t keep up with the show after he left. Fans asked if he was Team Dean (Jared Padalecki), Logan (Matt Czuchry), or Jess (Milo Ventimiglia). “That should be your question because you definitely know that quadrangle better than me,” he told Agena. “I’m already Team Jess,” she said.

Brody did give an answer, but had a very different reasoning for it. “I have a brother-in-law named Logan, so Logan,” he said.

Sadly, their characters couldn’t end up together like in real life. But they were able to recreate some cute memories for the couple.

My name is Damyan Ivanov and i was born in 1998 in Varna, Bulgaria. Graduated high school in 2016 and since then i'm working on wordpress news websites.
Gilmore Girls