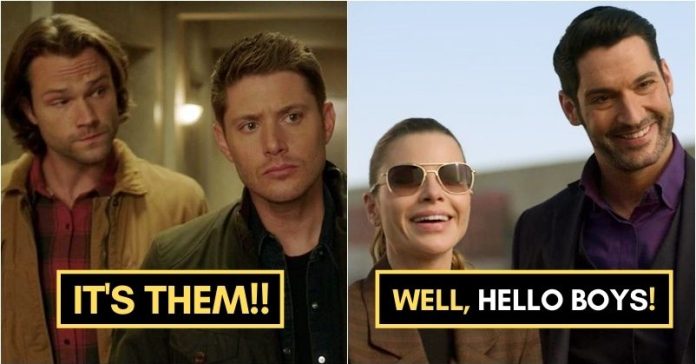 Since the moment Supernatural captivated the audiences, the show was refreshing and unique. The show is a mix of drama, horror, comedy, action, and lot more. There’s something for everyone in Supernatural. The show has a very vast universe comprising of different types of supernatural creatures and species such as vampires, werewolves, ghosts to the mythological entities such as demons, angels, God, and the devil.

The conflict between the forces of good and evil, angels and demons, God and the devil, made the show really interesting. Even though numerous shows have featured the concepts of angels and demons, but none did the justice like Supernatural. However, there’s another show which became extremely popular with the fans. The show is ‘Lucifer’ which aired on FOX, but when it got cancelled, the fans launched a viral campaign to get the show back on air. The fans’ efforts paid off when Netflix picked up the show. While both the shows share numerous similar characters and elements. We have compiled a list of several interesting references, nods, and associations which show that both shows are related.

So Take A Look At 5 Interesting Ways How Lucifer And Supernatural Are Connected!
5. ANGELS SOLVE CRIMES?
Supernatural Season 15 Episode titled ‘Gimme Shelter’ features an interesting direct reference to Lucifer. Castiel and Jack pretends to be the FBI agents titled Agent Swift and Agent Lovato. They are investigating a case and while doing so they come across a crossroad demon named Zack. The demon becomes curious seeing a pair of angels investigating and solving crimes, he says ‘So wait, are the angels solving people crime now? I’d watch that show’. Interestingly, this is a reference to Lucifer where the devil Lucifer solves crimes along with the detective Chloe Decker. Even Lucifer’s brother Amenadiel has also participated in solving crimes, he even became a cop to help others.

4. THE ACTORS
Not only the subtle references and nods, both the shows share another interesting similarity. There are a few Supernatural actors who have cross over to the Lucifer world. Rob Benedict who played Chuck AKA God in the Supernatural Universe, initially believed to be the ally of the Winchesters, but in the end turned out to be their greatest villain. His appearance in Lucifer is no different. He played a mercenary named Vincent LeMec who is responsible for the death of Dan Espinoza. He also kidnaps Lucifer’s daughter Rory, bringing the devil to his knees. See the parallel there! Another actor who appeared on both the shows is Timothy Omundson, he played the demon Cain on Supernatural whereas he played a character named Earl Johnson on Lucifer who gains God’s omnipotence through a belt buckle.

3. THE DIRECTOR
Richard Speight Jr. is best known as the archangel Gabriel among the Supernatural Universe. Initially, believed to be the Trickster, but later we learn that he took that identity to fool everyone, he’s actually an archangel. Gabriel sacrificed himself on two occasions for the boys. But you’d be surprised to know that he’s actually a talented director too. The Supernatural actor made his directorial debut with Supernatural S11 episode ‘Just My Imagination’. He also directed the episode ‘Unfinished Business’ of Season 13 in which he also appeared as Gabriel. Richard has directed a total number of 11 episodes in Supernatural. His episodes received wide positive reception from the fans and were nominated for multiple awards too. Richard Speight Jr. has also directed a total number of 3 episodes on Lucifer. His directed episodes on Lucifer also garnered a positive reaction from the fans.

2. THE LORE
Both the shows feature the character of Lucifer Morningstar. While the Supernatural’s Lucifer is more devious, manipulative, and ruthless. The LUCIFER’s Lucifer is funnier, dresses well, and could play piano. Both the Lucifers share the complicated daddy issues and preach free will. Not just Lucifer, there are various other other concepts and elements which are mutual to the shows, there are the angels and the demons, the omnipotent God, the Nephilim, characters such as Lilith, Michael, ‘Cassiel’, Cain, exist in both the Universes. An interesting fact is that both Supernatural and Lucifer appeared in DC’s Legends of Tomorrow. While Constantine and Lucifer shared a screen reminiscing their past. DC’s Legends of Tomorrow featured an episode where the main characters stumble across the set of Supernatural, there’s a mention of the Winchesters and the iconic baby also makes an appearance. DCTV already introduced the multiverse concept, this opens up the possibility that both the shows are interconnected in a way.

1. LUCIFER VS LUCIFER
Every fan is well aware of the most obvious reference that happened in Season 11 of Supernatural. Lucifer is trapped in hell, Sam visits Lucifer to talk about his visions that he believes God made him see. But he learns that it was all Lucifer’s trickery. Lucifer tries convincing Sam to let him possess. He says that with his help they can definitely defeat Amara (darkness). Sam asks him a question about what happens next after Amara, trying to find out Lucifer’s plans. The devil responds saying that he’ll move to LA, and will solve crimes. This was the time when LUCIFER’s pilot was about to air so it was a direct reference to the show. Interestingly, LUCIFER’s filming also took place in Vancouver. The studio of LUCIFER was located close to SUPERNATURAL. The cast members of both the show share a cordial relation.

My name is Damyan Ivanov and i was born in 1998 in Varna, Bulgaria. Graduated high school in 2016 and since then i'm working on wordpress news websites.
Lucifer, News, Supernatural, TV Series