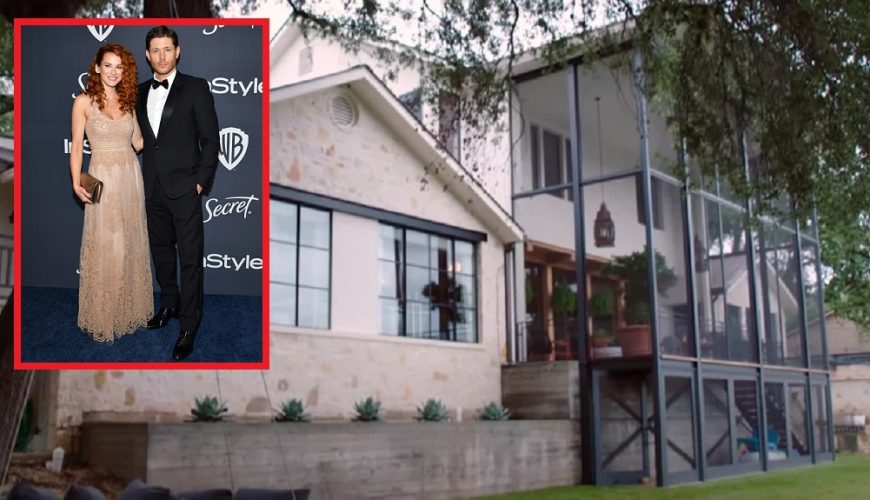 In 2018, Jensen Ackles and his wife Danneel welcomed Architectural Digest into their lakefront home in Austin, Texas. A former soap opera actor, Ackles starred in The CW’s hit show “Supernatural” as Dean Winchester for 15 seasons between 2005 and 2020, per IMDb. Since making it big, he’s lived in a number of cities along the West Coast, but Texas will always be home to the Dallas-born actor.

After living in various homes throughout California, the couple spotted their current five-bedroom lake house while driving through Austin in 2014, per Architectural Digest. Although the home was not on the market, they worked out a deal with the previous owners, who were already thinking about moving, per YouTube. After some remodeling, the stylish 7,500-square-foot family-oriented home now showcases their love of color, music, and the unusual with a poster of Prince in one of their hallways and Venetian dioramas from the 1970s in their living room. The home’s entryway makes a big impression right off the bat. Designed as an outdoor living space by interior designer Fern Santini, it’s bright and warm with lots of plants, a Swedish lantern from the 1820s, and tons of texture (via Architectural Digest). Stepping through the arched front door, you walk right into the sunken living room. Described as an informal space, it’s filled with color and sets the stage for the rest of the house.

Meant to feel like an old lake house, the living room features oak beams on the ceiling that lead your eyes out to the water. Once again filled with texture, the room contains a deep-blue velvet couch, a macrame chair, and a white shag rug. The colorful space also features numerous pieces of artwork that were done by local artists.

Off of the living room is a black walnut bar that’s perfect for entertaining and showcases a variety of liquors, including George Clooney’s Casamigos, per YouTube. Previously the dining room, the couple did away with the formal space as they didn’t use it. The addition of the bar makes even more sense considering that they own a brewery, Family Business Beer Company, according to Forbes.

Screened-in-porch and the great outdoors Steps from the living room, the serene two-story screened-in-porch is the perfect place to watch boats go by. Inspired by Greenwood Plantation in Louisiana, the porch is often used for gatherings and is home to a custom Cypress table that seats 12. Another homage to Danneel’s Louisiana roots, the table was made from a 2,000-year-old log that had been buried on the West Bank of New Orleans, per Architectural Digest.

Back inside, a spiral staircase will take you down to the pool room. The room’s walls and ceiling are covered in wood that the couple brought with them from California. There is also a small prep kitchen, a wine cellar, and a bathroom with a curved door, which was architect Paul Lamb’s idea (via Youtube).

And while their acreage is unknown, their shaded backyard has plenty of space for their young ones to run around. The yard also features a large pool with a raised spa, a bridge, a seating area with a sun sail, and a staircase to the boathouse below.

The kitchen and den

Considered the heart of their home, the kitchen underwent one of the biggest transformations during the renovations. Now featuring a view of the front yard and the lake, the kitchen includes many lower cabinets, top-of-the-line appliances such as the La Cornue range (via YouTube), and plenty of places to eat and lounge.

Up a small flight of stairs is the space that Ackles described as their great room. Serving as a dining room and den, the room is open and airy with white trimmed picture windows, a vaulted ceiling, and a grand double-sided fireplace in the middle of the room. While the space features another 12-person table, the table isn’t the most remarkable piece in the room (via Architectural Digest).

Hanging on the fireplace is a painted bull skull that was done by Texas-born artist Boyd Elder in the 1970s. Part of a 10-piece collection, the skulls have been featured on numerous album covers by The Eagles. The great room also features a gallery wall of posters and photographs from Armadillo World Headquarters, which was where people in Austin went to listen to music in the 60s and 70s. With five bedrooms in the home, Ackles seems to have just enough for a guest, three kids, and him and his wife. The guest room, in particular, is unlike the rest of the house when it comes to color. Despite the room’s moodiness, it still keeps with the home’s overall aesthetic, showcasing knick-knacks and an expansive travel book collection.

As for the kids, they’re just as unique. Ackles’ eight-year-old daughter JJ’s room is playful, girly, and filled with color. Their son Zeppelin’s room is fairly monochromatic, with colorful touches here and there. There are also built-in bookshelves with room to store the wooden trucks that Dannell’s mother made for him, according to YouTube.

While the kitchen is the heart of their home, their favorite room is the master. With a spacious walk-in closet and a bathroom with marble-topped vanities, a metal soaking tub, and a shower inspired by Neil Patrick Harris’s home, it’s no wonder why. The bedroom also includes a focal feature ceiling with hundred-year-old barn wood, walls covered in wallpaper and moving panels, and a sun-room space with access to a private balcony, per Architectural Digest.

My name is Damyan Ivanov and i was born in 1998 in Varna, Bulgaria. Graduated high school in 2016 and since then i'm working on wordpress news websites.
home, House, Jensen Ackles, News, Supernatural, The Boys, TV Series