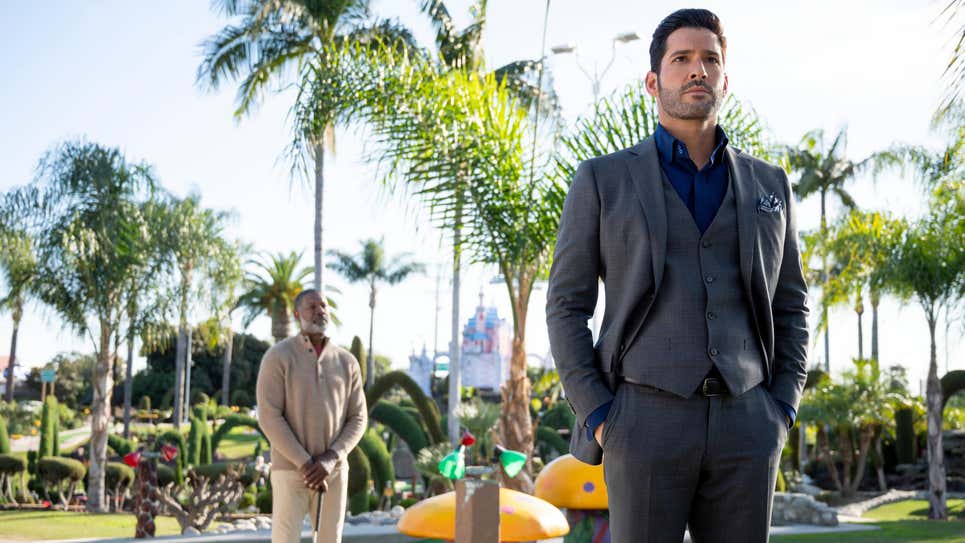 Those were God’s/Dad’s (Dennis Haysbert) first words in his official introduction back in “Spoiler Alert,” Lucifer season five’s midseason finale. They were the words of a parent—as absent and withholding as He’s been—who might just have to turn this universe around if His kids don’t stop their petty fighting. And who could just turn this universe around, which is the scariest part. Now, with the return of Lucifer for the rest of season five, God has a lot more to say—and do.

Written by Lucifer co-showrunner Joe Henderson and directed by Nathan Hope, “Family Dinner” picks up right where “Spoiler Alert” left off, with Dad’s divine intervention putting an end to that episode’s epic Lucifer/Amenadiel vs. Michael (and Maze) fight. In theory, Lucifer has always been leading to a confrontation between Lucifer and the root of all his psychological issues, his (and creation’s) Father. The chances of that ever actually happening when the series was on FOX always felt slim to none, especially as the network appeared to be more interested in the “Cop” side of the “DevilCop” equation than they ever did the “Devil.” (See: Lucifer Season Three.) But even during its time on network television, Lucifer was always its most interesting when it delved into the larger than life origins and issues of its celestial beings, in tandem with the more human aspects of the “Cop” side (Chloe, Dan, and even Ella as people, not just cogs in the procedural machine). It’s why I’d argue that Seasons Two and Four remain the peak of the series, as shining examples of what the series could do in both the network realm and then the streaming one.

Lucifer as a series is essentially a continuous question of “How do you balance work and family?” In this case, the “you” is the Lucifer writers. As I’ve also argued, the procedural component of the show is the weakest—in the sense of the cases-of-the-week as a whole, not the fact that there are cases-of-the-week. With such a big set-piece in this episode—the titular family dinner—it’s rather understandable for the case-of-the-week to be an afterthought. In fact, that’s why Chloe’s near-automatic realization that she should just solve the case based on what Lucifer’s particular projections will be—instead of waiting for him to make those projections on his own, with her doing real detective work—is such a good bit. As is Chloe’s wrap-up line for the case (“So it turns out our killer was an overbearing girlfriend trying to change her boyfriend because he couldn’t deal with his family issues. So, you know, no parallel.”), as Chloe does believe she’s being “overbearing;” even though that’s neither what’s eating at Lucifer this episode nor what’s even on the page, as Chloe’s barely a factor in this episode. (In giving Lucifer space, that does not mean Chloe is also given space to do much more in this episode than work on the case.)

So let’s get into it. Dennis Haysbert is certainly inspired casting for Lucifer’s God/Dad, even if you only know him as “the Allstate Guy.” He’s an actor who has one of those booming “Voice of God” voices that truly makes you feel like you’re in good hands. And as this episode proves, that expected gravitas is there, along with the levity needed to work on this show fully. (Sometimes it doesn’t get much better than God asking about a futon.) But Lucifer has also created a challenge for Haysbert—and itself—as it’s given us a taste of God-but-not-quite with “God Johnson” and “Once Upon A Time.” The latter doesn’t factor in too much, both as one of the series’ bonus, “standalone” episodes and as one that ultimately reveals God’s mindset (in His own words, not Lucifer’s) and that even if things were different, Lucifer and Chloe would still find their way to each other.

But the former does, as even though Timothy Omundson’s Earl “God” Johnson wasn’t the real deal, his behavior was close enough to convince Lucifer and Mom (before they kissed) that he was. And the particular celestial object that he possessed at the time made it so he was as close to the real thing as we had until now. So there is an expectation for there to be a familiarity, in terms of the characterization and performance of the actual God/Dad. And credit where credit’s due, that familiarity very much exists in “Family Dinner,” from the moment Dad calls Lucifer “Samael” (which is what convinced Lucifer about Johnson in the first place). As Lucifer is a show very much concerned with callbacks to and building upon its established mythology and continuity, it’s no surprise the series would want to make sure that its original not-quite-God still makes sense in the context of the real God.

And God’s presence makes for an interesting dynamic with literally everyone He interacts with, whether they know who He is (which is the case for everyone He interacts with here) or not (which should be a possibility moving forward). Obviously, Lucifer, Amenadiel, and Michael all have their own ways in which they behave around Father, based both on the very loaded past and the very stressful present (Lucifer is struggling to connect with Chloe fully; Amenadiel has a newborn, human baby; Michael is a dick). But then you have someone like Linda, who is constantly hit with mindblowing celestial reveal after mindblowing celestial reveal—and takes them all so much better than any other human character—adjusting to the fact that she is part of God’s extended family. Or Maze, who’s obviously aware of God and knows she has to tread carefully when she interacts with him but is also so singularly focused on what she thinks will “fix” her (getting a soul) that she can’t even accept that if God says she’s “perfect” just the way she is, that probably means… Well, she’s perfect, just the way she is.

The God we meet is the Dad we’ve heard so much about, both cryptic and withholding, without seeing why any one of His children could possibly be so mad at him. And while He has the calm grandfather demeanor throughout the episode, He is not as go-with-the-flow as He seems. There’s the storm during the tensest moments of family dinner—a tension which Hope’s direction really makes you feel, right from the early, tight moments of passing plates around the table—but there’s also the fact that He banishes Michael from Earth, which falls exactly in line with what we’ve always been told about Dad. The banishment scene is interesting—and chilling considering the tonal shifts—as it’s also a reminder to Amenadiel of just how extreme Father’s punishments can be. It’s not like Amenadiel is Team Michael, but the way D.B. Woodside reacts to the moment is such that Amenadiel clearly thinks that’s too far, or at least shocking, considering all of Dad’s “family” rhetoric so far. At the same time, this banishment falls right into what Dad and Amenadiel are talking about right before Michael arrives, and that is a father doing anything for his son; in this case, this is what Dad is doing for Lucifer, even if he doesn’t know it.

Like Inbar Lavi as Eve in Season Four, Haysbert’s presence as God/Dad provides fascinating new dynamics for all of the cast to play with. Tom Ellis has always played Lucifer’s fractured relationship with Dad tremendously, and now he gets to do so face-to-face with the actual character. (Ellis is terrific in this episode, especially during family dinner as both Lucifer and Michael.) Woodside gets to show new layers to Amenadiel as a new father and one who both loves and respects his own but can now see Him in a different light. Rachael Harris gets to be the audience proxy once again as Linda reacts to the fact that God is essentially her Father-in-Law, as well as the fact that celestial family drama looks a lot like human family drama. And much like Maze herself, Lesley-Ann Brandt’s onscreen interaction with Haysbert gets to be the wildcard of the episode, as the Maze/God dynamic is one that was perhaps the most difficult one to predict coming into this episode (and now moving forward). Maze has always felt so exclusive to all things Hell that her even interacting with God is clearly a massive deal. And the show knows and plays with that. “Family Dinner” gives us a delicious taste of what things will be like now with God/Dad fully in the mix, apron and all.

While it’s the “overbearing girlfriend” who ends up being the killer, Lucifer is still able to apply the reveal to his “lesson learned” for this episode, in the case of Peter Peterson (John Glover) realizing that the apple didn’t fall too far from the tree when it came to his dead son. In that case, Peterson is given some bit of peace, despite the tragedy that’s befallen his family. At family dinner, Lucifer tells Dad, “[I]f all the apples are bad… maybe it’s the tree that’s the problem.” With Peterson, he sees that the particular apple-tree/father-son metaphor boiled down to “self-sacrifice.” But for Lucifer, that metaphor boils down to—like dear old Dad—being “incapable of love.” To Lucifer, that’s why Dad doesn’t love him or his siblings, and that’s why Lucifer can’t say “I love you” to Chloe. Lucifer takes a major step in accepting that he is his Father’s son in this episode. But in doing so, he also accepts that he is fundamentally broken and unable to give Chloe something she deserves without lying.

My name is Damyan Ivanov and i was born in 1998 in Varna, Bulgaria. Graduated high school in 2016 and since then i'm working on wordpress news websites.
Ildy Modrovich Lucifer, Lucifer, lucifer 5, lucifer 5B, Lucifer season 5b, TV Series