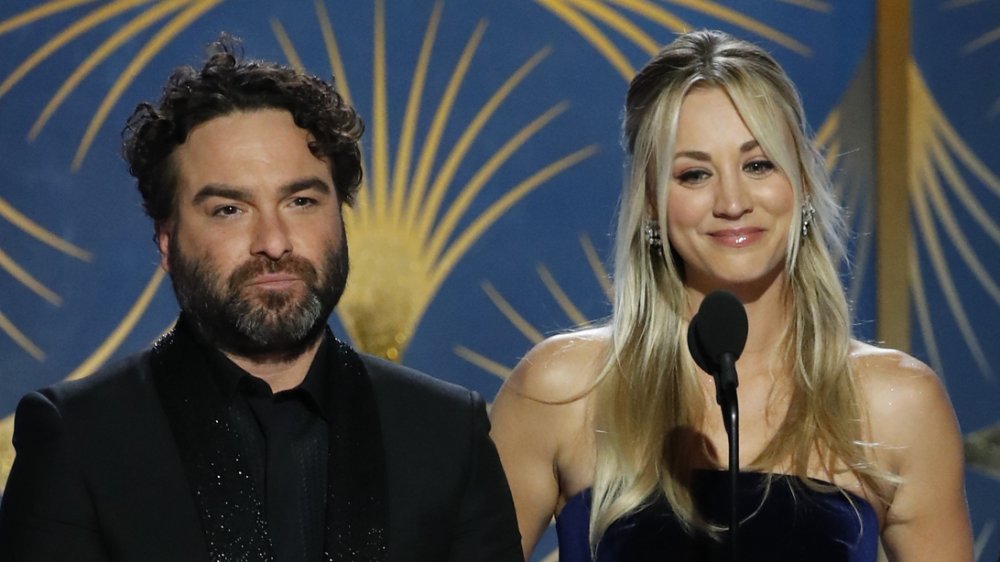 Kaley Cuoco is sharing some big news for her first major role after The Big Bang Theory and is already getting rinsed by her former co-star Johnny Galecki.

Kaley and Johnny starred as dream couple Penny and Leonard Holfstader in The Big Bang Teory before the sitcom came to an end at season 12.

Since then, Johnny’s become a first-time dad and Kaley has been non-stop producing and starring in HBO Max’s upcoming thriller, The Flight Attendant.

The drama – which follows a flight attendant (played by Kaley) who wakes up next to a dead body with zero recollection of how it got there – wrapped up filming last week during an emotional last day that led to the cast getting matching tattoos.

It’s been a long-haul to get here, but Kaley is finally ready to start dropping some big news about the show, with an announcement coming today (October 19) and an Instagram Live following tomorrow.

Speaking on her Cup of Cuoco Instagram series, the 34-year-old told followers: ‘Tomorrow and Tuesday, I am very excited – I will be dropping tonnes of Flight Attendant information.

‘Yeah lots, dropping something tomorrow and some big information on Tuesday and then I think I’m going to do an Instagram live on Tuesday night. I think I’ve only done it twice ever but I thought this would be fun.

‘Once I’ve dropped the exciting info on Tuesday I thought I’ll do one Tuesday night, maybe 7pm EST so 4pm back home if that works for you.

‘I’ll answer some questions and get you all excited for The Flight Attendant premiere, which is just around the corner. I’m really excited for the show, I hope you like it.’

We are truly blessed, but one of Kaley’s followers who won’t be tuning in to her Instagram Live is Johnny.

He commented below: ‘I’m busy Tuesday,’ which was met with a shower of crying laughing emoji from the Penny star.

Their Big Bang bants comes after fans recently noticed which cast members of TBBT don’t follow each other on Instagram.

However, clearly Kaley and Johnny are still as tight as they were during their time on the sitcom.