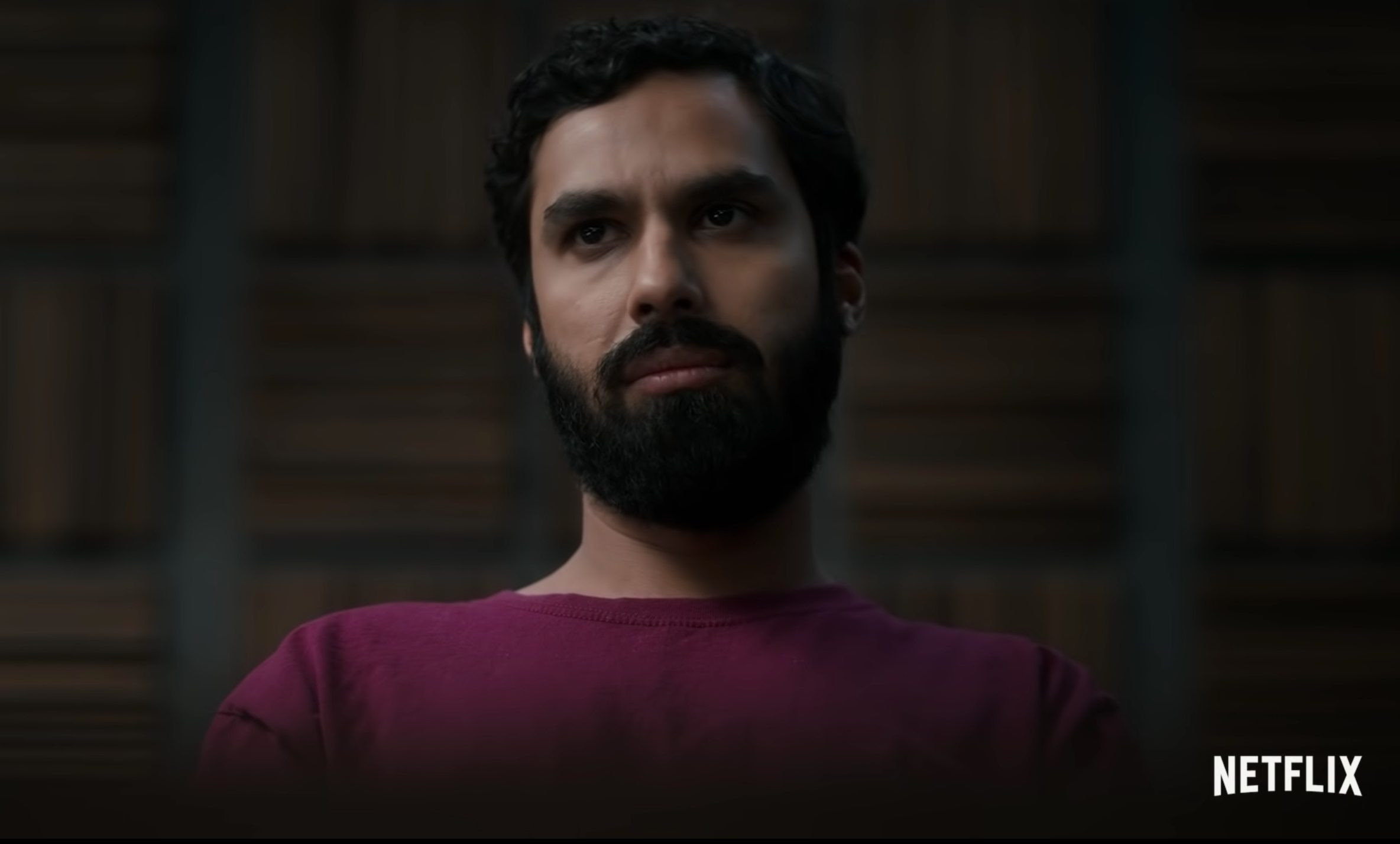 The Big Bang Theory’s Kunal Nayyar is back on our TV screens as the latest suspect in Netflix series, Criminal.

Transforming into cold and calculating killer Sandeep Singh, the actor’s new role is a million miles away from his sweet-natured, dog-loving Raj Koothrappali.

But as he leaves Big Bang firmly in the past, Kunal spoke exclusively to Metro.co.uk about his new, more serious, role, and how he hopes it moves his career beyond the sitcom’s walls.

‘There was definitely [a deliberate decision],’ he said. ‘It was not like, “oh I’m only going to do this kind of work”, but it came at the right time. It was definitely what I wanted to do.

‘Just as I have some mannerisms of this character, but I wanted to make sure that whatever I did next was like, “Wait, who is this? Oh My God. Is that the guy from The Big Bang?!”, as opposed to “Oh there’s Raj, playing a killer”.

‘I hope if there’s anything that can be taken away from this is that that’s what I would have achieved – that the first instance is “wow, they’re so different!”’

Well, he succeeded, and Kunal’s chilling performance earned rave reviews from his Criminal castmates Rochenda Sandall and Shubham Saraf, who pinpointed his portrayal as the biggest standout of the upcoming season.

Surprisingly, it was actually him that reached out for the role, after he fell in love with the previous episodes led by David Tennant, and wanted to try something new.

‘I was in London with the casting director but for another project, and when that meeting ended, as we were walking out, she mentioned “Have you seen this show? There could be a part that I think you would be good for.”

‘I said no I hadn’t, but I came home and I watched it, and right after I was emailing her going “I want it! When is it? How can I be in it?!”

‘The part was already written, and I’m close to this casting director – I’ve worked with her before and she knows my work. She and I had done a play in London with Jesse Eisenberg, All the Spoils, which was a dramatic play, so she knew that I had the ability.

‘People on television have only known me as Raj from Big Bang, But obviously, this person has known me and seen me act in a variety of myriad of other things.’

The new series of Criminal, based almost completely in an interrogation room, will also feature Game Of Thrones’ Kit Harington, Sophie Okonedo, and Catastrophe’s Sharon Horgan, who all take their turn to face detectives in the suspects’ seat.

I wanted to make sure that whatever I did next was like, “Wait, who is this? Oh My God. Is that the guy from The Big Bang?!”
With each episode focusing one suspect at a time, Kunal’s turn in the chair will see him as a hardened criminal who attempts mind games on the team in a bid for early release.

To prepare for the role, Kunal said that he didn’t take influence from notorious criminals – instead, he focused on actual prisoners, and how their time in jail affected them psychologically.

He told us: ‘This character is such a thinker. People who think – who are very, very smart – you never see them just doing this kind of stuff, you know?

‘They’re very still because their mind is working. So there was this real sense of stillness.’

‘One side was the physical side is what jail does to people, physically. And so, predominantly like you don’t see a lot of people in jail sitting like this,’ Kunal explained, slumping over his shoulders.

He then corrected himself to hold himself upright and added: ‘You see a lot of this kind of stuff happening. There’s this real sense of “I’m ready for anything”.

‘So physically I went down that road, and then psychologically I was really trying to just feel like I was still, and able to think completely in the moment.’

Kunal isn’t the only Big Bang star who has made their move over into drama since Big Bang ended in May 2019.

Jim Parsons, who played the neurotic Sheldon Cooper on the show, has landed himself an Emmy nomination for taking on manipulative and abusive talent agent Henry Willson in Ryan Murphy’s Hollywood.

Kaley Cuoco, who starred as Penny, is now taking on a dramatic turn as a air hostess trapped in the middle of a murder mystery in upcoming series, The Flight Attendant.

Criminal is only the start for Kunal too, with thriller Suspicion, starring Uma Thurman, currently due to go back into production in October, following a halt in production due to coronavirus.

Advertisement
But he’s not ruling out the potential of returning to comedy some day, with his rule for any upcoming roles being simple: He’s got to enjoy it.

‘I love acting. I love the craft of acting, and I want to explore things that I enjoy doing,’ he told us. ‘I’d been doing one thing for so long, and I love multi-camera shows [like Big Bang].

‘I love being in front of a live audience – it was like doing a play for 12 years with some of the best acting and directing and writing that you could ever imagine on television!’

‘For me now, it’s just the time to really just do what it is that I want to do, completely based on whatever it is,’ he concluded.

‘I want to explore these characters and enjoy doing it.’