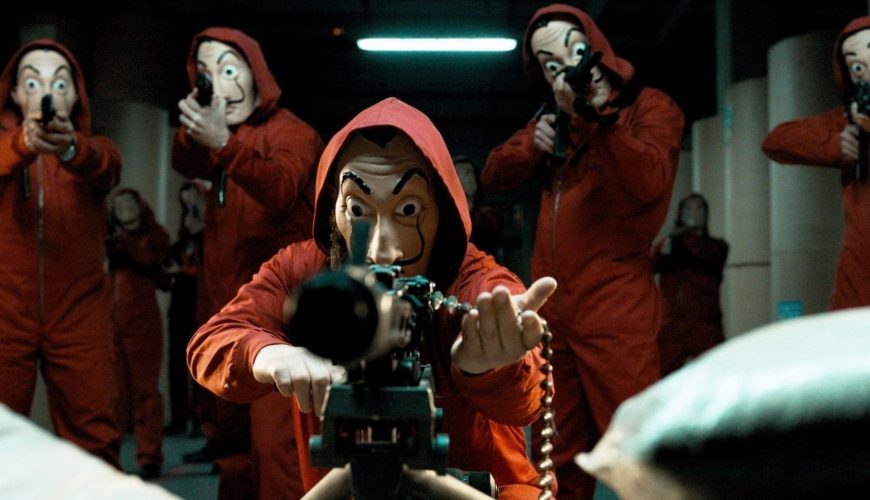 The Spanish series, Money Heist (Spanish name: La casa de papel) concluded in December 2021. Ahead of the show’s final season, Netflix made two big announcements about the future of the Money Heist franchise. There will be a spinoff show and a South Korean adaption of the world-famous Spanish drama.

Here’s every detail on both the upcoming Money Heist spin-off series.

In November 2021, Netflix announced that it will create a spin-off series titled Berlin, which is set to be released in 2023. Netflix has been silent on the storyline of Money Heist Berlin.

On November 30, Pedro Alonso, who plays Berlin, revealed something about the show in front of 5,000 fans at a Q&A event in Madrid’s Palacio Vistalegre. He told TV Line, “I am deeply grateful to be able to connect with people all over the world and receive so much love and such a memorable time.”

Berlin is one of the most vital characters in the drama. He is a terminally ill jewel thief and Professor’s second-in-command and brother. Berlin was dead in the original series. In Money Heist part 1, the police found that Berlin’s real name is Andrés de Fonollosa and that he was terminally ill. Meanwhile, he starts a coercive relationship with a hostage named Ariadna. In the final minutes of part 2, Berlin sacrifices himself so that the gang can escape, dying under police fire.

Despite his death, he appears in the main role in part 3 of Money Heist through flashbacks to several years earlier, showing his original planning of the Bank of Spain heist and being married to a woman named Tatiana. Berlin is seen to be proficient in many languages including Danish, English, Italian and Portuguese.

Fans will be interested to see how the creators approach the show due to the fact that Berlin is dead. Berlin will be seen as misogynistic and psychopathic, something which Pedro Alonso and show creator Alex Pina discussed in the Netflix documentary Money Heist: The Phenomenon (released on April 3, 2020, on the same day Money Heist Part 4 was released)

He also mentioned, “If we had known that there would be more seasons, we would have thought hard about killing Berlin. It is that he died a lot. We killed him too much and there is no way to revive him.”

During the play, actor Pedro Alonso described Berlin as “cruel, heroic, and funny at the same time” and saw Berlin’s high observational skills and an unusual understanding of his surroundings, resulting in unconventional and unpredictable character behavior.

There is also gossip that if the spinoff Berlin goes well, Netflix may come with other characters spinoff, such as ‘Tokyo’ from Money Heist.

There will be a spinoff show which is already underdeveloped. The Korean adaptation of Money Heist is being directed by Kim Hong Sun and will be collaboratively made by BH Entertainment and Content Zium.

In January 2022, Netflix confirmed that the remake will be titled Money Heist Korea: Joint Economic Area. Possibly the production of the adaptation series has been delayed by the COVID-19 pandemic in South Korea.

Netflix has unveiled more details on the Korean adaption Spanish crime drama, Money Heist in a special teaser video this week. This includes the title of the new show during Netflix’s Tudum event.

Money Heist: Korea – Joint Economic Area is expected to feature 12 episodes. During the announcement, the upcoming series promises to breathe new life to the original plot. There will be a new style of robbery and action “set on the Korean Peninsula.”

In a press statement, Money Heist creator and executive producer ÁlexPina expressed his excitement over the Korean remake. “Korean creators have been developing their own language and audiovisual culture for years,” he said. “They have managed, like our series, to go beyond cultural borders and become a point of reference for thousands of viewers around the world, especially among young people.”

“That is why I find it fascinating that the world of La Casa De Papel is so attractive to Korean creators as to do an adaptation,” Pina added. “The fact that the action is set on the Korean Peninsula also seems to me to be a milestone which I am really delighted about.”