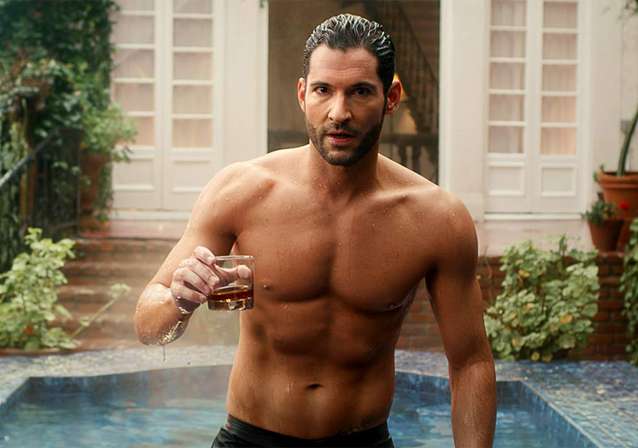 It has been a great week to be a fan of Netflix’s Lucifer. The show has a return date (August 21), and Netflix officially announced that it had been renewed for a sixth and final season. Yes, the streamer finally confirmed that last point. How is Tom Ellis staying fit during quarantine to play the title character in Season 6?

When gyms were open pre-quarantine and before television productions shut down, Tom Ellis showed off staying in shape, and shared some of his experience training for Lucifer’s soon-to-be-released season. It looked exhausting! But, did it make him happy? When asked what exercise makes him feel happiest by Men’s Health, Ellis said:

The exercise that makes me feel happiest? A bit of a weird question, ’cause doing exercises themselves never makes me feel that happy in the moment, but I always feel elated after I’ve finished. When the gym was open, I like to do chest press and big muscle groups around the shoulders and chest. So, in lockdown I’ve been doing a lot of push-ups and push-up variations, and get into grips with my chins. That’s my new target, being good at chins this year. I’m gonna come out of quarantine with a big chin.

Fans could have a big chin to revel in when Lucifer returns for Season 6. A sign that just because television has been on pause does not mean Tom Ellis has taken a break from the workouts in lockdown. He signed on for the sixth season last month, so Ellis had a heads up about staying in shape.

The Lucifer star revealed that push-ups and their varying iterations have been a core part of his regime. Hence, a lot of apparent chin action. Fans of the Netflix series do not have too much longer to wait before seeing what the state of Tom Ellis’ chin is in Season 5. It will be split into two halves and span more episodes than initially planned, so get excited.

Netflix also has Season 6 on the way, thanks to, apparently, resolving that behind-the-scenes issue. Of course, production on that cannot happen until television starts lifting those quarantine restrictions. Kudos to Tom Ellis for working to stay in shape without the benefit of visiting a gym. I could not blame him for enjoying some downtime from his regular routine.

When you know that fans have fought as hard for Season 6 as they have, it makes sense for Tom Ellis to want to make it worth their while. Remember, Lucifer’s upcoming season was supposed to be the last one. Considering all of the clothes shedding that Lucifer has done in the past, Ellis probably wants to remain in top shape for Season 6.

In Lucifer’s first Netflix season, there was a nudist colony, and Tom Ellis’ title character was all up in it. Staying in shape has been a pretty consistent theme during Ellis’ time on the supernatural drama. Ahead of the fourth season, Ellis showed off the state of his body in a shirtless Instagram post.

Fans are undoubtedly grateful for Tom Ellis’ hard work. Until Season 6 (or 5 for that matter) arrives, you can stream the first four seasons of Lucifer on Netflix. The first half of Season 5 will premiere August 21 on Netflix as one of its 2020 premieres. While you wait for the supernatural drama to return, check out what summer’s schedule has in store.