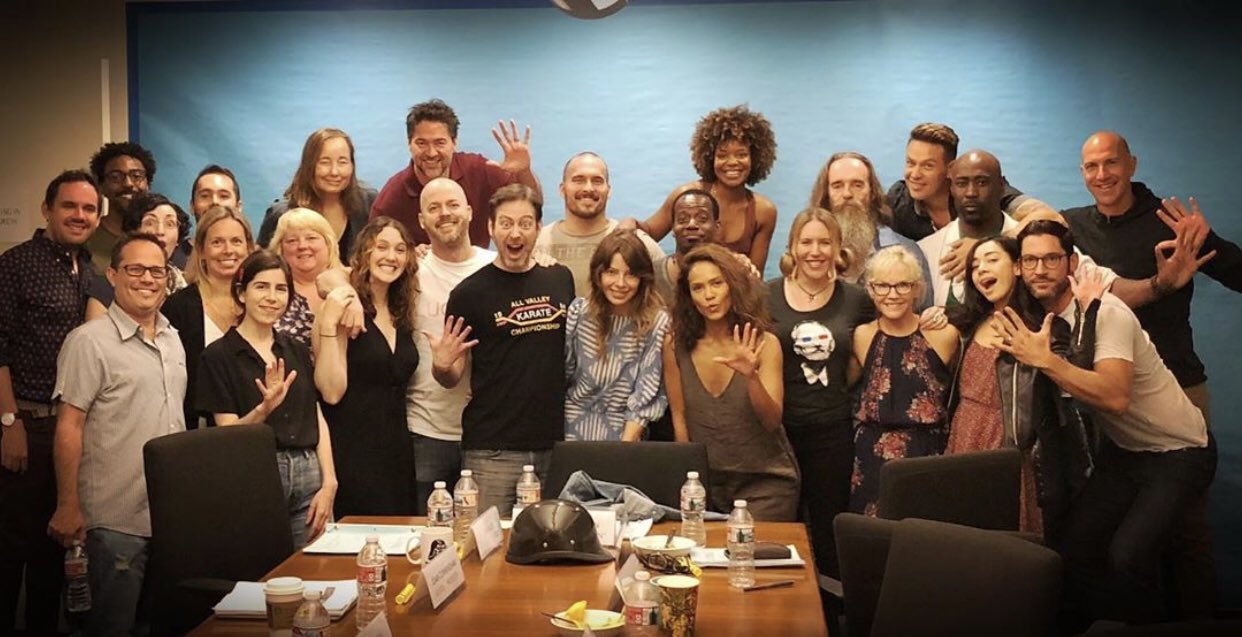 Lucifer season 5 part 2 is just around the corner with Netflix finally setting a release date for late May 2021. Here’s an updated guide to everything we know so far about the penultimate season of Lucifer in the form of season 5b.

As you’re all probably aware, Lucifer has become one of Netflix’s biggest Original series having been picked up from Fox after its abrupt cancelation. Netflix has taken over the production since season three, with season 4 dropping on May 8th, 2019, and the most recent season arriving on August 21st, 2020.

We’ve already got lots of coverage for season 5 of Lucifer including the complete soundtrack guide for the new series. We also reported that Lucifer had the biggest TV debut on Netflix since the introduction of the top 10 feature on Netflix globally in early 2020. That was further reflected in Neilsen viewing figures.

When will Season 5B of Lucifer? be on Netflix?

After a very long production process (thanks to COVID-19 – more on this below), we’ve perhaps waited much longer than we would’ve hoped for season 5 part 2.

Thanks to an update on the Lucifer Netflix page, we now know that season 5b on Lucifer will release on Netflix worldwide on May 28th, 2021. 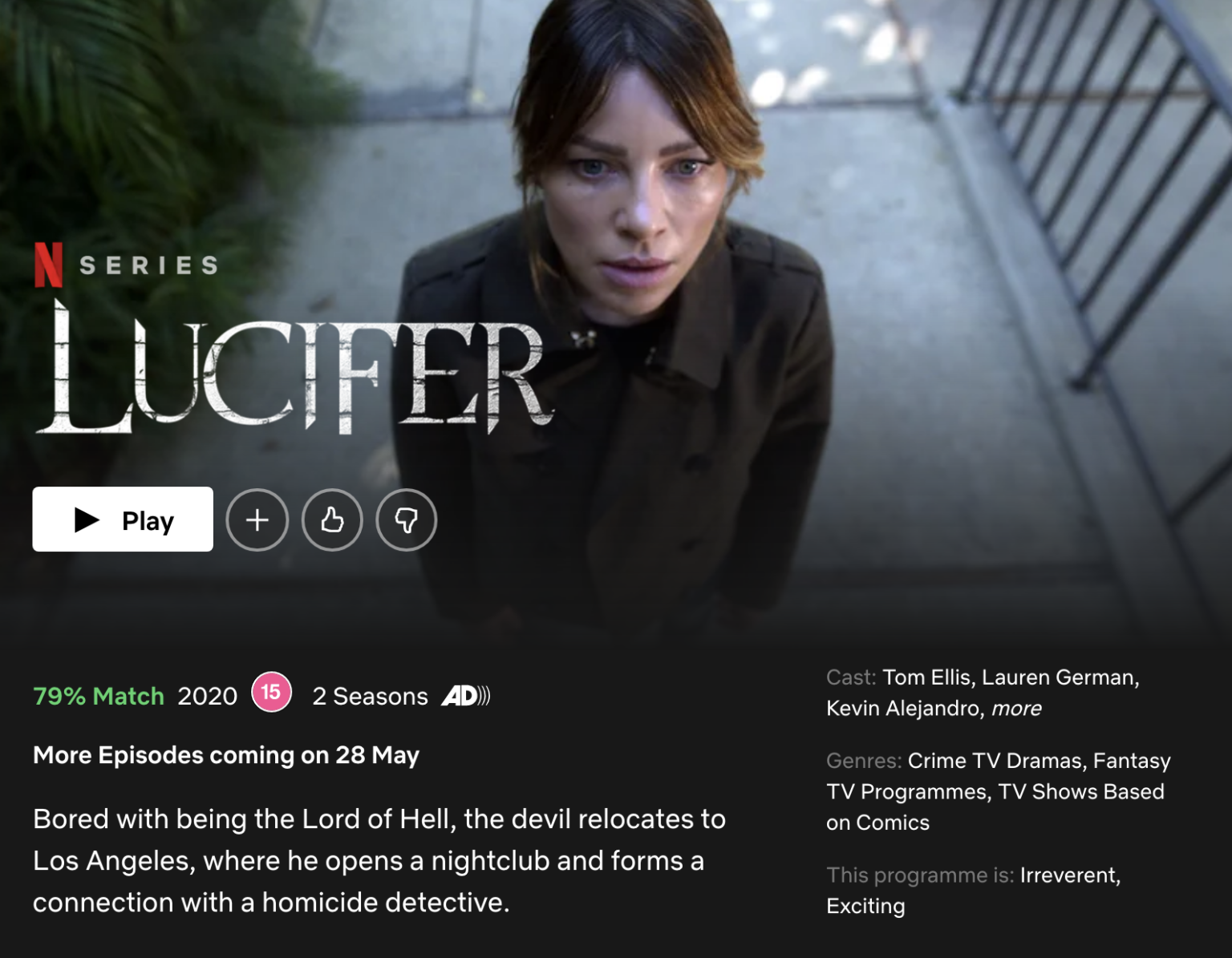 It’s worth noting that the episode titles were announced up until March 12th, 2020 which is before the renewal of Lucifer season 6 so we’re not yet sure whether any episode titles will change but we have no doubt that it will affect the meat of the final episode as we’ll move onto in a just a second.

Where is Lucifer season 5 part 2 in production?

Most of part two has already been filmed. In fact, up until the pause of due to the global pandemic, it is believed every episode up until episode 16 had been filmed. That was later contradicted by Tom Ellis who said “We were about halfway through it. So we go back, we start with that, and then we go straight into season 6.”

In late June 2020, we got word that production on Lucifer season 5 part 2 had been rescheduled to start at some point in October 2020. That date was seemingly brought forward when TVLine confirmed in early September 2020 that the series was currently eying a return to production on September 24th, 2020.

Lucifer filming DAY 1 with testing and six feet away social distancing. Rachael, Aimee, Kevin and DB on set. I’M SO EXCITED! Thank you so much @Aimee_Garcia for giving us these updates!! Stay safe. pic.twitter.com/AyB5NVkB5I

You can also see Tom Ellis sporting his new face mask on set thanks to a screenshot of a video call. 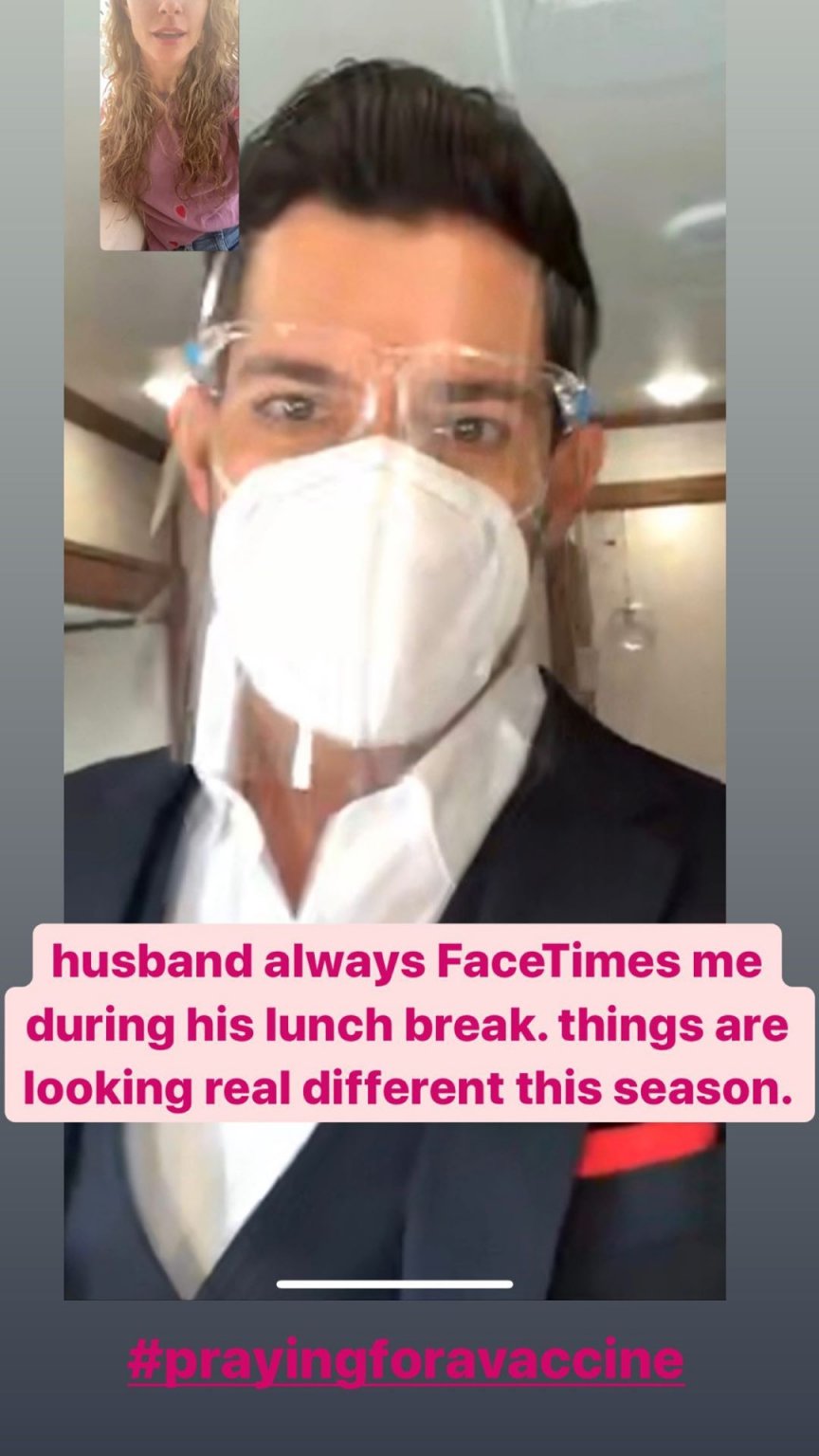 It’s also thought there’s set to be some reshoots given the dramatic renewal of season six and the plot changes needed to keep the series going.

Throughout the filming return, we got to see some shots of what we can expect with two massive cranes set up in a football stadium being one of the biggest teases. Could this be the showdown between Luci and Michael? 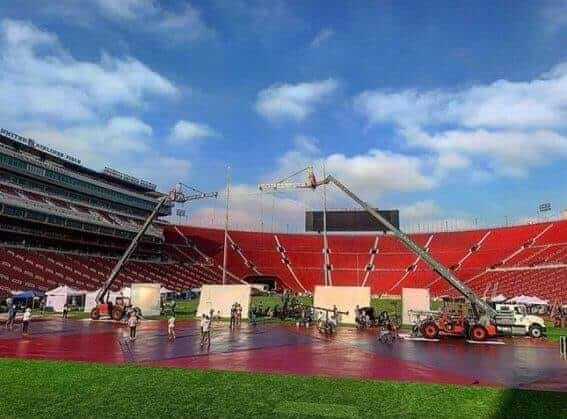 As of October 2020, production had shifted to season six of Lucifer which is being filmed back-to-back.

That means the series is in deep post-production which was confirmed on October 25th at the Baltimore Comic-Con live event. Joe Henderson when asked about post-production said that “it’s coming well”. He also stated that all episodes up to season 5 episode 16 have finished with post-production with just the finale to be done. He also states that 516 is going to take longer just because of how big the episode saying that it’s “very expensive.”

He also states that a lot of the wait now is for Netflix to do cleanup on their end with localization as well as prepping marketing materials and things like that.

There was plenty more revealed in the whole talk between Joe Henderson at the comic-con which ran for two hours in total. Full video below.

On January 2nd, 2021 Ildy Modrovich provided a small update on where season 5 part 2 was at saying that they’re still working on VFX and dubbing. 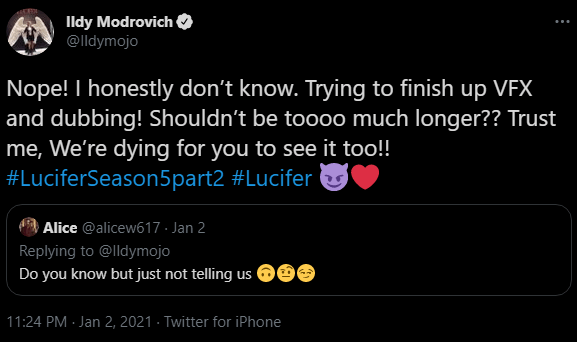 For Thanksgiving 2020, we did get a special fan cam for Chloe but more importantly, included a few frames of new footage towards the end.

thankful for chloe decker today and every day, so we made a fancam to show how much we stan pic.twitter.com/RIs7rgGzYc

So far, we know of a number of guest stars set to feature in part two.

Of course, the main star who featured right at the end of episode eight will be continuing his appearance into the second half. We’re referring to Dennis Haysbert who plays the role of God with his inclusion in the series being announced back in January 2020.

In May 2020, we learned first that Alison McAtee who is known for her work on The Haves and the Have Nots on OWN and Californication would guest star as Elizabeth Newman in episode 14.

Allison McAtee (@AllisonMcAtee) has been attached to play the role of Elizabeth Newman. pic.twitter.com/ZPXCh6TT4p

We also got the news in September 2020 that Catherine Dent who is most known for her time on The Shield on FX in the early 2000s as Dannie Sofer will appear in the musical episode as Dr. Alice Porter.

Catherine Dent (@catherinedent) known for her roles in The Shield, The Majestic, and Silk will appear in Lucifer season 5 part 2 as Dr. Alice Porter. pic.twitter.com/WCTGoTBQ0J

In early September 2020, we got word of another new guest star in the form of Teri Reeves who has featured in Netflix’s The Punisher, Once Upon a Time, and Chicago Fire.

In late September 2020, Netflix Life caught wind that Scott Porter (who has featured in Speed Racer, Prom Night and Ginny & Georgia) would be featuring in a currently unnamed role for the second half of season 5, plus he’ll also be featured in season six too suggesting he’s a new recurring character.

The fansite goes onto speculate that he could play Castiel who has been long rumored to enter the series at some point.

Why am I wearing a #Lucifer hat, grinnin like a fool, #Lucifans? 2 reasons.

2: My old friend, Luci himself, Tom Ellis is auctioning off a fan Zoom call to raise $ for #HuntingtonsDisease!

Here’s a few other guest stars set to appear in the final episodes of Lucifer season 5:

Inbar Lavi will be returning as Eve for season 5 part 2 as confirmed by Entertainment Weekly.

What to expect from Lucifer season 5 part 2

Let’s quickly catch up on the final events of episode eight, “Spoiler Alert”.

The episode ends in an epic double showdown with Lucifer fighting Maze, and Amenadiel fighting the new villain of the series, Michael (Lucifer’s twin brother). That fight ultimately concludes with lights beaming into the office building and God standing at the top of the stairs.

God exclaims “That’s enough” before calmly saying: “Children, I know I hate it when you fight” and then cut to credits.

God is expected to be sticking with Lucifer for a while too. On November 23rd, the Lucifer Twitter account teased a cryptic clue about what we can expect from season 5 which said:

when could the release date of 5B possibly be? we can’t reveal that but what we can reveal: get ready for ***’s extended stay on *****

Most fans worked this out to be “God’s extended stay on Earth”.
We’re still yet to see what Michael’s endgame or ultimate plan is telling Lucifer “Oh, you’ll just have to wait and see.”. Some have speculated that if the series sticks to its comic book origins, it could eventually lead to the creation of what we now know is the DC Universe.

We do know some other things about season 5 part 2 including the fact we may get to see Maze’s (played by Lesley-Ann Brandt) demon face with her telling an outlet: “I have a great scene in the back half of the season with Dennis and it’s incredibly… Well, you get to see my demon face in that scene, I think I can drop that in there!”.

It’s also been teased that season 5 part 2 will be the most emotional yet.

What we know about the musical episode of Lucifer season 5b

On September 12th, 2020, Lucifer was one of the shows that featured in part two of the DC Fandome event.

Here’s what was touted as to what you can expect from the Lucifer panel:

“Lucifer is back from Hell, and the series is bringing a never-before-seen blooper reel from season 4 along with an exclusive clip of “Another One Bites the Dust” from the upcoming musical episode. Director Sherwin Shilati and Lucifer executive producers/showrunners Joe Henderson and Ildy Modrovich discuss what it took to put together such a massive musical episode — and how they have been able to keep it under wraps for so long.”

In the panel, the creators spoke about the final season as well as dropping the first glimpse at the new season with a new clip from the new musical episode.

And just before we go, we thought we’d show you some of the colorized versions of the black and white episode which look just as fabulous.

That’s all we know for now, as per our other previews here at What’s on Netflix, this is going to get updated over time as and when we learn more information.

Are you looking forward to the next batch of Lucifer season 5? Let us know in the comments down below.