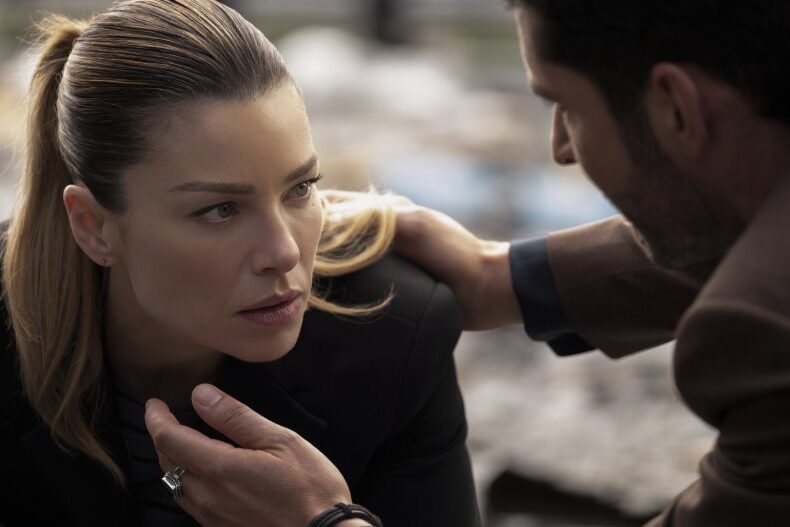 After six months of waiting, Lucifer season five, part two is finally available to stream and download via Netflix.

The 16th episode in what was was supposed to the final series saw Chloe Decker (played by Lauren German) die at the hands of Lucifer’s (Tom Ellis) evil twin brother Michael.

Is Chloe Decker Now Immortal?
Deckerstar fans held their breath as Chloe Decker was bludgeoned in the stomach with the Tree of Life by Lucifer’s power-hungry twin Michael.

Sadly, Chloe died from her injuries and was later seen in heaven, reunited with her father John Decker (Russell Simpson).

Lucifer decided to risk his own life by venturing up to heaven to deliver Chloe back to Earth. In an emotional embrace, Lucifer finally told Chloe he loved her and his body was engulfed in flames.

He also slid Lilith’s ring of immortality onto Chloe’s wedding finger before he succumbed to the fire.

Thankfully, Lucifer season five, part two had a happy ending, if you forget about the death of Detective Dan Espinoza (Kevin Alejandro) for a moment.

Lucifer somehow managed to return to Earth and took on the mantle of God, setting up the events of the sixth and final series.

On the other hand, an injured Chloe managed to awake from her unconsciousness and fight back against Michael.

Deckerstar fans have been questioning online the significance of Chloe’s return to Earth, the immortality ring, and Lucifer’s status as God going forward.

Some Lucifer fans are sceptical about Chloe’s state of immortality. This is because just how much power is left in Lilith’s ring is unknown.

Lucifer used Lilith’s ring to travel to heaven and send Chloe back down to Earth, so whether there is enough power left to let Chloe live an immortal life is unknown as of now.

One Lucifer fan on Reddit, Ljmcgown explained: She’s not immortal. Just enough juice left in the ring to get her back to earth. “The rest was spent keeping Lucifer alive.”

A second fan, letmepick, added: “I still think she may have a couple of thousand years of juice left. Judging based on the fact that Lucifer was beginning to burn up while still holding the ring in Heaven, and the fact that he said the ring had *just enough* juice to get her soul back to Earth, we can pretty much assume that’s not Chloe’s ticket to immortality.”

One Lucifer fan, _Corvus_ delved into the further, suggesting Chloe was the tree of life “personified.”

They wrote: “She’s now the tree of life personified? That stick was the last bit of it left and she was stabbed with it, *and* came back. She could be the new goddess?”

There is also the possibility the fact Chloe was stabbed by the Tree of Life could symbolise there is a Deckerstar baby on the way.

However, with a baby on the cards, Chloe may want to live forever with Lucifer and see their child grow old.

In the other hand, Chloe may want to lead a mortal life on Earth with their child and her and Dan’s daughter, Trixie (Scarlett Estevaz).

Fans will have to wait until Lucifer season six arrives on Netflix to find out exactly what is in store for Detective Chloe Decker.

My name is Damyan Ivanov and i was born in 1998 in Varna, Bulgaria. Graduated high school in 2016 and since then i'm working on wordpress news websites.
Chloe Decker, Lauren German, Lucifer, Lucifer 6, Lucifer Season 6, News, Tom Ellis, TV Series