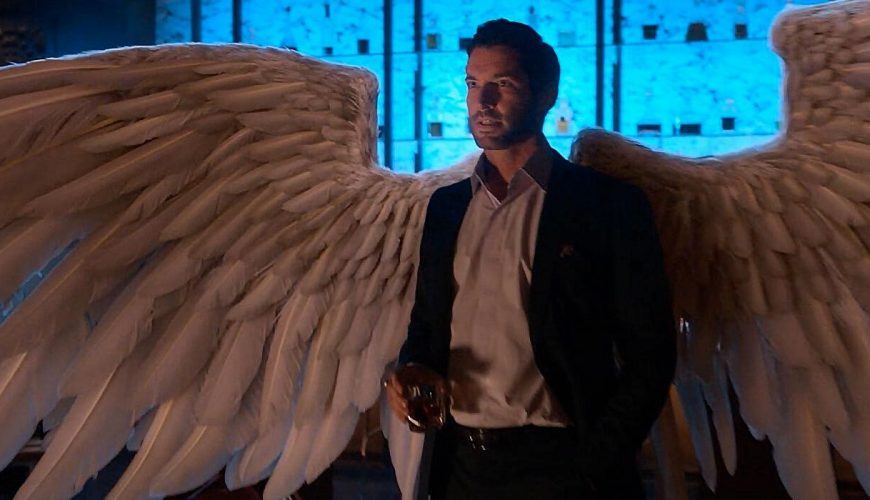 Lucifer star Tom Ellis has his hands full in a new photo from behind the scenes of the show’s sixth season.

He’s carrying co-star Lauren German in his arms while suspended from a rig against an open sky backdrop, which indicates that the scene being filmed is all but guaranteed to have a pair of feathery white wings added in post-production.

Ellis posted the photo to his Instagram, with credit to the photographer, set costumer Joshua Coleman.

Ellis added the remark, “Just hanging around waiting!” along with a countdown to the release of Season 6 on Netflix, while Coleman had some production trivia about the moment to share, in addition to a second view of the shot.

“Fun fact: I have to use a plastic tagging gun to temporarily staple Tom’s jacket to his vest so that it doesn’t open too wide on camera,” Coleman wrote. “He is currently wearing a T-shirt, a harness, another t-shirt over the harness, a purple collared shirt, his vest (waistcoat) and his blazer. The cables are clipped in to his harness, which means that I had to cut holes in his tshirt, the vest and his blazer. The 1st first T-shirt is just for comfort because a harness on bare skin can rub and hurt your skin.”

Coleman also had some more lighthearted observations about the dangling actors: “Caption 1: @officialtomellis is really good at picking up women. Caption 2: Tom and laurengerman love to get high!”

Although 60 still images of the upcoming Lucifer season were recently released, the scene being filmed doesn’t appear to correspond to any of them, so fans can generate some more speculation about where and why Ellis’ Lucifer is flying with German’s character, his mortal love Chloe.

Lucifer’s Season 6 release date, Sep. 10, was announced during the show’s Comic-Con@Home panel, along with a short clip that provided a peek at the ex-Devil’s life in the wake of the major changes he and the world went through at the end of Season 5.

Starring Tom Ellis as Lucifer Morningstar, Lauren German as Det. Chloe Decker, D.B. Woodside as the angel Amenadiel, and Lesley-Ann Brandt as the demon Mazikeen, Lucifer is based on the comic series of the same name. The story follows the Devil on a vacation from ruling Hell as he attempts to understand humanity and his place in it.

My name is Damyan Ivanov and i was born in 1998 in Varna, Bulgaria. Graduated high school in 2016 and since then i'm working on wordpress news websites.
Behind the scenes, BTS, Lucifer, Lucifer 6, Lucifer finale, Lucifer Season 6, News, photo, Tom Ellis, TV Series