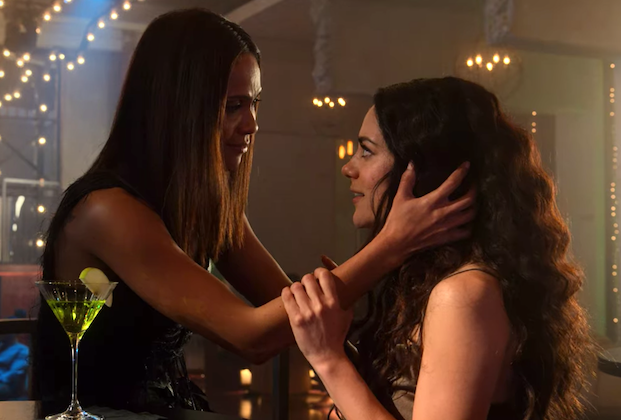 Lucifer star Lesley-Ann Brandt has given fans a glimpse of what’s in store for Maze and Eve in the new season.

Set to debut on Netflix in September, the sixth and final chapter in Lucifer Morningstar’s (Tom Ellis) story will see some interesting developments for his biggest ally, demon and confidante Mazikeen aka Maze.

Brandt took to Twitter to share a behind the scenes picture of her character Maze kissing Eve, played by Israeli actress Inbar Lavi.

“Definitely not ready,” Brandt captioned the shot where her character shows off some real multitasking skills.

Maze, in fact, isn’t just involved in a passionate kiss with her mortal girlfriend, but she’s also on the phone and restraining a man by, quite literally, stepping on him.

“THIS MAN IS LIVING THE DREAM,” one Lucifer lover wrote, adding a hilarious zoomed in picture of the man Maze is restraining.

The new season will also see Lucifer finally taking Chloe (Lauren German) to fly with him. According to a spectacular stunt picture shared by Ellis earlier this month, the pair seem to finally be ready to take to the sky together.

My name is Damyan Ivanov and i was born in 1998 in Varna, Bulgaria. Graduated high school in 2016 and since then i'm working on wordpress news websites.
Behind the scenes, BTS, Lesley-Ann Brandt, Lucifer, Lucifer 6, Lucifer finale, Lucifer Season 6, News, photo, TV Series