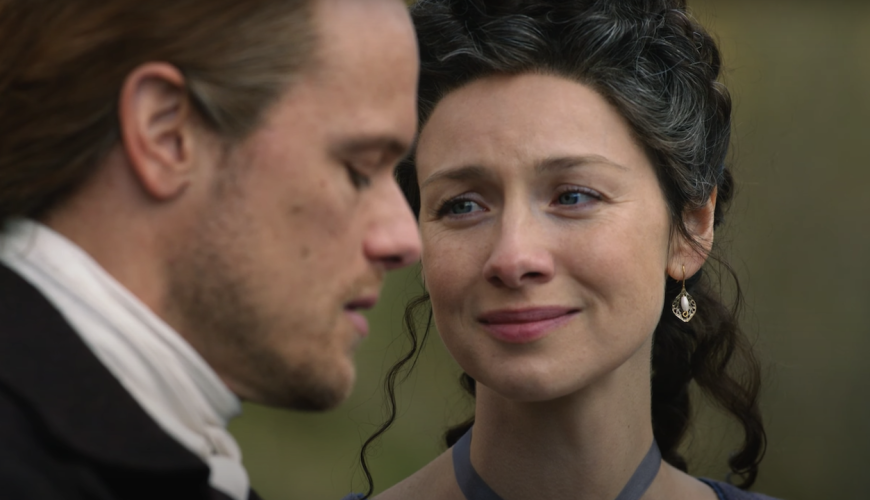 Well, Sassenachs, we are now so close to the end of our Droughtlander, with Outlander Season 6 finally set to return to Starz in early March. But, if you also happen to be a fan of author Diana Gabaldon’s books (which set this whole Outlander craze off back in 1991), your wait ended toward the end of November, when she released the ninth book in the long-running saga of Claire and Jamie Fraser, titled Go Tell the Bees That I Am Gone. With Gabaldon’s novels being well ahead of the TV show, though, she’s now reassured everyone that Sam Heughan’s Jamie doesn’t die in the new book…But, what about Caitríona Balfe’s Claire?

Anyone who’s watched just a few episodes of Outlander, or only read even one of Diana Gabaldon’s books, will know that a lot has been thrown at both Claire and Jamie over the course of their many decades together. While the two have always been able to persevere through trauma, and even find their way back to one another when separated by great distances or even centuries, with each of them now getting rather long in the tooth for adventures in the 1700s, and more dangerous times coming, the question of when and how they die is one that fans can’t help but puzzle over.

Gabaldon recently joined Sam Heughan and Outlander executive producer Maril Davis to talk about Go Tell the Bees That I Am Gone, and after confirming Jamie doesn’t die in her new book, was specifically asked by Davis about Claire, to which Gabaldon said:

No, I never said she wouldn’t die, did I? But, a lot of things happen to her in this book, as well as to Jamie.

Phtttphttppp. Wow. OK, folks…Let’s not panic just yet. Gabaldon might not be willing to confirm or deny that Claire makes it out of Book 10 alive, but haven’t we seen our beloved Claire Beauchamp Randall Fraser get out of a number of scrapes with her medically-inclined soul still very much attached to her body? I know it seems odd that the author likes to make a point of telling us that Jamie is safe, while letting us believe that she might play fast and loose with Claire’s life (more than usual, anyway) this time around, but I think it’s unlikely that such an event would occur before the end of her series.

She also noted that there are many options for who will end up being “gone” by the end of the novel, saying that there are over 360 characters in Go Tell the Bees That I Am Gone. And, my bet is on several of them dying long before La Dame Blanche. Later in the conversation with Sam Heughan and Maril Davis, Diana Gabaldon herself kinda gave that away. When asked if she still plans to end the Outlander series at Book 10, Gabaldon said:

Well, it depends on Jamie and Claire. If they’re not ready to die yet then I guess I’ll have to go on…That’s the other thing, I do write novellas that fill in blanks in the series. So, I can always go out and then come back again; by a different door, so to speak.

See? It’s all cool for now, Sassenachs! Jamie’s alive. Claire’s alive. And, even if one or both of our heroes do expire by the end of Book 10 (which Gabaldon has already started on), that doesn’t necessarily mean it’s the complete end to their sexy adventure.

Outlander’s shortened Season 6 debuts on March 6, 2022, but for more to watch, check out what other upcoming romantic TV shows are coming along soon!

My name is Damyan Ivanov and i was born in 1998 in Varna, Bulgaria. Graduated high school in 2016 and since then i'm working on wordpress news websites.
Claire Fraser, Jamie Fraser, News, outlander, Sam Heughan, TV Series