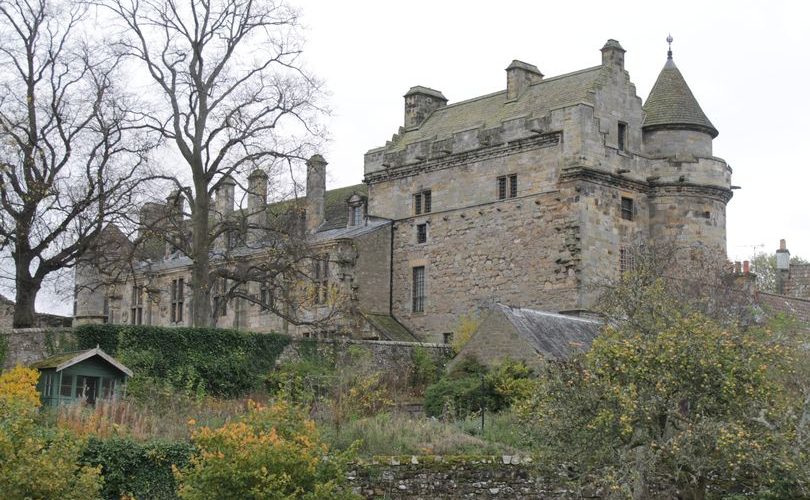 Many Outlander fans will already know the picturesque village in Fife used to double as 1940s Inverness in season one but did you know that the beautiful Falkland Palace its home to also played its part?

The famous building was once a palace for the Scottish royal family and has a rich history connected to iconic figures from Scotland’s past such as Mary Queen of Scots.

A favourite place for the Queen to visit, the palace was built in Falkland in the 1500s by the Stuarts and accommodated the royal court when they came to the area to hunt in the nearby forests.

It remained part of the Royal holds until it was taken by Oliver Cromwell’s troops in the 1650s and badly damaged in a subsequent fire.

Over the years it fell into neglect until the buildings were eventually partially restored by the Marquis of Bute who inherited the lands in the late 19th century.

It is now run by the National Trust for Scotland (NTS) and is considered to be one of the finest surviving examples of Renaissance architecture in Scotland.

The palace can also lay claim to being the home of the oldest real tennis court in the world still in use today.

Built for James V of Scotland, the father of Mary Queen of Scots, in 1538, after he spent time playing the game in France with his then-wife, the King of France’s daughter.

Outlander filming
The Palace was used in season two, with one cellar room doubling as an apothecary’s room for filming in season 2’s ‘The Hail Mary’ episode where Claire seeks medical supplies.

Tourism
Now run and maintained by the NTS, Falkland Palace and the Estate are usually open to visitors all year round.

A fun augmented reality app ‘In the Footsteps of Kings’ can be used at both Falkland Palace and Falkland Estate, and brings the rich history of the area to life.

The NTS has also maintained the Apothecary as an interactive exhibit, meaning you can actually see some of the treatments Claire would have been forced to use in those times to treat ailments.