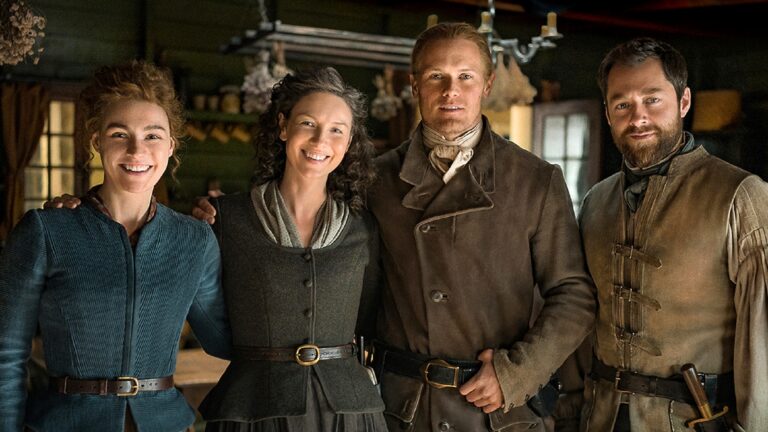 Outlander boss Matthew B Roberts has revealed some of the main benefits to having an extended run of episodes when the historical drama returns for its highly anticipated seventh season.

Claire Fraser (played by Caitriona Balfe) and her husband Jamie (Sam Heughan) took on several threats to their home on Fraser’s Ridge in the latest season of Outlander, and the battle has not yet been won. After the hit Starz drama based on the bestselling series by Diana Gabaldon was forced to cut itself short this year, writer and producer Matthew B Roberts has assured fans there’s much more to come from their favourite characters.

The seventh season of Outlander will undergo some major changes due to its extended run time.

Having cut the sixth season nearly in half due to Covid restrictions, Starz wasted no time promising fans a bumper seventh outing to make up for this year’s lower episode count.

Starz’s hit fantasy drama will double this year’s offering, bringing next season’s total up to a staggering 16 episodes.

Executive producer Matthew has since reflected on how the extended season has helped space out his plans for Outlander’s main characters.

“In season seven we’ve already spread things out,” he explained.

Cutting the story short meant Starz’s adaptation still hasn’t wrapped up the events of Diana’s sixth book in the Outlander saga, A Breath of Snow and Ashes.

Once Jamie has reunited with Claire and returned to the Ridge, there’s still the small matter of the American Revolution to deal with.

Plus, fans can expect to spend much more time with their daughter Brianna (Sophie Skelton) and her husband, Roger (Richard Rankin), as well as surrogate Fraser Young Ian (John Bell).

On the Official Outlander Podcast, Matthew said: “That’s a luxury we haven’t had since season one.

“I remember when we went from one to two we chopped off those three episodes.

“When you have the amount of space and you don’t have it anymore you go, ‘Man, what are we going to do?’”

Outlander’s season length has been in constant fluctuation ever since it aired in two parts of eight for its first season in 2014 and 2015.

“And then we went down to 12, which is even… that 13th episode was always the finale,” Matthew continued.

“We could go, ‘alright, let’s build to this. We can blow it out’. Even some of those were extended episodes.”

Moving from 12 to just eight episodes clearly proved a challenge for Outlander’s writers this time around.

Although the 2022 instalment was well-received by fans, many of them were frustrated when the story was left incomplete by the season finale.

Thankfully, viewers won’t have the same problem with the next outing, which is expected to include the conclusion to Outlander book seven, An Echo in the Bone.

Caitriona, Sam and the rest of the cast are currently back in production in Scotland, so it shouldn’t be too long before an official premiere date is set for the Frasers’ next adventures.

Outlander seasons 1-6 are available on Starz in the USA and StarzPlay.