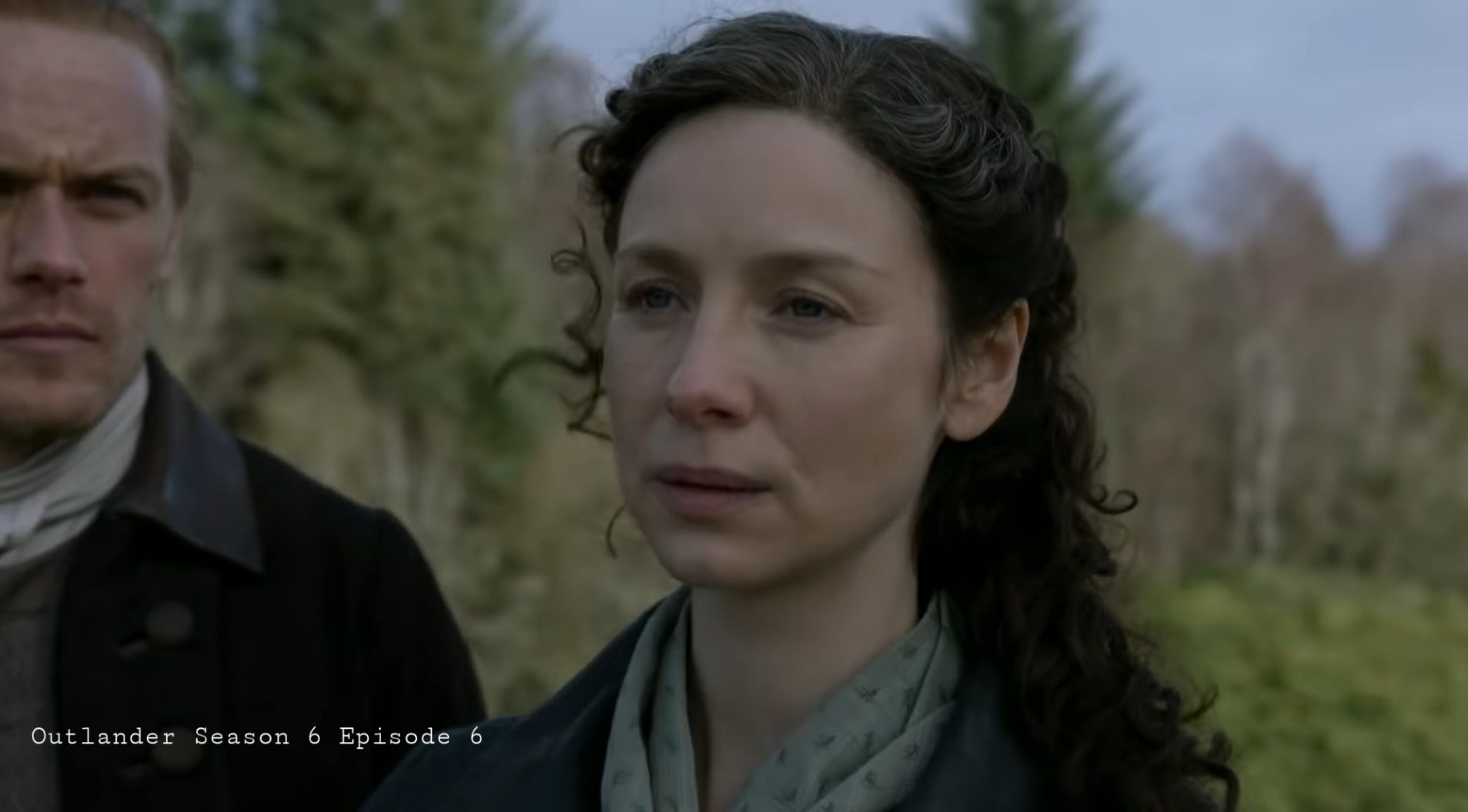 **SPOILERS AHEAD FOR OUTLANDER SEASON 6, EPISODE 6**

Talk about a cliffhanger! Episode 6 of Outlander’s sixth season ends with Malva Christie lying in the Frasers’ garden, throat slit, and a sobbing Claire cradling her dead baby following an unsuccessful C-section.

This dramatic twist is a game-changer for the drama, throwing up a whole host of questions, the most burning one being: who murdered Malva? Is it the same person who fathered her child?

And, given the events of the episode, will suspicion fall on Claire, or perhaps Jamie, in turn endangering their place on the Ridge – or even their lives? Malva has disrupted the happy Fraser home long before someone left her bloody corpse in the flowerbeds, so outsiders could be forgiven for jumping to such a conclusion, however far-fetched it may seem.

Viewers have had their suspicions for a few weeks now as the manipulative young woman – seemingly a devoted apprentice to Dr Claire – began to seduce several men and to fixate on Claire and Jamie’s affectionate union, even spying on them while they made love.

We also know Malva had a slippery relationship with the truth. When Roger MacKenzie caught her with a boy, she threatened to tell everyone – falsely – that she’d seen him kissing widow Amy McCallum if he didn’t keep quiet. And, most disturbingly, Malva had been chopping off the fingers of a dead man to use in a love spell.

But she didn’t need witchcraft to wreak havoc in this latest thrilling episode, just a well-crafted, devastating lie. It all began with an epidemic of sickness on the Ridge, which Claire diagnoses as amoebic dysentery. Before long she’s fallen ill herself, and, while in a feverish state, she – and us viewers – glimpse Malva comforting a devastated Jamie.

Claire does recover, but wakes to find her distinctive hair chopped off. (Caitriona Balfe, of course, still looks supermodel beautiful, but for the sake of the story we must believe this is Malva’s concerted attempt to make her ugly.) But it gets worse: Claire becomes suspicious that she and Tom Christie were in fact poisoned instead.

And then Malva drops the bomb, stunning everyone by declaring that Jamie is the father of her unborn baby. He didn’t rape her, she stresses, knowing that that would never be believed, but claims the pair became intimate while he was emotional during Claire’s illness.

It’s a fantastic moment where Outlander goes full soap opera, more than paying off the gradual build of this slow-burn season. The impact is so huge because it challenges the very bedrock of the whole show: the all-powerful, centuries-spanning Fraser marriage. But could Jamie have actually cheated? Just for one moment, a shattered Claire thinks it might be true – and viewers might wonder too.

If Jamie really was capable of infidelity, it would shift our entire view of this noble romantic hero. And, as a furious Claire points out, it would make her question every decision she’s made: risking everything to return to Jamie – and to a more precarious existence – which then brought Brianna, Roger and their son into the past too. Her whole life would be a lie.

Jamie doesn’t really help matters by choosing this moment to confess that he has cheated – but not with Malva. Instead, he spent one night with someone else before going to prison, long ago (and when separated from Claire by 200 years). Points for honesty, just not the best time for that particular heart-stopping admission. Still, the scene is spectacularly well-played by Balfe and Sam Heughan, drawing on the rich history of their relationship.

Even if Claire does eventually believe him, the rumour about Jamie sleeping with Malva spreads like wildfire – and is impossible to quash. It pays off another carefully constructed plot thread about changes on the Ridge. Since the arrival of the Christies and the fisherfolk, the Frasers have lost their status as de facto leaders – especially since the superstitious fisherfolk think Claire’s doctoring is unnatural. Now, they’re pariahs on their own land.

It’s a clever bait and switch after we’ve been warned so much about the dangers of the upcoming Revolutionary War. That should still feature heavily in future Outlander instalments, but surely now the season finale will centre on conflict at home, not on the battlefield.

This storyline impacts multiple other characters, too, like Young Ian, who was one of the men Malva slept with, and who is now fighting to defend the family’s honour. It also shakes Brianna’s faith in Jamie; she believed her other father, Frank Randall, was a good man, but found out later in life that he’d had multiple affairs. Meanwhile Roger has only just realised the reputational danger he’d placed his family in by spending so much time alone with Amy MacCallum. There’s also Tom Christie, whose simmering feud with Jamie has become all-out war, and Malva’s volatile brother Allan.

But perhaps the most significant challenge will be Claire having to face her own demons. She’s been in a bad way this season, constantly self-medicating with ether to combat traumatic memories of her assault by Lionel Brown and his gang. In fact, she might have saved Malva had she not chosen to take more ether instead of speaking to her – a decision that will surely haunt our dedicated healer.

So, will this be the wake-up call Claire needs, or will it push her over the edge? Either way, Outlander is now set for a thoroughly gripping climax.