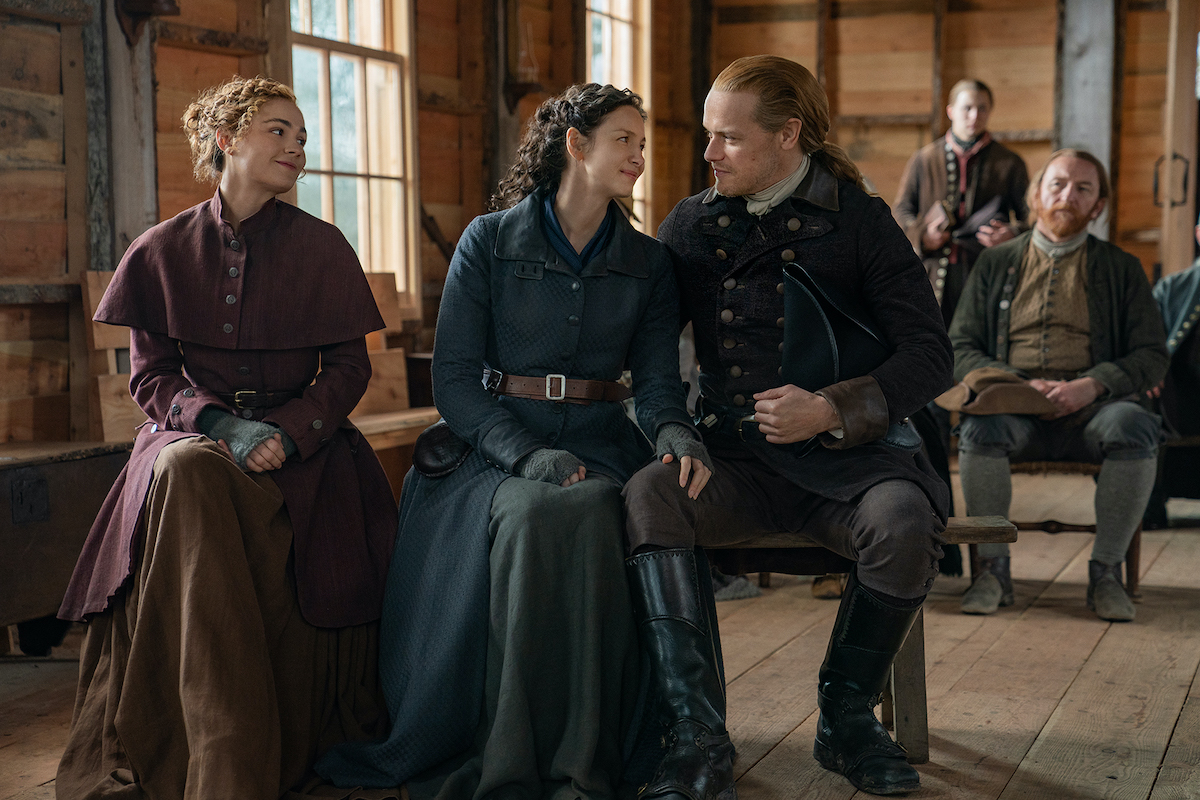 Outlander season 6 is currently in post-production and will be ready to premiere on STARZ in early 2022. In the meantime, the time-traveling fantasy drama has been teasing the new season with first-look images on social media.

Some fans have noticed that the new photos seem to indicate that big changes are coming for Roger MacKenzie (Richard Rankin).

Fans will recall that at the end of season 5, Briana (Sophie Skelton) and Roger attempted to travel back to the 20th century via the stones in America. But that time portal didn’t work as expected, and the duo — along with their son Jemmy — remained in colonial America.

But according to chatter from the Outlander set, they will successfully travel back to the future in the upcoming season. The latest intel claims Briana and Roger’s cabin at Fraser’s Ridge has been deconstructed.

“Took a trip to Doune and popped into see old Fraser’s Ridge,” read one tweet from the Outlander set. “Unfortunately it’s now being dismantled. There was also a small cabin built which I was told is Bree’s workshop but this has also been dismantled now.”

There could be a very simple explanation

Fans on Reddit have been discussing exactly what this could mean. Or, if it means anything at all. User hiddkesbatchunited noted that the cabin had been dismantled for shooting on set, not as part of an upcoming storyline. They pointed to this as proof that the MacKenzie’s are going “back to the future.”

Others insisted that the cabin removal happened simply because filming for season 6 had wrapped. But one fan pointed out that the cabin has remained standing in between previous seasons.

“I found some tweets from the locals saying the cabin isn’t there anymore, while, I think, it still stood in its location in-between the other seasons,” the fan shared.

Will Roger have a brand new role on ‘Outlander’ in the upcoming season?

Behind-the-scenes photos from season 6 of Outlander seem to indicate that Roger will have a brand new role when the series returns next year. One image shows Briana, Jamie Fraser (Sam Heughan), and Claire Fraser (Caitriona Balfe) in a church. But Roger is nowhere to be found. 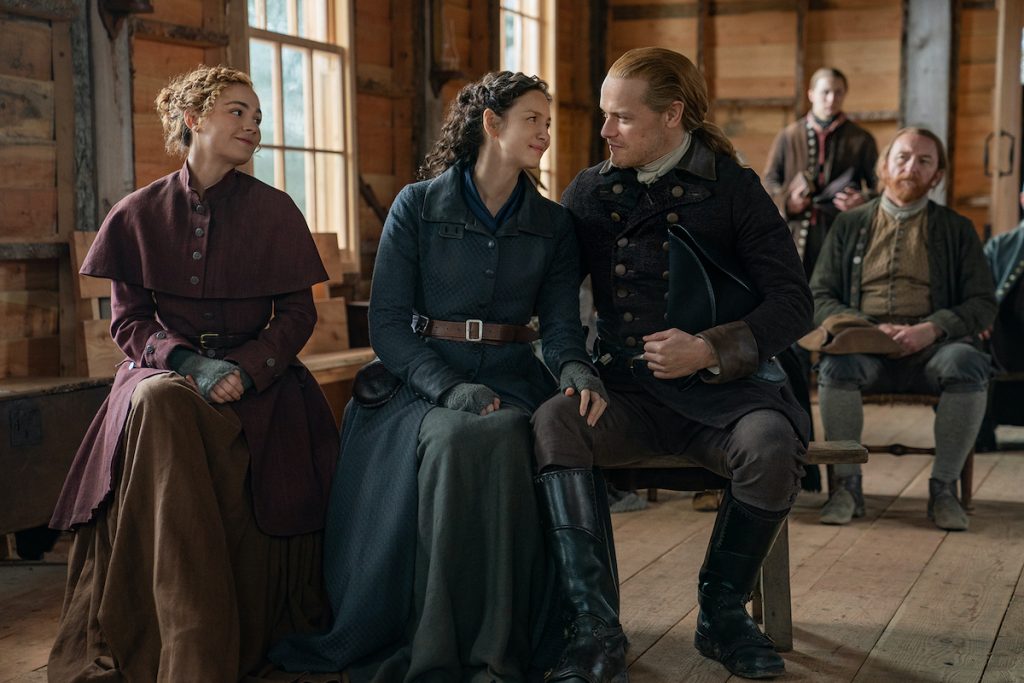 Fans of the Outlander books are pretty sure this means season 6 will see Roger follow in his father’s footsteps and lead the church at Fraser’s Ridge. Just like in the novels. They believe this is the reason that Roger is not shown in the church’s congregation.

Fans are excited for ‘Reverend Roger’

After seeing the season 6 photo from the church, many fans are excited for the arrival of “Reverend Roger.” He will attempt to keep up the morale in the community as America inches closer to the Revolutionary War.

In another image, fans noticed that another major turning point for Roger from the books appears to be coming in season 6 — the arrival of Henri-Christian. In Diana Gabaldon’s Outlander novels, Roger rescues a baby born with dwarfism from a stream.

“The promotion photos though, Henri-Christian is here guys,” one fan wrote. A second added, “I noticed that! I’m so glad… I really love that scene in the books, Roger going all mama-bear.”

Season 6 of ‘Outlander’ will be a short one

Because of the production issues caused by the pandemic, Outlander season 6 will only be eight episodes long. With a special 90 minute premiere episode. Because of this change, it’s not clear just how much of Gabaldon’s sixth book — A Breath of Snow and Ashes — will make it into season 6. 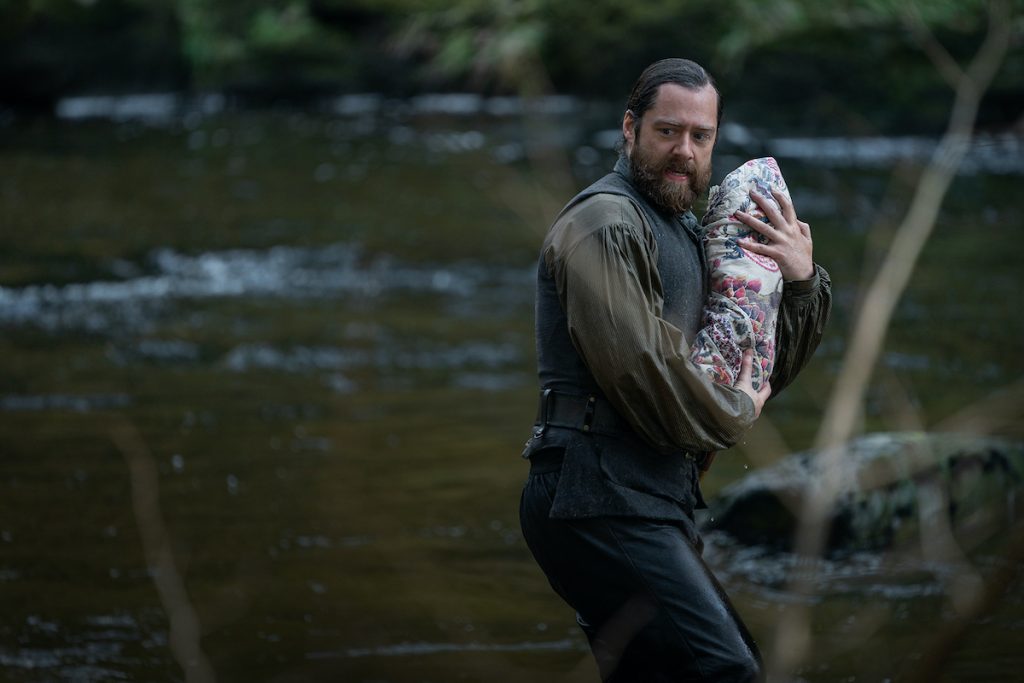 Chances are, some of those storylines will be part of season 7. Showrunner Matthew B. Roberts says that season will be extended and feature 16 episodes. It’s not yet known if Roger and Briana will make it back to the 20th century in season 6. Or, if they will hold off on that storyline until the super-sized season 7.

Seasons 1 through 5 of Outlander are available.