It’s been a very short season of Outlander this year, but an awful lot has been packed into these eight episodes, from revelations about Young Ian’s time with the Mohawk and Fergus’s heartbreaking suicide attempt, to Claire’s mysterious fever and her growing dependence on ether to cope with PTSD.

Of course, the biggest shake up to Fraser’s Ridge came in the form of the Christie family, and by the end of episode seven, Claire stood accused of pregnant Malva’s murder, following accusations that Jamie was the father of her unborn baby.

Let’s unpack what happened in that tense season finale (and it goes without saying that this contains spoilers):

What happens to Claire and Jamie?

The season finale begins with a dialogue-free scene set in an American diner in the 20th century, with Claire (we know it’s her because you can see her Fraser wedding ring) and presumably a teenage Bree (hidden behind a menu) being served burgers and fries. It may be a brief scene, but the significance of this becomes apparent a little later on.

Back in the 18thcentury, the episode picks up where the previous one left off as the Committee of Safety arrive at the Fraser house to arrest Claire.

She’s understandably reluctant to go with them – not just because they seem like foaming-at-the-mouth gun-toting vigilantes, but also because their leader is Richard Brown, the gruff brother of the late, evil Lionel, who kidnapped and raped Claire in season five (and has been the grim figure taunting her in her nightmares this season).

Claire whispers to housekeeper Mrs Bug to run for help, and Jamie spots Lizzie and Josiah in the distance scuttling away, hopefully to gather more family members to protect them. They can’t come soon enough, though, as one of Brown’s men has already made it inside the Fraser home. Claire shoots him, while Jamie tries to fight off the men outside.

Soon their home is under attack, and Jamie and Claire dash around blocking windows with dining tables (though we think they should have blown out the candles on it first) and other bits of furniture as shots break windows, plates and all the other nice things in their home.

Jamie is convinced Richard Brown is there for revenge after the death of his brother, but Brown says he just wants to take Claire to Salisbury where there is a court so she can stand trial for Malva’s murder. Jamie refuses, and it looks like the Frasers are going to spend a long night under siege with the Committee waiting outside.

So where is everybody else? Well, Brianna, Roger and son Jemmy are on a long journey to get Roger ordained as a minister. Meanwhile, Fergus, Marsali, and their ever-growing brood are living in New Bern, where Fergus is running a printing press and has just published his first newsletter, the New Bern Onion (named because it has many layers, you see). 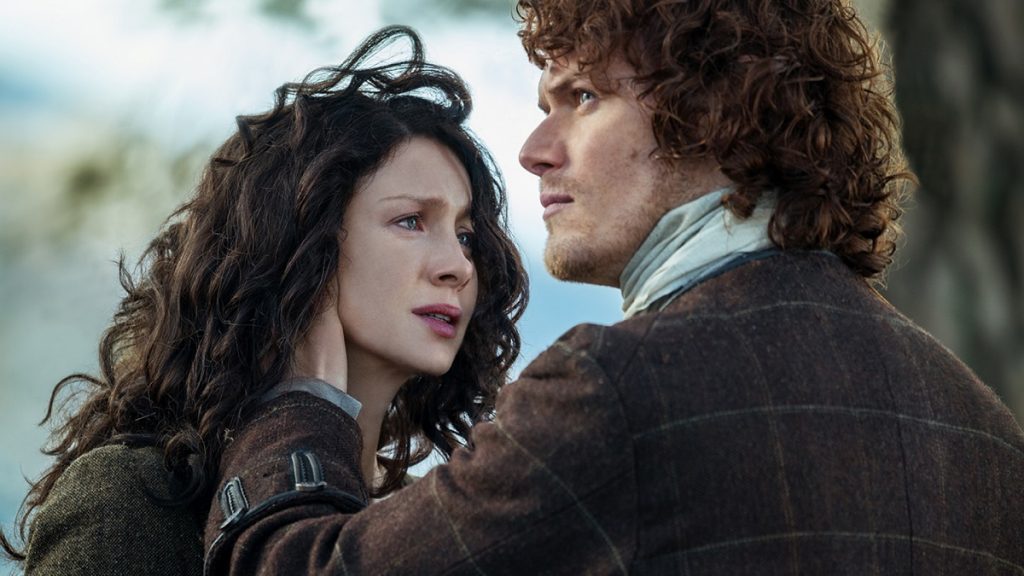 There’s no sign of Young Ian, either, so Claire and Jamie are left inside the house calmly having dinner (probably realising they may never get the chance to eat again) while waiting for the next attack.

For some light dinner conversation, Claire explains the concept of a death row prisoner’s last meal to Jamie, and she reveals her choice would be a cheeseburger, fries and a Coke from the diner she used to go to with Brianna – a nod back to that opening scene. Are the Outlander team trying to tell us that Claire could be eating her own last meal before being condemned to death?

It’s all looking pretty dire – though fans of adorable cat Adso will at least be relieved to see he has survived the assault on the house – and it doesn’t get much better when locals armed with burning torches arrive to help the Committee.

A handful of kinsmen turn up to support Jamie and Claire but there aren’t enough of them, and Jamie realises the only option is for him and Claire to both go with the Committee to Salisbury.

Surprisingly, Malva’s father Tom Christie steps in to promise Claire and Jamie’s safety on the journey, and he suggests they leave in the morning so the couple get to spend the night in their own bed. Cue some late-night steaminess between the Frasers – who presumably feel that their chances of sex in the future are about as likely as another meal.

The next day, the posse – with Claire and Jamie in a wagon – head off to Salisbury, but Richard Brown’s plan quickly changes when he discovers the local sheriff has quit and there is no court being held there.

He decides the next nearest town, Cross Creek, isn’t an option due to Jamie’s aunt Jocasta’s influence there, so Wilmington becomes their destination even though it is 200 miles away.

An increasingly gaunt Tom Christie looks guilty at what Claire is being put through – especially when they hear Brown has spread the word far and wide that Claire is a murderess, resulting in the couple’s wagon being stoned by raging villagers – could this be because he knows Claire is innocent, and also who really killed his daughter Malva? 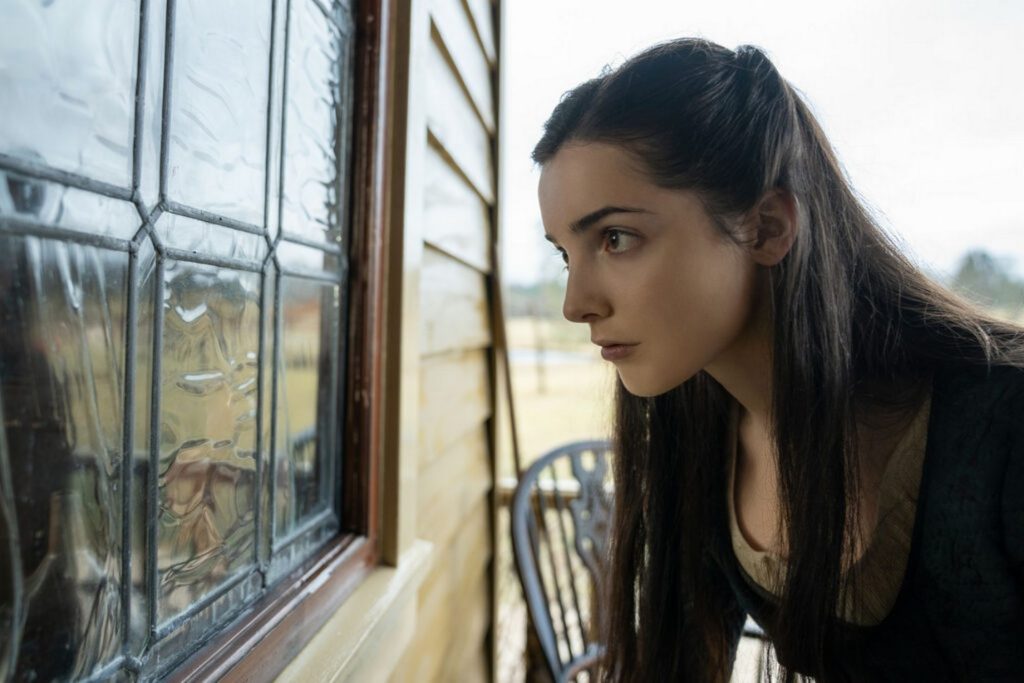 Oblivious to all this hundreds of miles away, Roger and Bree are dealing with something far more mundane: it appears little Jemmy has a case of nits. Once they chop off all his hair as a treatment, Brianna spots a mark on her son’s head that she hasn’t seen before. She’s concerned but Roger isn’t – as he has the same one. The SAME ONE!

In case we’d all forgotten, Roger was never sure he was Jemmy’s biological father, because Bree was raped by Stephen Bonnet on the same night she first slept with Roger. The mark – since it is hereditary – proves Jemmy is definitely Roger’s son. So at least someone is having a jolly time.

Jamie and Claire, meanwhile, are far from happy, but things are looking up as Young Ian appears from behind some bushes to let Jamie know he, hirsute pal John Quincy Myers and some friends are nearby. Jamie and Claire can’t escape, however, as it’s too likely that local people who are looking forward to an entertaining hanging would turn them in if they saw them.

Perhaps Jamie should have trusted Ian to get them safely away anyway, as next morning Brown’s men grab Jamie and Brown whisks Claire away in the wagon, determined to get her to Wilmington and the gallows waiting there.

Tom Christie tries to intervene, and makes Brown promise that Jamie will not be harmed before accompanying Claire to make sure she is not killed on the journey.

Days later, they arrive in Wilmington, which is showing signs of unrest as residents struggle for independence against the British. Brown takes Claire to jail and declares he will see her hung, though Tom Christie promises that he will not leave her unprotected – not exactly the actions of a man who thinks Claire killed his daughter.

So why hasn’t Jamie come to save Claire? Well, he’s a bit tied up (literally) with Brown’s men, who are preparing to put him on a boat to Scotland to get rid of the feisty Highlander once and for all.

They haven’t counted on Young Ian’s daring rescue, though, and our Mohawk-haired hero appears with Myers and their Indian friends just in time, sending a bullet through the hand and head of one baddie holding Jamie.

The series ends with Ian, Jamie, Myers and friends riding across the beach, presumably in the direction of Wilmington and an imprisoned Claire.

So will Jamie get to Claire in time? And who did kill Malva? It looks like we will have to wait until season seven next year to get some answers…

Outlander season 6 streams on STARZPLAY in the UK and Starz in the US with new episodes every Sunday.