Starz has found its next William Ransom as Canadian actor Charles Vandervaart (Lost in Space) takes on the key role in Outlander‘s forthcoming seventh season.

Fresh off of the Season 6 finale, Outlander may be on airing hiatus, but the team behind the fan-favorite fantasy drama is hard at work on the next chapter which will feature more of Jamie Fraser’s (Sam Heughan) secret son, William. As viewers will recall, in Season 3, during the years when Jamie and Claire (Caitriona Balfe) were separated by time, Jamie fathered a son who ended up in the care of close friend Lord John Grey (David Berry).

Raised by his stepfather, Lord John Grey, William is the ninth Earl of Ellesmere and will play a key role in the show’s latest chapter. In Season 7, William arrives in Wilmington full of patriotic zeal and enthusiasm to join the British Army amid rising revolutionary tensions. 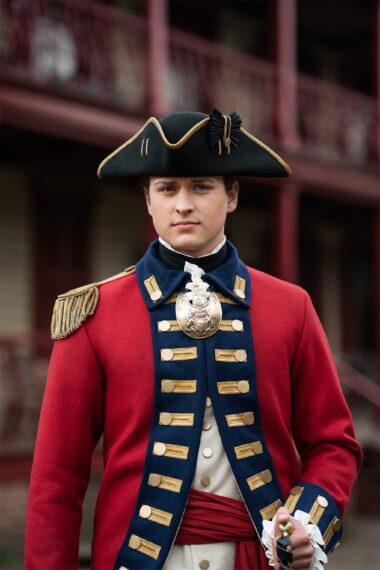 And while William has met Jamie and knows who he is, the young man isn’t aware that the Scot is actually his biological father. On the surface, William Ransom is a courteous aristocrat but simmering under the surface is a Highlander’s fire that resembles his father’s own.

“We are happy to welcome Charles to the Fraser family for season seven of Outlander, joining the cast with the other talented actors that bring our stories to life,” says Matthew B. Roberts, showrunner, writer, and executive producer. “Scotland will again be our production home as the Frasers and MacKenzies try to make a home against the backdrop of the Revolutionary War. This season promises more adventure, time travel, and emotional peril than any season before”

Adding to the sentiment, fellow executive producer Maril Davis says, “The character of William Ransom is a wonderful role, and one fans have been eager to see. Finding someone with the talent and physicality to play Jamie’s son was a daunting task, but Charles’ charisma was evident during the audition process and we are excited to see what he will bring to William’s multi-layered journey.”