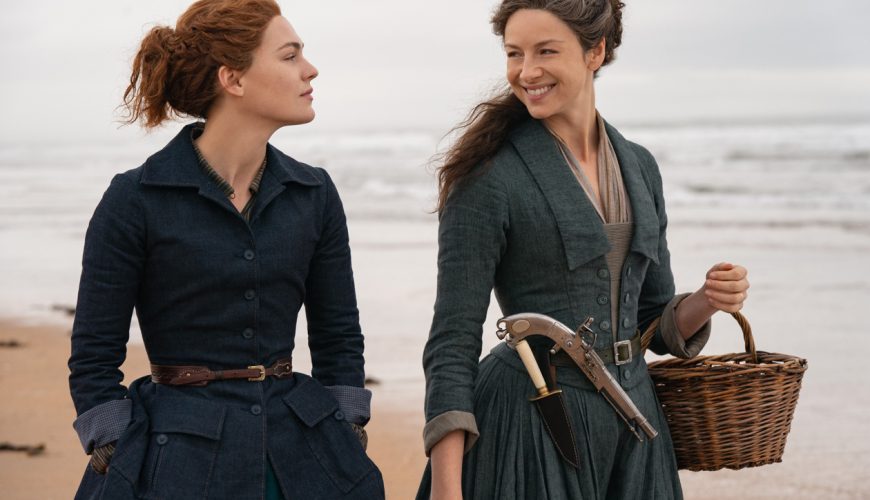 Outlander stars Caitriona Balfe and Sophie Skelton had some touching words of praise for one another when they sat down for a Q&A about the hit Starz drama earlier this year.

Filming for the seventh season of Outlander is still underway in Scotland, with new episodes expected to hit screens next year. Before Claire Fraser (played by Caitriona Balfe) and her husband Jamie (Sam Heughan) return to Starz, co-star Sophie Skelton had some kind words for the lead actress during their recent chat on Instagram.

Brianna Fraser star Sophie has revealed how much Caitriona fought for the supporting cast and crew on the set of Outlander.

Sophie and Claire were asked by a fan what they had learned from working with each other during their time on the historical drama.

When it came to Sophie’s turn to answer, she revealed Caitriona had a knack for ensuring the show’s crew – as well as the cast – were all comfortable and catered for.

She recalled: “I think, from you, it would probably be the fact we work in such tough conditions and people can often forget about the crew or [supporting artists] and what they’re going through.”

“You are very, very good at taking care of everybody and fighting for them to have, you know, heaters and making sure everybody is taken care of.

“It’s a big credit to you because not a lot of the other ones would even think about it.”

Caitriona replied: “Well, the show doesn’t get made without them.”

In addition to the show’s all-star cast, which also includes Richard Rankin as Brianna’s husband Roger, Outlander is made possible by a huge team of producers, crew and extras.

Without naming names, Sophie suggested not every member of the team is quite as conscientious to the crew as the series’ lead star.

“Exactly,” Sophie agreed. “Exactly, but some people aren’t that cool!”

“And they are very integral and important to the whole process,” Caitriona added.

“Anyone who’s a first [assistant director] or anyone who’s a producer, anyone – remember to look after everybody.”

As for Caitriona’s tribute to Sophie, the Claire Fraser actress gushed about how well her on-screen daughter was able to remain calm under pressure.

“It’s such a good lesson,” she said. “You’re very methodical in your dissection of things and why it isn’t working.

“But you’re very, very calm when you’re trying to find solutions. And I have definitely tried – I’m still trying! – to absorb some of that.”

Unfortunately, it didn’t take long for Caitriona to get back in Claire’s tight corsets as filming for Outlander season seven got started in May of this year.

Fans can expect even more from the Frasers this time round, as Starz will be treating viewers to a 16-episode season to make up for this year’s shortened outing.

My name is Damyan Ivanov and i was born in 1998 in Varna, Bulgaria. Graduated high school in 2016 and since then i'm working on wordpress news websites.
Caitriona Balfe, News, outlander, Sophie Skelton, TV Series