Season six of Outlander is now on the horizon, with Starz confirming it’s due to air early next year.

It seems the hit show’s cast and crew are getting quite excited, and, as the promos for the new season begin to ramp up, Sam Heughan couldn’t wait to share the first images of a rather dapper-looking Jamie Fraser.

However, it wasn’t long before Sam also shared it adding: “JAMMF looking pensive, waiting for Droughtlander to be over….” 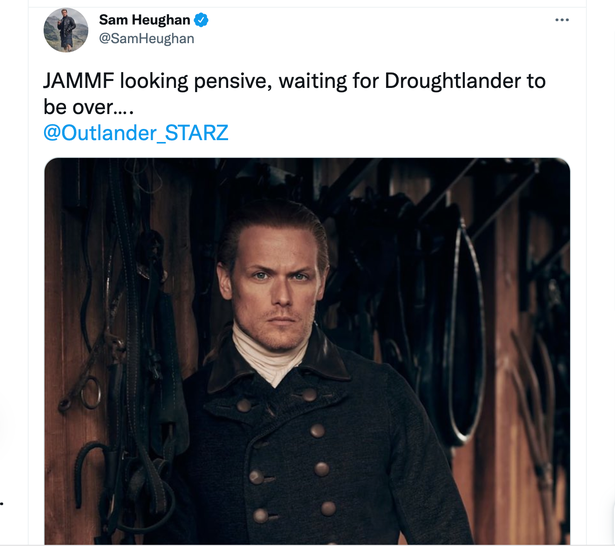 The post delighted fans with many of them rushing to offer their appreciation to their favourite Highland warrior.

One wrote: “This is what I call the very Essence of the Divine Masculine.”

While another added: “I have a feeling I’m going to love S6.”

Even the official Starz account got in on the act posting: “Packing my bags to move to Fraser’s Ridge!”

But in true Outlander cast fashion, it wasn’t long before one of his co-stars was poking fun at his post.

This time it was fellow Scottish actor Steven Cree, who played Ian Murray, who waded in with a hilarious response.

It’s the kind of fun back and forth we’ve come to expect from such a close-knit team and really highlights what fans love about them.

The official Outlander page then quipped: “Now I can’t unsee it…”

Another fan added: “Your [sic] a naughty boy Steve and here’s thinking you always have Jamie’s back.”

To which Steven replied: “I love Sam’s back.”

Fans were loving the exchange with many telling Steven they missed him and stating that they can always rely on him for a laugh.

One person summed up the exchange: “The art of destroying a sex symbol in two seconds.”