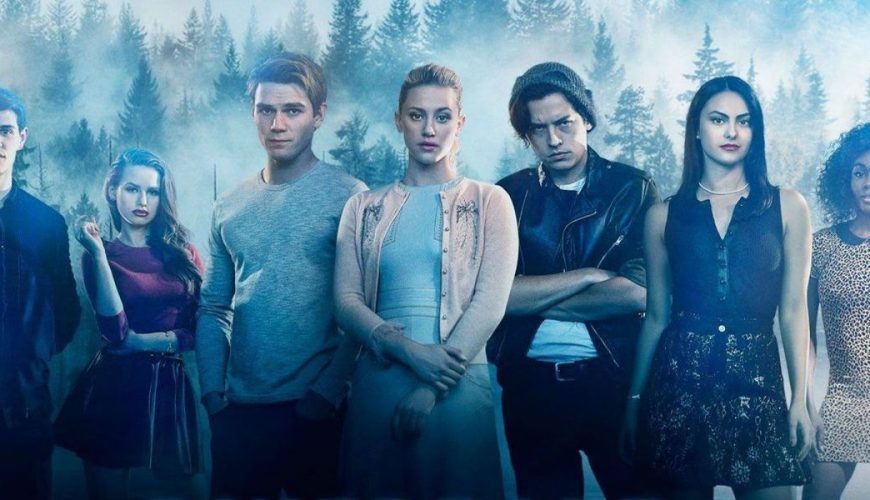 Riverdale’s 6th season is well underway and with the season and its mysteries in full swing, The CW has released a new poster for the series. The new Season 6 poster features Archie Andrews (K.J. Apa) standing in Sweetwater River while his friends and much of the show’s main cast stand on the banks behind him. However, the poster takes on an eerie tone thanks to its color scheme, which makes the sky overcast and red and the red tone to the water makes the river look like it’s full of not water, but blood.

Currently on Riverdale, Archie and his friends are dealing with the presence of Percival Pickens’, the descendant of one of Riverdale’s founders who has the town under his thrall. This week’s upcoming episode, “Chapter One Hundred and Five: Folks Heroes”, will see Archie attempt to take the town back by becoming a modern-day folk hero after he takes on a series of impossible feats — with winner takes all stakes when it comes to the town.

“THE WORLD’S TOUGHEST MAN — To get the town of Riverdale out from under Percival’s (guest star Chris O’Shea) grip, Archie (KJ Apa), Jughead (Cole Sprouse) and Betty (Lili Reinhart) devise a plan to turn Archie into a modern-day folk hero by performing a series of impossible feats. Meanwhile, Percival takes aim at Veronica (Camila Mendes), Toni (Vanessa Morgan) and Tabitha (Erinn Westbrook), pitting them and their businesses against one another. Finally, after falling ill, Cheryl (Madelaine Petsch) makes a surprising discovery about herself. Mädchen Amick, Charles Melton and Drew Ray Tanner also star. Gabriel Correa directed the episode written by Devon Turner.”

Think you know #Riverdale? Stream a new episode free only on The CW: https://t.co/LWIRBSp7Ue pic.twitter.com/hXoJElC4iZ

Riverdale was recently renewed for Season 7 along with a handful of other series on The CW, though series star Cole Sprouse recently said that most of the actors on the fan-favorite series are ready to wrap Riverdale and its mysteries up “with a bow”.

“I’m not a creative force behind [Riverdale]. I actually have no creative control,” Sprouse said of working on the series. “We show up, receive the scripts often the day of, and we’re asked to shoot.”

It was also recently announced that Kiernan Shipka will be returning to Riverdale this season as Sabrina Spellman. No details were provided about the character’s return, though the Shipka did appear during the five-episode “Rivervale” event that kicked off Season 6.

Riverdale airs Sundays at 8/7c on The CW. “Chapter One Hundred and Five: Folk Heroes” will air on Sunday, April 17th.