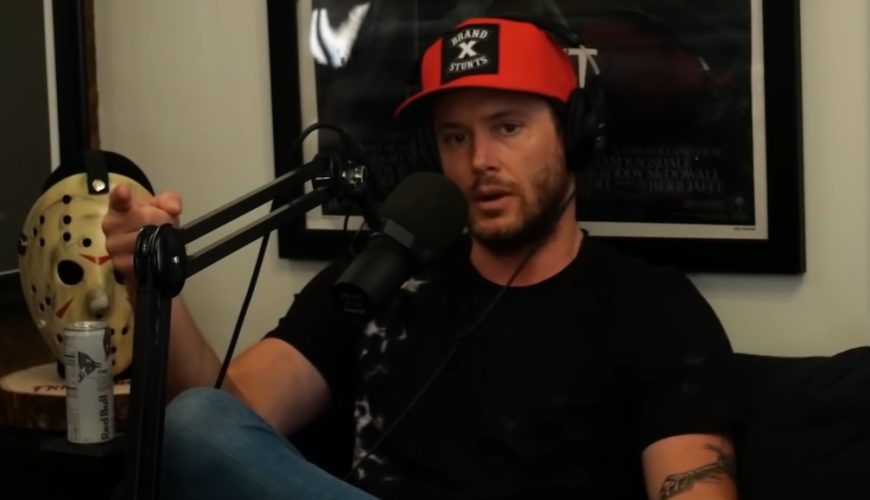 With Amazon & showrunner Eric Kripke’s The Boys set to officially return for its third season on June 3rd and a teaser already out amongst the masses, to say that there is serious interest in seeing Jensen Ackles’s (Supernatural) Soldier Boy in action would be a serious understatement.

Now we’re learning a lot more about the experience from none other than Ackles himself, who returning to Michael Rosenbaum’s Inside of You podcast to check in with how things have been going since the last time he visited the show. From additional insights into the finale to what the future could look like for Supernatural fans (we’ll have more on that this week), Ackles also discusses the strong bond he shares with Jared Padalecki, what it was like finally getting to take on the mantle of Batman, and more. But it was his insight into The Boys that’s definitely worth your time, as Ackles offers a bit of Soldier Boy’s Season 3 backstory and explains how a phone call to Kripke to get approval for the SPN prequel “The Winchesters” led to Kripke pitching him Soldier Boy. We also learn about the video audition process he went through (including taking on the role of Butcher), what it is about Soldier Boy that attracted him to the role, and more (with the full interview embedded below).

Jensen Ackles Offers Some Season 3 Backstory: Emphasizing once again to anyone who still has doubts, Ackles describes his Soldier Boy as a “jackass” while also revealing a little backstory on how his supe first enters the scene. “So what happens is- I don’t think this is any secret, I’m not giving anything away- they kind of find me and I’ve been essentially in captivity for a while,” Ackles explained. “And so when they do, I’m bearded and I look like castaway but then they clean me up and I get my superhero outfit back on and I go to town.”

How COVID & the “Supernatural” Prequel Led to Soldier Boy: “I was calling Eric Kripke, who is the showrunner on ‘The Boys’, right? Who also created ‘Supernatural’, right? I was calling him to talk to him about ‘The Winchesters’ and at the end of our conversation- because he owns that IP and because he created those characters so I literally had to call him and get him to sign off. Now they kicked it over to business affairs at Warner Brothers and his lawyers, and they got together and they did their thing. I need to get Krippy [Kripke] to sign off on us using those characters for this prequel, and then at the end of that conversation, I said, ‘Well, hey man, ‘Supernatural’s’ wrapping up here or it’s gonna be wrapped up because this was during the break when we broke for COVID and it was before we came back to shoot our last two episodes. And I was like, ‘I’m gonna be unemployed pretty soon so whenever you’re ready for me to come on over to ‘The Boys’ just let me know. And he was like, ‘Hey man if you want to come over to ‘The Boys,’ I’ll write you a part just like that. I got no problem with that. And I’m like, ‘Yeah dude, I’d love to come over there. I love that show,’ and he goes, ‘Well, hang on.’ He’s like, ‘I don’t know if I want to bring you in for just a bit part.’ He’s like, “There’s another role… I’ll tell you what. I’m going to send you over some material. Take a look at it, let’s talk tomorrow. I was like, ‘okay’ so he sends me over Soldier Boy and I read this material and I was like, “yes.”

What Attracted Ackles to Soldier Boy: “He’s a grandpa, right? He’s from the ’40s, like he fought in World War II and he’s just this curmudgeon bigoted [ __ ] and he doesn’t age so he’s this young… you know… 40-year-old superhero who’s really 80 years old or 90 years old and there’s just so much material there and you’ll see what I mean when you see the show. But he has a ‘taste’ for people that were of his era and so it was a no-brainer.”

But Ackles Wasn’t Given Soldier Boy- He Worked For It: Ackles wasn’t everyone’s automatic first choice for Soldier Boy. Ackles explains that the studio was “talking to some much bigger names” so Kripke got Ackles to put together an audition tape he could show to Sony to help him make his case. The two would work together on the video through four drafts before Kripke felt the footage was ready to be screened. But if Kripke was going to put his name & reputation behind Ackles getting the role, Ackles wanted to make sure he was giving Kripke the strongest evidence to work with. “I was like, ‘Look, if you’re gonna go to bat for me, I want to give you the biggest bat I can so tell me if there’s anything else I can do. He’s [Kripke] like, ‘You’re good’ and so he went to bat for me and then ‘boom’ that was it. But I worked for it. It wasn’t just like, “Hey, we want to bring you on for season three.’ No, had to earn this one. You have to earn a lot. I think people think that a lot of things are given to you. No, you have to fight for them and this is how I had to do it.”

Release The #AcklesAsButcher Tape, Kripke! “The audition scene that I had to do was a scene with Soldier Boy and Butcher, played by Karl Urban, where we’re in court. We’re in lockdown… this is Summer 2020… and all I’ve got is two, three-year-olds, a seven-year-old, and my wife, and I’m like, ‘No one can read Butcher’ so i pre-recorded Butcher doing my Butcher voice and then had Danneel [Ackles] off to the side pressing ‘play’ and ‘pause.’ So I was giving my lines as Soldier Boy and then hearing my pre-recorded Butcher lines back to me, right? But this is the kind of [ __ ] you got to do when you’re trying to get a job that’s awesome.”

Does Soldier Boy Have a Future? Of course, Rosenbaum has to ask about Ackles’s potential future with the Amazon series. And, of course, Ackles had to keep things vaguely hopeful. “I don’t know. The door is not closed, we’ll put it that way, right? So it’ll depend on how it all cuts together as you know.” That said, Ackles did say that Kripke gave him the heads-up that things “looked great” and that he’s gotten good feedback from others who’ve seen the footage (though Ackles hasn’t seen a cut personally).

My name is Damyan Ivanov and i was born in 1998 in Varna, Bulgaria. Graduated high school in 2016 and since then i'm working on wordpress news websites.
Dean Winchester, Inside of You, Jensen Ackles, Jensen Ackles podcast, Michael Rosenbaum, News, soldier boy, Supernatural, The Boys, TV Series