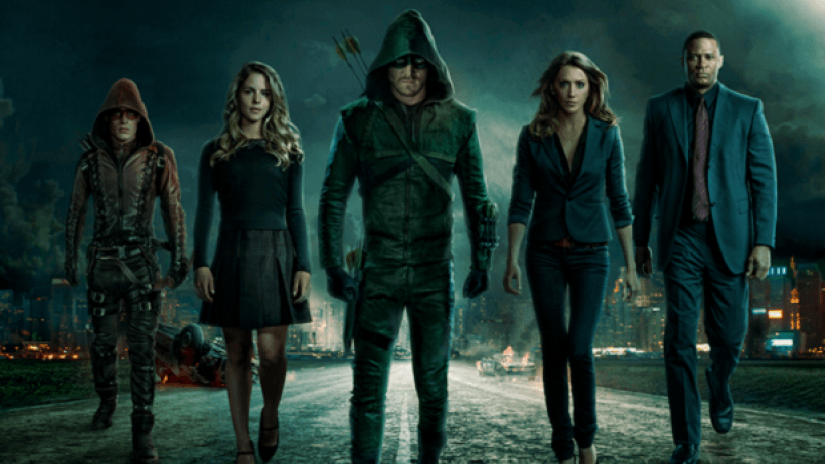 Arrow fans, it’s so hard to wrap our heads around the fact that we are inching closer and closer to the end. Honestly, I am not ready for it, and I’m so, so nervous about what is going to happen on Crisis on Infinite Earths. Like a lot of other fans, my deepest fear is that Oliver Queen/Green Arrow, played by Stephen Amell, is going to die.

In its final season, Arrow has already given us some incredible OMG moments, including the most recent one with Oliver’s grown kids — William and Mia — showing up in the present…which is their past. It’s all very confusing, but still, OMG-worthy.

The episode following that epic cliffhanger was an emotional rollercoaster as everyone tried to figure out how the kiddos time traveled from 2040 to 2019. All we know is that there was a flash of light and then suddenly everyone was together. Naturally, this is a jarring thing for Team Arrow, with no one more taken aback than Oliver himself.

Ever the amazing human and father, Oliver shares a very beautiful moment with William during the episode. Trust me, you’ll need lots
and lots of tissues to watch the clip below:

Amell took to Twitter to share that this scene between Oliver and William was his favorite from the final season, which is saying a lot. But I’m not all that surprised because it’s so incredibly raw and real, with both Ben Lewis (William) and Amell bringing their all to it.

My favorite scene of this season. So lucky to share it with @benlewishere — https://t.co/CUCmr2TEwJ